Ukrainian women have always been very creative with their clothing, jewelry, and accessories. There are dozens of arty-crafty headdresses or at least elaborate ways of draping even the simplest headpieces. But this particular headdress is truly unique – it was worn by married women only in a small area and, today, it is almost vanished. But why is this accessory interesting and special? Because women were banned to wear it to the church in the 19th century. Strange, isn’t it? Let’s find out why.

One of the unique Ukrainian headwear pieces is called “kaptur”. It consists of a skull-cap (called “ochipok”) embellished with embroidery at the top and a long piece of sheer cloth (called “namitka” or “naframa” in this region) wrapped around the head with long ends hanging down. This headdress is typical only for a certain small area in Central Ukraine called “Eastern Podillia”. Nowhere else in the world and even in Ukraine, you can find the same headpiece.

The skull-cap is rather high. It is decorated with embroidery only at the top because the sides are covered with naframa, which is made from extremely sheer, thin cloth. In the past, such a fabric was rather hard to produce, so it was expensive. This linen cloth was handmade and very delicate – made from a special kind of flax using a certain technique of stretching the fabric. The process was long and laborious. By the way, this kind of flax is extinct and only a handful of modern artisans managed to recover the old technique of producing this fabric called “serpanok”.

These headdresses were worn by married women. Later, they were replaced by simpler kerchiefs. This headdress is interesting because it was used by women in Ukraine since before Christianity. It was extremely popular and looked beautiful. The fabric was adorned with embroidered pagan symbols, meaningful and very old ones. Some ethnologists and scientists consider these patterns to be connected with galaxies, Solar system, or at least some kind of astronomical objects. In other words, they depict the connection of a person with the Universe.

Because of its origin, the headdress was banned by the Christian priesthood, and women weren’t allowed to wear it to the church. Ukraine (and Kyivan Rus’ before that) used to be a pagan country before it turned into a deeply Christian one in the 10th century. A lot of traditions, holidays, symbols (like embroidery patterns, etc), and beliefs originate from paganism. That’s why we often see pagan needlework patterns on old samples of clothing. Even today, there are many people in Ukraine who are paganists. But the majority is still Christian, so this religion often dictates the local social norms.

But let’s get back to the headgear we’re talking about. As women couldn’t wear it to the church, they used it for other festive special occasions and even wanted to be buried in them. Because of this tradition, almost all of the vintage kaptur headdresses ceased to be – they are simply buried with their owners and rotten in graves. Such a pity!

Such magnificent pieces should be preserved in museums instead but, sadly, only a few of them are. Today, there are only 3-5 authentic kapturs that are kept in museums and private collections. All the other samples – hundreds or even thousands of them, mind you – didn’t survive till this day. Here are a few photos of one such headwear item from Vinnytsia Regional Museum of Local History. It’s from the late 19th century. 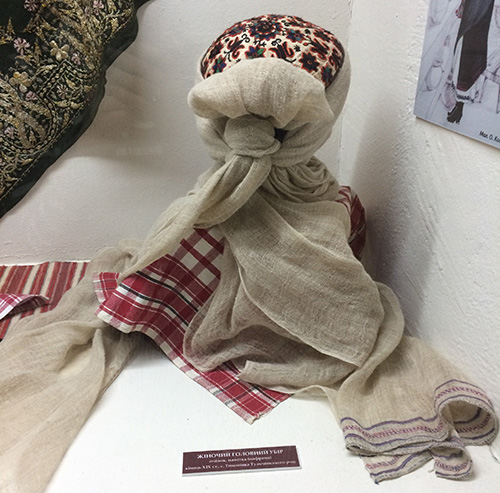 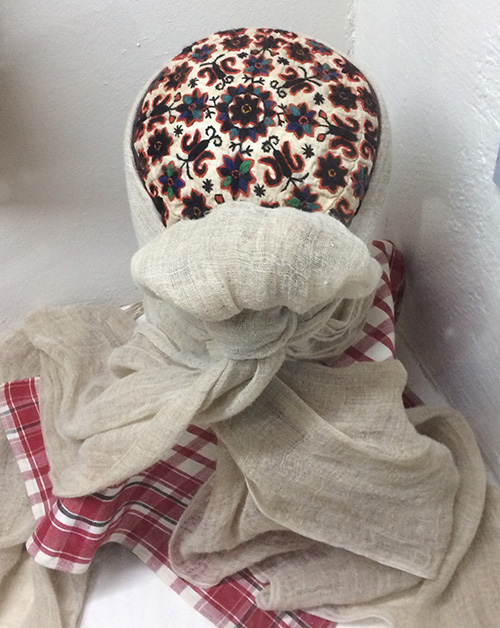 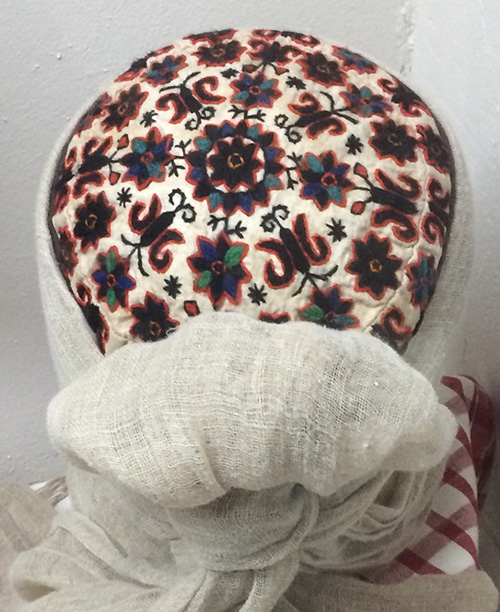