About 54 different native groups live in Vietnam. All of them have their traditional costumes which sometimes look radically different. For example, citizens of communities that live on the plateau have very colorful dresses, and plainsmen wear simple, modest outfit. This article will tell you about the general characteristics of traditional attire in Vietnam, including garments, hats, and shoes.

Vietnamese native clothing is very bright, natural and modest. Traditional attire is made of natural fabrics like cotton, silk, and hemp. It is woven, often hand-woven. Such fabric is very good for a tropical Vietnamese climate. It helps to cope with heat and humidity.

Color is also very important for Vietnamese people. Traditionally men used to wear clothes of exact color according to the status. For example, yellow color was for kings; brown and black – for civilian men; red – for high grade mandarins; green and blue – for lower grade mandarins. Today such color gradation is not actual for men any more. Every person may wear outfits of any color.

Traditionally men wear brown garment (something like a men's tunic or pajama), turban or conical hat, and wooden shoes or sandals. Formal dress consists of a white and black combination.

The early traditional men's costume in Vietnam wasn't very bright. It consisted of white trousers, a brown top, a scarf and shoes (sandals or wooden clogs). The official clothing consisted of long velvet or cotton dress and a turban. Official costume often was black&white. 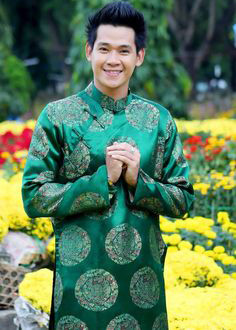 Nowadays one of the traditional men's costumes in Vietnam is Ao Dai. But it differs from women's ao dai. It is much shorter and fuller. It doesn't fit tightly. And it is worn with trousers.

As a headdress turban and conical hat are used. Simple sandals – as shoes.

Traditional women's costume includes a tunic (or several tunics), trousers, a conical hat and shoes. Formal women's dress includes 3 tunics: one of black or light brown, one of light yellow, and on the inside, a rose tunic.

Traditional women's garment is called Ao Dai. It is a kind of tunic that is tight-fitted and shows every curve of a body. Almost every woman in the streets of Vietnam is wearing ao dai. This clothing makes a woman look very slim, graceful and beautiful. The ao dai is worn over wide, floor-long trousers. Ao dai has splits on the sides that extend above waist height. That's why this outfit is very comfortable, it is easy to walk and do some work in it.

Ao dai is made individually, because it shout fit perfectly. 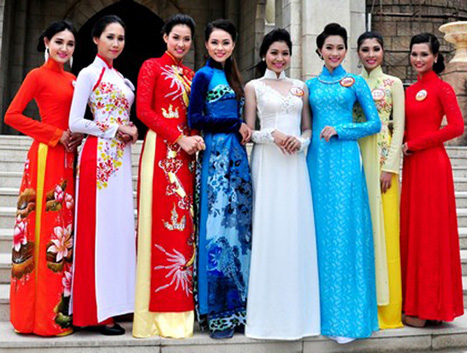 In some regions married women wear bright and colorful ao dai, unmarried girls – dresses of pastel colors, and young girls – white ao dai. It's their everyday clothes, in which they go to work or school. But in another parts of the country women wear light brown short shirts and long black skirts in everyday life.

Actually, ao dai wasn't the first national dress in Vietnam. The earliest version (since 12th century) was Ao tu than, which used to be rather popular centuries ago. Later it evolved into the early ao dai which had five flaps: one under the front lap, two in the back, and two in the front. Ao tu than wasn't so tight-fitted and had a lower collar.

People in Vietnam prefer to wear conical hats which protect them from hot sun, rain, rough wind and help them in ordinary life a lot. Both men and women use them. But the design and look of such hats vary pretty much. There are more than 50 different types of conical hats in Vietnam: made for men, women, children, Buddists, army, rich people and so on. 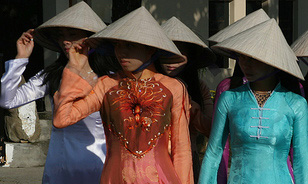 Women often use their conical hat not only as a piece of clothing. They carry fruit and vegetables in hats as well. Also they can scoop up some water from a well with a hat and drink. Vietnamese women prefer one of the designs of a conical hat, called "Poetical Leaf". Women's hats are often beautifully decorated and use ribbons or nice delicate stripes to fix the hat on the head.

Vietnamese conical hats are always handmade. Such materials as bamboo, young palm leaves and reed are used. Palm leaves and special kind of bamboo are used to knit a hat and threads are made from the leaves of a special kind of reed. It is rather hard to make everything nice and precisely.

Men and women in Vietnam traditionally wear special shoes that are popular only in Asian countries. They are wooden clogs which are called "guoc". They have a symbolic meaning for Vietnamese people. There are even different legends about the appearance of wooden clogs.

Such shoes are very convenient for Vietnamese climate and way of life. The thing is, Vietnamese people spend a lot of time on rice fields and in the water fishing. So, they needed shoes that can handle the usage in wet places for long time. No cloth could be used, and there were no synthetic materials yet. At first men and women in Vietnam walked barefoot. Then clogs were invented. But for a long time after this invention people didn't use clogs widely. Those who had such shoes used them only for holidays, not in everyday life. Even in 15th century clogs weren't too popular among ordinary Vietnamese.

Usually clogs are carved from wood (the sole) or made from ivory twigs, bamboo roots, coconut shells etc. A lot of natural materials can be used. Men's and women's clogs are different. Women's ones are shaped like hour-glasses, men's clogs have a straight sole. Modern clogs are much more convenient. They are usually made of plastic and rubber. But traditional clogs are still used on festivals and ceremonies to honor the past.

what this article show is the 20th century westernized Áo Dài, and I would not call it that much traditional. I recommenced anyone who have interested google the term "Áo Tấc" "Áo Ngũ Thân" "Áo Nhật Bình" those a much older and more original version of Vietnam traditional clothes, dated back to at least Nguyễn Dynasty of Vietnam.

Thanks for the hint.
Here is a new article about Ao Ngu Than and Ao Tu Than: http://nationalclothing.org/asia/22-vietnam/392-vietnamese-national-dress-ao-dai-during-2,000-years-of-its-history-what-is-ao-ngu-than-and-ao-tu-than.html.
For those, who are interested in older versions of ao dai.
Quote
#2 Chickknight Greenleaf 2018-11-18 17:27
what this article show is the 20th century westernized Áo Dài, and I would not call it that much traditional. I recommenced anyone who have interested google the term "Áo Tấc" "Áo Ngũ Thân" "Áo Nhật Bình" those a much older and more original version of Vietnam traditional clothes, dated back to at least Nguyễn Dynasty of Vietnam.
Quote
#1 erick 2016-01-28 13:57
people in vietnam wear plentty of clothes
Quote
Refresh comments list