Longyi wrap-around cloth from Myanmar. Who wears it and what does it look like?

Traditional clothing of many Southeast Asian countries includes wrap-around skirts instead of pants and shorts. The climate here is very hot and humid, so extra airing is comfy for the body and people often use loose clothes. In Myanmar (Burma), both men and women wear a wrap-around cloth around their lower body called “longyi” (lon chee). There are various ways of draping it and, sometimes, longyi is sewn into a tube for convenience.

A longyi usually is a simple piece of cotton or silk (other fabrics can also be used) cloth 2 m (6.6 ft) long and 80 cm (2.6 ft) wide. It is wrapped around the waist and reaches the ankles. Although when needed, a longyi can be folded up to the knees so that it didn’t restrict movements.

This wrap-around garment is a comparatively modern item. It became widespread in Myanmar during British colonial rule. Before that, Burmese people wore a much wider unsewn pasoww or open at the front to reveal the calves htamein. But similar wrap-around skirt-like garments have been popular in this corner of the world for centuries. Even today, Burmese male longyi can be called “pasoww” and female “htamein”.

While the longyi is worn by both men and women in Myanmar, the cut and design aren’t the same. The men’s longyi or pasoww is draped so that there are 2 folds in the front, one at either hip, tucked at the waist. The women’s longyi or htamein has a single broad fold in the front. The length of a longyi can be different but never above the knees, for both sexes. 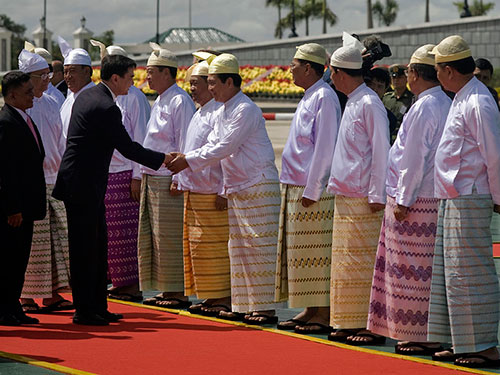 Burmese State Peace and Development Council members greet Thai Prime Minister in acheik-patterned longyi. Actually, such garments are typically worn by women. The photo is from Wikipedia.org and was provided by Thai Government

Traditionally, wrap-around cloths are bought unsewn, and each person drapes it as he or she chooses and feels fit. But modern longyis can be often found sewn into a tube so that it was easier to use them. It’s interesting that in Myanmar, it’s totally common to see people re-tying their longyi in public. Ladies do it more discreetly, but still.

If to talk about the colors and patterns for longyi, men prefer single color fabric and striped and checkered patterns. Women wear multicolored longyi, often with floral and other prints. Wealthy families, brides and grooms, and celebs dress in ornate longyi adorned with gold or silver embroidery, encrusted with pearls and gems, etc. 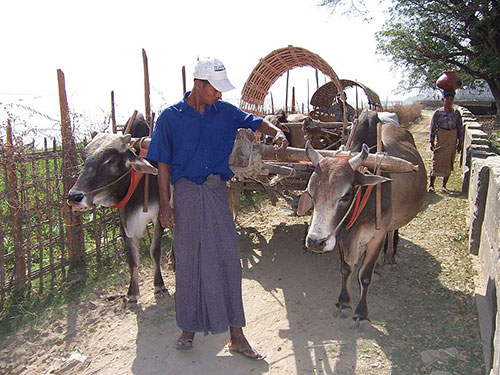 Having a long rectangular unsewn piece of fabric with you at any given time is handy. You can use it for many purposes. So, Burmese people love their longyi. They use it as a cushion for carrying heavy things, as a buoy in the river, to carry goods, etc. This item is convenient when you need to change or bath, and it’s easily washed and ironed. Great article of clothes and perfect for the local climate and weather conditions.