The folk dress of Tatarstan is outstanding – ornate, multilayered, and richly adorned with jewelry, embroidery, and other decorations. But unfortunately, the traditional Tatar clothing is long since out of fashion. In the mid-19th century, Tatars mostly wore folk garments for any occasion (everyday attire, festive clothes, indoor and outdoor garments, winter wear, etc.), but today, you can see these costumes only during some folk festivals, historical reenactments, in museums, and worn by very few people in real life. Though, Tatar national costumes deserve to be well-known and preserved.

The history of Tatar ethnos is very complicated. There are several different groups of Tatars scattered around Asia and Europe. Sometimes, they barely have any cultural connections between them, so even the folk dress can differ a lot. Generally, each region of residence has its own typical features of the traditional attire, especially if to talk about female clothing. That’s because women usually lived a more withdrawn from society life, had fewer contacts with the outside world, and, according to the Tatar authentic lifestyle, are the keepers of tradition.

But still, there are some typical features that can be found in any Tatar outfit, no matter the region. 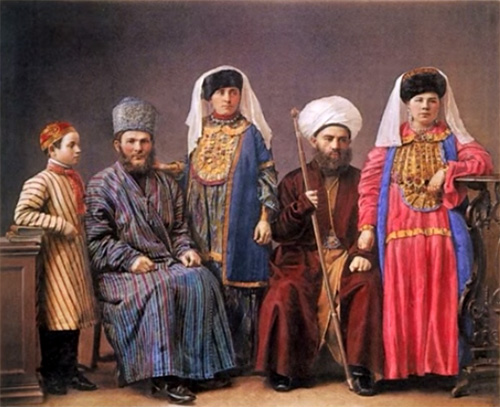 Both male and female Tatar outfits are multilayered, long, and cover most of the body. Modesty and richness of ornamentation are very typical for this nation. Traditionally, men and women wear long tunic-like shirts, trousers, some kind of outerwear, and obligatory headdresses. Women like their authentic jewelry pieces and use a lot of them with the festive attire. And by the way, Tatar jewels are massive and intricately decorated. 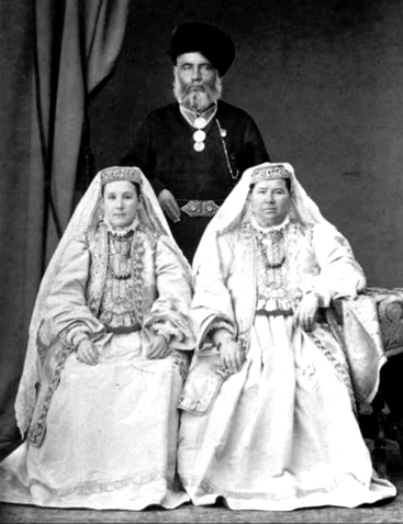 Tatar tunic-like shirt is called “kulmek”. It is unisex. The cut of this shirt is peculiar – it is made from a long piece of cloth, without shoulder seams but with wide inserts at the sides. The shirt traditionally is wide and worn without a belt. The popular collar is a stand-up, while the straight collar is often reserved for the groom’s shirt. It is usually sewn from natural and light fabrics, like cotton or linen. White shirts are adorned with embroidery. 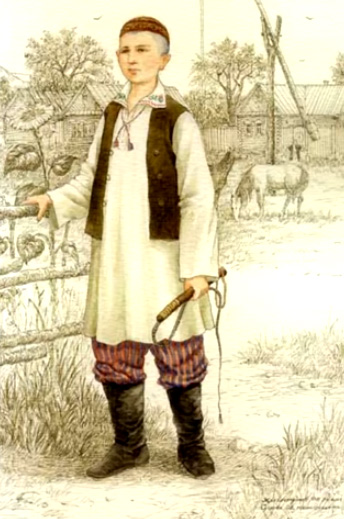 In the late 19th century, Tatar men and women start to wear shirts of more contemporary design, made from factory-produced fabric, with a straight collar, and without side inserts. Also, very popular became the frills, especially for women’s shirts, which sometimes had several rows of frills at the hem. 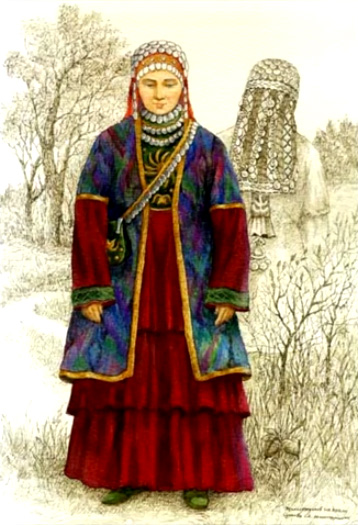 The trousers are called “yshtan”. They are usually loose and hidden or almost hidden under the tunic.

Another part of Tatar folk costume is the apron, but it came in use only in the late 19th – early 20th century. They were used by women with a shirt, young girls in some areas wore them with outerwear as well, and even men used apron but as a part of workwear. The female aprons were beautifully embellished with embroidery or woven patterns. 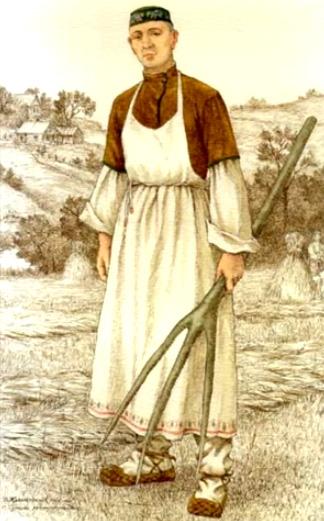 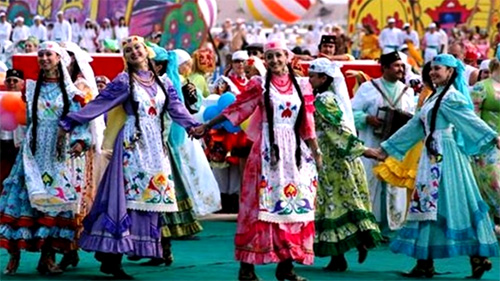 Tatar men, being Muslims, wear a round skull-cap called “tubeteika”. Over the tubeteika, Tatar males could wear fabric and woolen hats, ceremonial headdresses, and winter headgear. Young men and women prefer bright and decorative skull-caps, while older people choose less embellished and plainer ones. Women use various veils or skull-caps + veils. In winter, both males and females wear a fur hat or fur-trimmed hat over their skull-caps and veils. 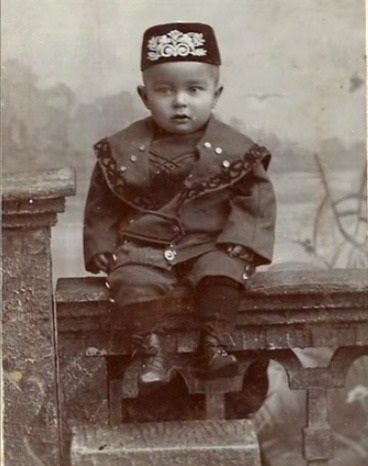 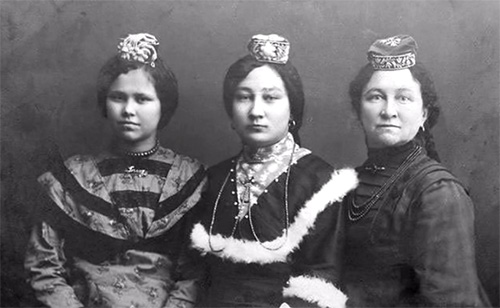 But women’s headdresses in Tatarstan are more complicated than men’s. For instance, young girls can wear a tubeteika or kalfak (specific headwear shaped similar to a beanie hat and decorated with plenty of embroidery, beading, pearls, gems, and coins) and leave the braids visible or covered with a special adornment. The kalfak is one of the female symbols of Tatarstan because it was very popular and still is the famous folk headdress. It is rather ornate and beautiful. Older Tatar women often wear skull-caps and kalfaks with veils over them to cover their hair, neck, and shoulders. 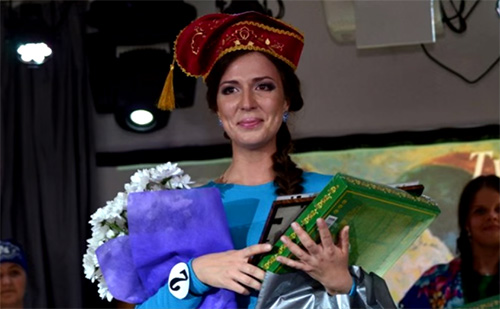 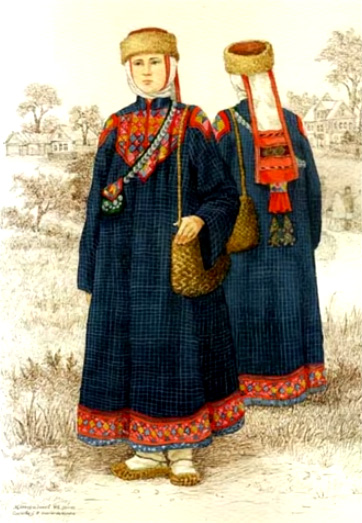 Other interesting Tatar headdresses are female hats adorned with gold and silver coins. They were popular in the 17th – mid-19th century. Some of them were soft, with lots of coins sewn to the fabric. Others had a hard frame covered with silk, were shaped like a high cone, and embellished with coins, pearls, coral beads, and a gold peak. 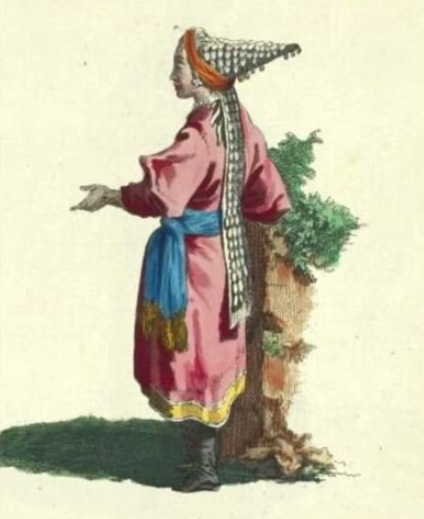 There are dozens of more folk headpieces used by Tatar women that differ in size, shape, material, region, ornamentation, etc. 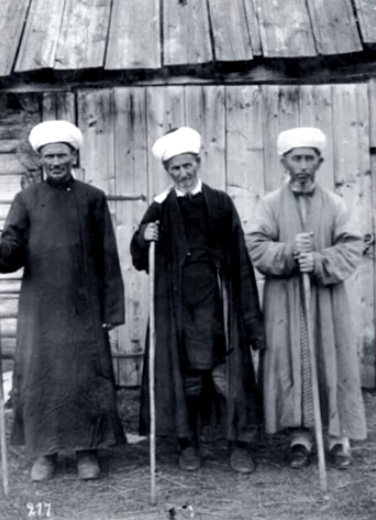 If to talk about shoes, people traditionally use leather shoes and boots with a soft or hard sole. In the past and in rural areas, Tatars also wore bast shoes with woolen leggings or hand-knit white high socks. Usually, leather shoes were used by wealthy people. Male shoes are less decorated, while female footwear often is extremely ornate and beautiful. Some festive women’s shoes were also traditionally made from velvet and richly embroidered with gold and silver threads, beads, pearls, etc. 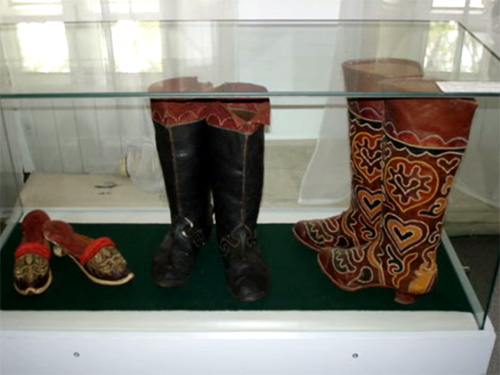 Tatar women have a very pretty footwear piece called “ichigi”. They are sort of inner shoes, delicate and richly decorated. When she goes outside, she puts a pair of coarser shoes or rubber shoes on top of ichigi. But some ichigi have a hard sole and a heel and are self-sufficient.

Tatars love jewelry and use a lot of it. Of course, men wear a few pieces, while women have a large assortment of jewels. The male jewelry pieces are, mostly, finger rings and belt buckles. Among the most popular female jewelry are hair jewelry (of various shapes, sizes, cost, and quality), large chest adornments (often, made from fabric and gold or silver coins), bracelets, finger rings, earrings, nose rings, etc. 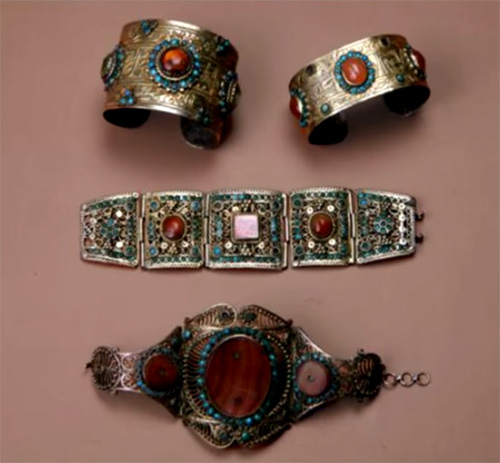 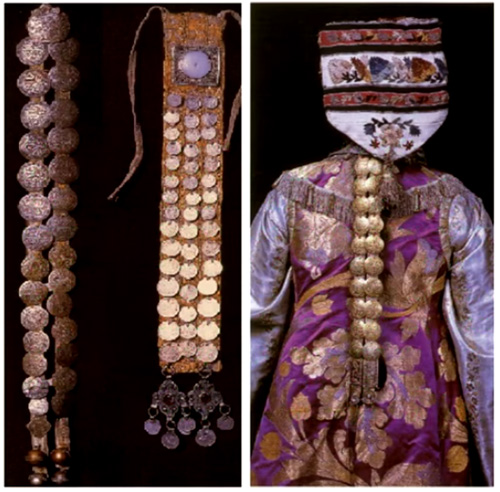 Tatar chest adornments look amazing. They are like small aprons worn around the neck, and the fabric is decorated with coins, gold and silver plaits, embroidery, applique, coral beads, pearls, pendants, and different other items. 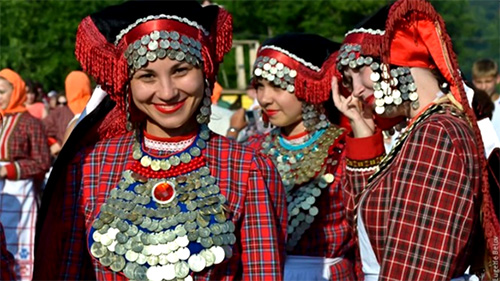