A gorgeous sheepskin hat called “telpek” is very popular in Turkmenistan even today. It is a folk accessory worn by men with their traditional apparel and a symbol of masculinity and pride. Turkmen males wear a telpek not only for warmth but also to honor the tradition. This shaggy, warm, and surprisingly light headdress is a highly valued and cared about accessory. Actually, few folk accessories around the planet have the same level of respect. What else do we know about Turkmen telpek hats?

A large and opulent round sheepskin hat is a traditional male headdress in Turkmenistan. And also, in Georgia, Azerbaijan, Armenia, Dagestan, and some other Caucasian countries. Although in some areas, the hat is called “telpek”, and in others – “papakha”. The headdress is made from natural sheepskin, with fur sticking outside. This headpiece is, surprisingly, a lot lighter than it looks. At the same time, it provides warmth to the wearer.

The sheepskin for a telpek is practically never dyed, so these hats are typically off-white or black – the normal color of sheep wool.

Since telpeks are soft and rather flexible hats, without any rigid frames, people often use special mulberry wood dummies to store them when the hats are taken off. This is how the shape of a telpek is preserved. It says a lot about the status of this piece of clothing, doesn’t it?

A telpek in Turkmenistan is worn over a small skull-cap called “takhya” to keep the headdress in place and to protect the telpek from all the grease and oils from the hair. Obviously, you can’t wash your telpek too frequently. 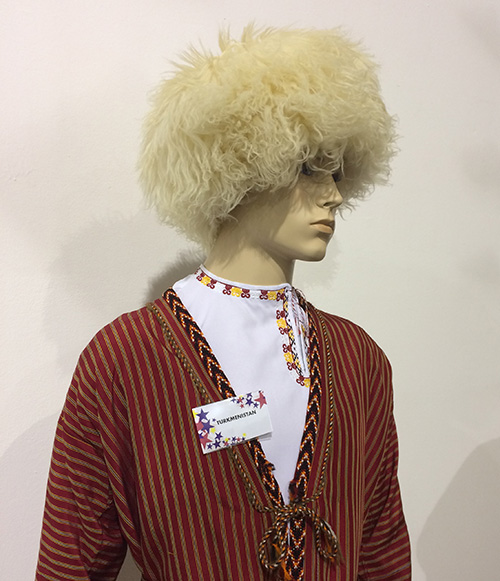 A Turkmen telpek can be of different height – wealthier men with higher status could wore telpeks 50 cm high. Today, telpeks range as well – higher and shaggier hats are more expensive and higher estimated. But you can find a wide assortment of telpeks to satisfy any demand.

At some point, a telpek hat was a part of the military uniform. The hats had a quilted lining that protected the head from sword strikes.

Traditionally, Turkmen telpeks were produced by elderly men. Such artisans were very respectable people. These days, different men are involved in this craft. And they sell their products both to Turkmen men and to tourists.

Turkmen males value their telpeks highly. It is a cultural heritage piece, a symbol of ethnic affiliation, and even a criterion of men’s beauty. There is a saying in Turkmenistan, “A hat is worn not for warmth but for honor. If you have no one to talk to – talk to your papakha”.