Morocco is a country with very rich traditions, a great ethnic diversity, and incredible views. But the clothing traditions of Morocco are even more diverse and colorful. While the traditional male clothing is rather simple and has little embellishments, the female garments are ornate, exquisite, and expensive. The folk dress of Morocco is traditionally made from the natural materials. The most interesting fact about the clothing traditions of Moroccans? A lot of women in this country wear hijab just because of the fashion.

This country is populated with many different ethnic communities, and each of them has its own unique features. That’s why you can see a lot of various traditional costumes on the streets of Morocco. But the most widespread garment in Morocco is called “djellaba”. It is a long and loose hooded robe used by both men and women. Though, men’s djellaba is plainer, the color of the fabric is neutral, while women’s djellaba can be colorful and ornate (with embroidery, beadwork, etc). The hood of a djellaba is called “qob”. It protects the wearer from the sun, sand, rain, and even snow in mountain regions. Summer djellabas are made from cotton and winter ones – from wool. Natural fabrics help people to adjust to the vagaries of weather and climate. 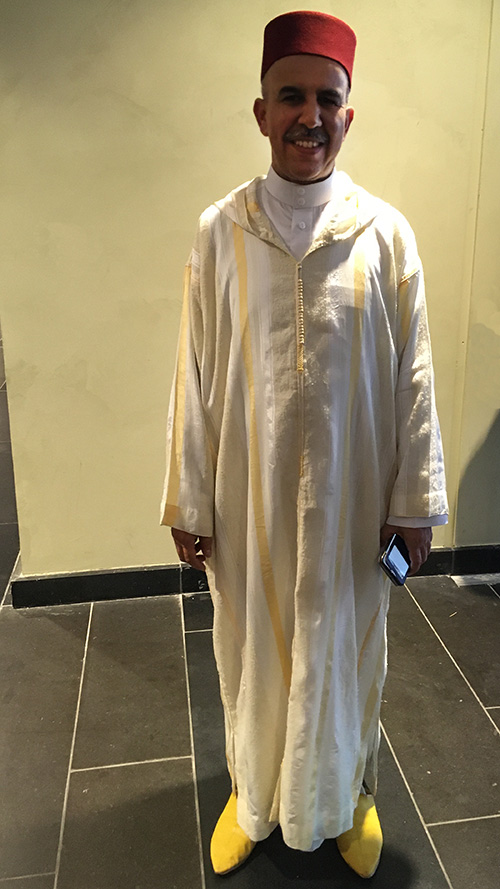 Another traditional garment used in Morocco is a kaftan. It is made for both sexes but women use it more often. Kaftan is a kind of djellaba but without the hood and collar. The same fabrics and embellishments are used to make these two garments. Kaftan has a very long and glorious history. It was used by Ottoman people, Persians, and Asians (Russia, Kazakhstan, Uzbekistan, etc). But kaftans from Morocco are among the most unrivaled in the world, especially wedding kaftans.

Another variant of a robe used by both men and women is called “gandora”. It is similar to the djellaba and kaftan, but it has short sleeves and no hood. Gandora can be plain and simple or embellished and beautiful. 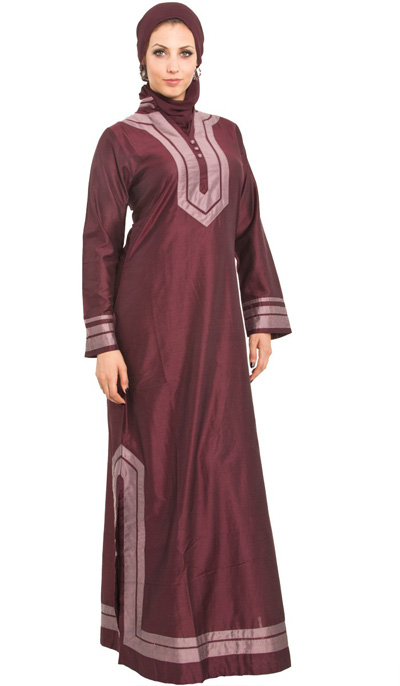 Moroccan woman in a formal kaftan and hijab. Photo from Artizara.com

Moroccan young girl dressed for the wedding, Fez, Morocco, 1984. Her traditional bridal attire is adorned with plenty of gold, embroidery, precious stones, beads, and other decorations. Photo from Teenagefilm.com

The traditional headdress of Moroccan men is called “tarboosh”. It is similar to the Ottoman fez. Of course, there are some differences according to the region of usage. But they look alike. Tarboosh is a tight-fitting round skull cap often made from red felt, with a tassel attached to the top.

Locals wear leather slippers without heels. They are called “balgha”. Men use them more eagerly than women. Balgha are usually yellow but they can also be black, white or of another color.

Moroccan women use plenty of jewelry. Usually, the pieces are massive, with complicated patterns and large precious stones. Festive clothing is also adorned with gems, gold and silver threads or decorations, pearls, etc. And festive headdresses for special occasions are real works of art. But nothing can be compared to the bridal outfits. The finest fabrics are embellished with gold and silver embroidery, pearls and gems are sewn into the pattern, every piece of the costume is adorned with jewels (even shoes, belts, or cloaks), jewelry is made from solid gold with huge gems, necklaces cover the whole torso (sometimes to the waist), striking headgears with as much gold and precious stones as you can imagine. Moroccan females definitely appreciate jewelry.