This headscarf worn by Berber tribes of Morocco and other countries is both a functional and ceremonial headwear. It helps protect the face from the desert sand and some Berber men wear it to hide their nose and mouth from strangers. If they don’t have a tagelmust at the moment, they often cover the lower face with bare hands to hide it – that’s how important this turban is. What else do we know about a Berber tagelmust or cheche?

This turban has several names – tagelmust, cheche, cheich, litham. Originally, it was always blue, indigo-dyed, although today, other colors are also used. Still, different shades of blue are still the most common for this headdress. The depth of blue in the past indicted the wearer’s wealth – the more of indigo pigment you could afford to use, the better your financial status.

Another interesting thing about indigo dyeing a tagelmust is that, while usually the fabric is soaked and boiled in water with this blue dye, desert people can’t afford to use so much water for dyeing, so they often pounded dried indigo into the canvas. And when you wear a cheche permanently, sweating in it, breathing through it, and getting under the rain in it, part of the dye gets into your skin and makes your face blue’ish. Tuaregs are even called the “blue men of the desert” because of their face color. It’s good that indigo dye is a natural and rather harmless pigment, so this blue skin isn’t really that dangerous for their health.

A tagelmust is a male accessory. It’s a turban but it also covers the face and neck. Often, men protect their nose and mouth with a cheche from the sand blown by the desert winds. And, of course, the many layers of fabric help to cope with the hot desert sun. 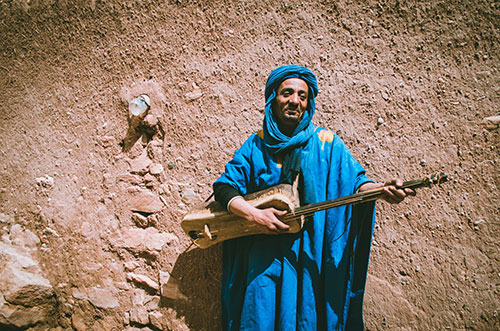 Basically, a tagelmust is a very long rectangular piece of cotton cloth wound around the head and neck. The length of it may reach 10 m (33 feet). It is arranged so that multiple layers of fabric cover the skin. Usually, only the eyes and bridge of the nose are visible from under the turban, not even the eyebrows. But there are various ways of draping the headdress, each man picks the ones he’s most comfortable with and that are traditional for his clan.

The tagelmust originates from the Berber culture. It is especially widespread among the Tuareg Berber people, but other Moroccans use it as well. In Tuareg tribes, men who wear a tagelmust are called “Kel Tagelmust” or “People of the Veil” – that sounds so lovely!

In the Berber culture, covering the man’s nose and mouth from strangers or people of higher status is an important custom. Men usually take off their tagelmusts only with the closest family around. Otherwise, they use this turban/veil to hide their faces. In case when a Tuareg male doesn’t have a tagelmust at hand, he uses his bare hands to cover the lower part of the face, because it’s considered a shame to show your nose and mouth to just anybody.