What significant clothing trends were there in the 15th century? Decorative sleeves, first codpieces, and shockingly short male tunics

15Th-century fashion was beautiful and very decorative. A number of curious clothing trends characterize this period and make it unique. Like insanely expensive or rather inconvenient sleeves on both male and female clothes, festoon edges on outer garments and headdresses, first one-piece men’s hose, and other exciting features we find in 15th-century outfits. This particular period is favored by many historical reenactors, so we’ve gathered several typical fashion trends that will help you better understand the clothing traditions and features of this era.

Wealthy ladies in the 15th century often wore dresses with very ornate and insanely expensive sleeves sewn from silk velvet fabric and embroidered with gold thread. Why was it a trend to make sleeves of another fabric than the rest of the dress? Because such a lush textile was very, very costly and people simply couldn’t afford to sew a whole floor-length gown from it. So, they bought only comparatively small pieces of gold-embroidered silk velvet cloth, just enough for sleeves. The dress looked a lot more beautiful and ornate but cost less – a great budget-saving tip of the 1400s. And usually, these sleeves were narrow, no excessive fabric. 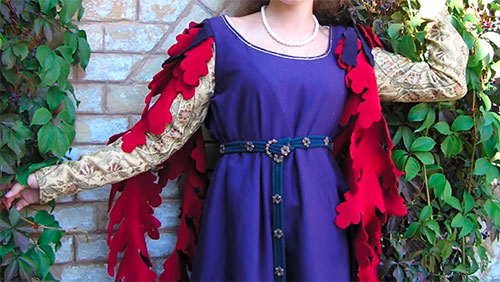 Sleeves and edges decorated with festoons

Another popular trend for sleeves and edges of other garments were festoons. This was for the outerwear’s sleeves, edges of a hood, etc. Tailors cut large and intricate festoons on the border to decorate the attire even more. The two mentioned trends were often combined – the sleeves of the underdress were made from silk velvet fabric and the sleeves of the woolen long dress had elaborate festoons. But male garments also had fastoons, even military outerwear. For example, there were men’s houppelandes, tabards, chaperons adorned with festoons in the 15th century.

This historical period, in general, is characterized by a wide variety of decorative sleeves. They were so diverse, it amazes. Full circle sleeves, hanging sleeves, sleeves with festoons, wide sleeves with narrow cuffs, sleeves slit to the elbow and tied together so that the chemise underneath was visible, fur-trimmed sleeves, narrow fitting sleeves, and many other variations. The styles replaced each other or existed simultaneously.

In the 15th century, male hose or chausses – the old equivalent of modern pants (although, it resembled stockings more than trousers) – evolved from two separate pantlegs to one-piece pants. And they already had a flap that covered men’s genitalia. Later, in the 16th century, this flap will turn into a large and pronounced codpiece, but for now, it was just a flap made from the same fabric as the hose and without any elaborate shaping or decorations.

Men in the 14th-15th century used rather large but flat leather wallets attached to the belt at the hip. The shape was flat to stay out of the way when the man moved or worked with his hands. But the size made these wallets or purses roomy. The accessory was typically fastened with a leather strap and a buckle. It was a handy and cute-looking bag. 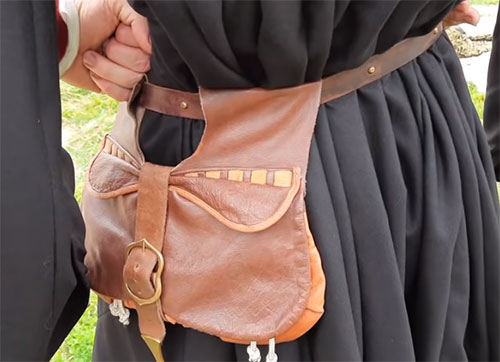 Fun fact! This fashion trend was caused by the plague pandemic in Europe that killed half its population. Those people who survived decided that they can wear whatever they liked. And long and modest male clothes were replaced by very short and tight-fitting tunics. These garments don’t seem so shocking until the man bends down and suddenly everybody can see his underwear – at the time, the hose were still two separate pieces worn over braies. Even for a modern eye, such tunics might seem not very complimenting – like big-shouldered bearded men dressed in mini dresses and tights. Obviously, a lot of people in the 15th century considered this fashion trend inappropriate and ill-mannered. But those men realized that they need to take everything from life until they can. So, this trend existed for some time. 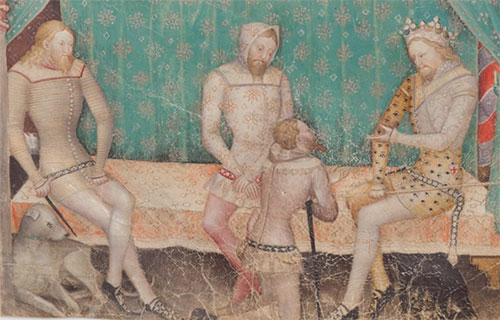 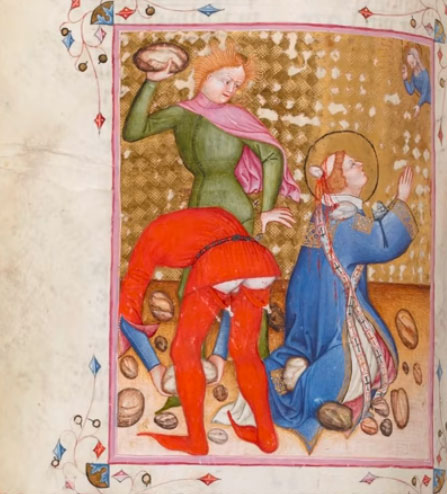