In this article, we’ll tell you a bit about the most curious fashion trends throughout the 1400s, especially in gentlemen’s apparel. Where did these trends come from? What events caused them? And how did 15th-century people achieve a fashionable look? We’ll also talk about several interesting (for some of you, they might even look shocking) male garments popular in the 15th century. For instance, high and tight-fitting male stockings.

The article is based on the video by Natalya Skornyakova: https://www.youtube.com/watch?v=C11yhc4V4Nw

At the beginning of the 15th century, one fashion trend was particularly widespread in Europe. And it was pleats on clothes. Wealthier men and women used rather wide garments, belted at the waist or above the waist so that they got many pleats on their outfits. Pleats are a very simple and easily achieved trimming, unlike embroidery, applique, beading, etc. But note that the fabric was expensive, and large amounts of fabric made your attire considerably costlier. So, poor people couldn’t afford to have multiple pleats because they used as little fabric as they could. Wealthy Europeans in the 15th century didn’t have a problem with paying extra for the fabric if it could help them show off their status and wealth. 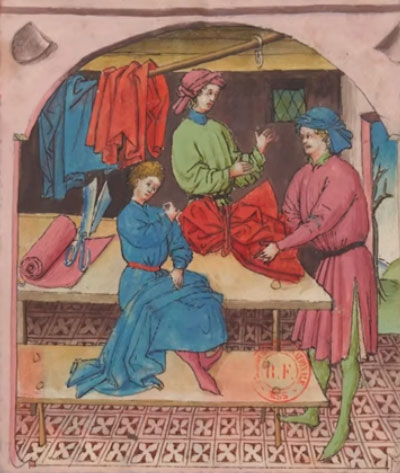 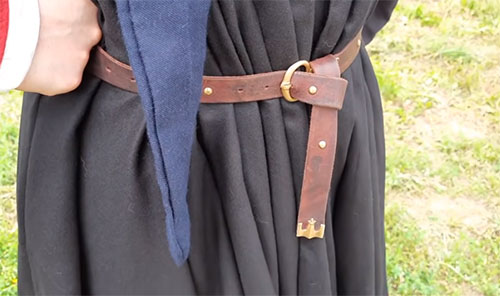 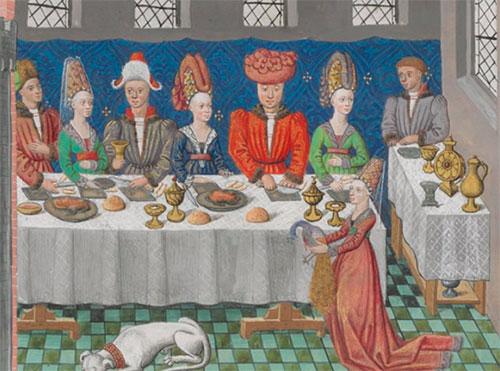 Both men and women wore wide garments (dresses, houppelandes, etc) made from fine thin wool and belted with thin leather belts. Although people had one significant problem at the time – they didn’t have wide enough pieces of fabric. All the fabric was hand-woven, and the weaving looms were limited in width, so there was no way of getting a piece of cloth over 1m wide. Thereby, to make a garment with plenty of fashionable pleats people had to sew clothing from several pieces of fabric. Even the royal houppelandes were made from dozens of pieces.

Another popular trend that appeared in the 14th century and stayed firmly in place in Europe in the 15th century is the hanging sleeves on the main garments. They were used by men and women alike. Again, mostly wealthy and middle-class ladies and gentlemen. Peasants didn’t wear clothes with long hanging sleeves simply because they didn’t allow people to work, do their everyday chores. 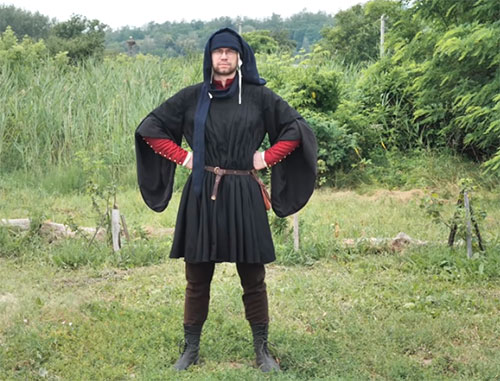 The hanging sleeves had a visible inside part, so people often used fine silk lining. For example, black silk lining, which leads us to our next trend.

For a very long time, it was practically impossible to dye the fabric in deep black because there were no effective black natural dyes. You could achieve gray, very dark brown, very dark blue, etc, but not deep black. And also, people didn’t really have a demand for deep black dyes, so they didn’t put much of an effort to create them. But in the 15th century, such a demand arose. Why?

Many of you have heard about different laws that forbid certain people to use certain colors in clothing. For example, a color could be a prerogative of a certain class, and those of lower status weren’t allowed to use it. Colors have always been symbolic and meaningful for humanity. In the 15th century, there was a similar law that allowed only noble men and women to wear expensive red and blue clothes. Also, peasants didn’t use bright colors. So, poorer citizens needed some other dark dyes for their outfits. Why not black? It’s practical and not bright.

People quickly found methods to dye the fabric in deep black. And the uniqueness of such clothing attracted not only poorer classes but middle and upper classes as well. Very soon, noblemen started to incorporate black accessories and garments into their apparel. The first noble lovers of black appeared in Italy and then, this trend spread across whole Europe. Even some royals wore black clothes.

One of the popular medieval headpieces was a chaperon (read more about it here: Medieval chaperon or hood. Interesting facts, modifications, and designs). It was a cute headdress made from wool, so people couldn’t wash it often. So, men started to wear a cap underneath the headpiece. It was called a “cale” and it was tied under the chin. This linen or cotton item protected the headdress from grease and sweat, so men loved it. Male cales were in use for almost 400 years, which says a lot about their convenience. At home, men could even wear only a cale, without the chaperon. And the finest cales were made from very thin, almost transparent linen or decorated with embroidery. As you understand, men weren’t ashamed of this not very manly accessory and happily used it.

Throughout the Middle Ages, gentlemen wore high stockings instead of pants. Unlike female stockings that were knee-high, male stockings, called “chausses” in France, were much higher. A bit later, people even started to sew the two chausses legs together to create tight-fitting trousers. The chausses were woolen and the fabric was cut so that it was a little stretchy, which allowed for them to be so tight-fitting. 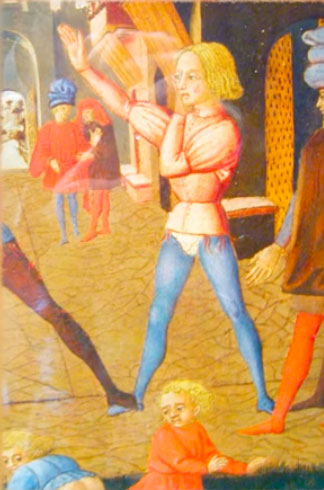