Emirati men and women still keep their traditions in the 21st century. They wear the national outfits of the United Arab Emirates every day due to the tradition, religious law, and climate of the country. When Emiratis go abroad they usually prefer to wear the western-style clothing but at home, most of them continue to use kanduras, gutrahs, and abayas. The clothing tradition is very important in the UAE, so tourists should remember about that and respect it, even if we’re not used to wearing such clothes.

Men in the United Arab Emirates wear long robes made from light-colored fabric. These robes are called “kandura”, “gandurah”, or “tawb”. Kandura is not just an outfit. It also shows the status of a person – the longer the kandura, the higher the status. An average man in the UAE has up to 50 kanduras so he could change them often enough to look neat and tidy. 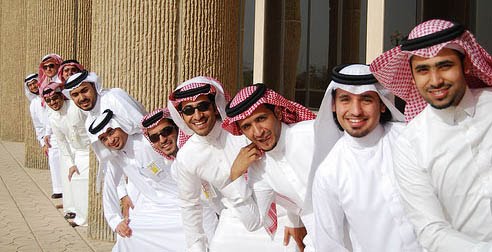 Emirati men in the traditional outfits. Photo from Prezi.com

The male headdress is an obligatory piece of Emirati national costume. It is called “gutrah” or “keffiyeh”. It is a square headscarf, usually made from cotton. The color of the fabric can be white, red&white, black&white, or many other variations. There are different ways of draping the gutrah. But two of them are the most common. The headscarf can be held in place by an ornate headband called “agal” (a special black cord). Another technique of wearing the gutrah is to wrap the corners of the scarf around the head and tie to keep the whole thing in place. For the latter method, you don’t need aghals. Men use gutrahs because of the climate of the UAE – not many people can withstand such a hot sun without sunburns and heatstroke. So, locals are used to covering their heads.

The traditional footwear in the United Arab Emirates is sandals. Most citizens use them in day-to-day life, with any clothing style, not only the traditional dress. Such shoes are designed to fit and be comfy in the hot and dry climate. Sandals protect the feet from sweating and overheating.

Emirati women are very conservative in their choice of costume. The majority of females cover their face and body. The most popular pieces of clothes are abaya, hijab, niqab, burqa, and similar items (by the way, you can learn more about the traditional headdresses of Muslim women here). Though, under the veils and cloaks, Emirati females often wear designer clothing and very fashionable attires. Even if they can show it only to their family and close friends. 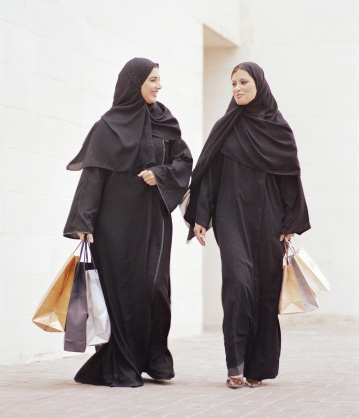 Emirati women in the street wearing abayas. Photo from Khalifaalneyadi.blogspot.com

The abaya is a piece that can be seen everywhere in the streets. It is a long black cloak that covers the whole body of a woman. It leaves only a face, hands, and feet visible. Traditionally, the abaya is always black and loose but nowadays some Emirati young women use fitted abayas decorated with colorful embroidery on the sleeves and around the collar.

Older females in the UAE often wear burqas (intricate masks that cover eyebrows, nose, and upper lip). Don’t confuse it with the burqa used by Afghan women – large cloaks that hide the head and body and have a grille for the eyes to see through. Emirati burqa is not a mandatory piece but it definitely brings some respect to the wearers from locals. This piece of garment shows the marital status of a female – only married women use it. Historically, wearing a burqa is one of the oldest traditions in the UAE, though there is very little info about the origin of this item. Youth use burqas very seldom. But they usually cover their heads and faces with less orthodox headdresses: hijab (a headscarf), niqab (a headdress that covers the face and has an opening for the eyes), gishwa (a thin veil that covers the face but allows the woman to see through it), etc. 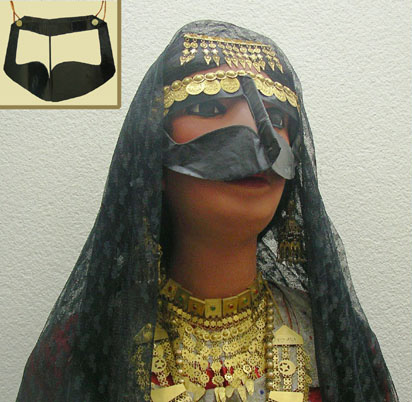 Traditional burqa mask used in the UAE. This leather (or sometimes metal) mask covers the eyebrows, nose and upper lip of a woman. It leaves eyes and cheeks visible. This is a photo of a burqa from the museum in UAE. Photo from Kookynet.net

The footwear of Emirati females is also sandals. Such shoes are ideal for the climate of the country.