The clothing in Quattrocento and Cinquecento periods differed from each other much, but also, it had a lot of similar features. The traditional garments worn in Europe in the 1400s-1500s made a great influence on world fashion and even on modern fashion trends and ideas. Modern fashion designers today sometimes use terms like “Quattrocento palette” or “Quattrocento hairstyle”. Have you ever wondered what that means? Let’s find out together.

Let's do an anatomy of costume in the Quattrocento. It looks something like this and was basically confined to the Italian city-states.

Here is an image that will give you an idea of the kind of silhouette we're looking at. 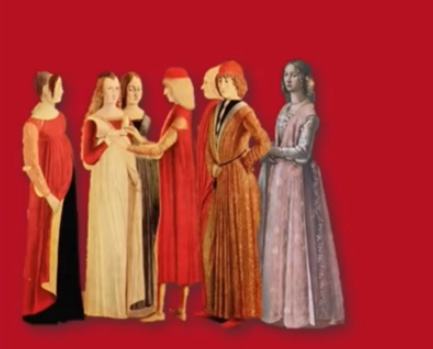 So, let’s take a closer look at the traditional clothes of this period. It started off with a camicia. The camicia was a simple long-sleeved linen smock dress. 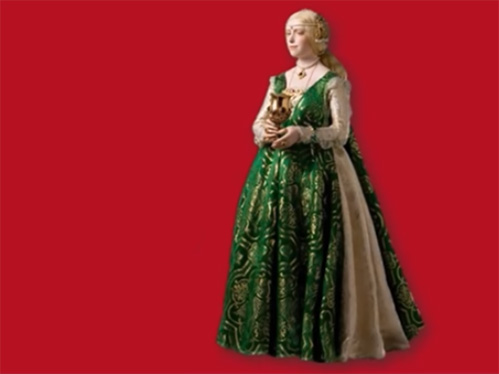 Over that, went the gamurra. This was a high-waisted dress, often with detachable sleeves.

Over the gamurra, went giornea. It was a dress that was split on the side and belted just below the bosom. This garment reveals the dress beneath.

The sleeves are interesting. They are often divided into two: the upper sleeve and the foresleeve. And then, they are tied at the middle. It's a very interesting silhouette.

As the Quattrocento progressed, the skirts got a little fuller, everything got a tiny bit fuller. 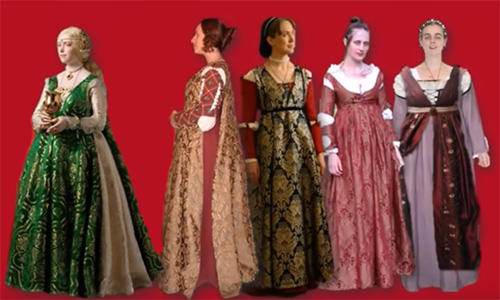 Let's look at the male costume. They wore a doublet, often padded with a leg-of-mutton sleeve, hose, sometimes mi-parti (when each hose leg was dyed a different color), a codpiece or a braguette, and a giornea, often quilted or padded.

The male giornea works exactly the same way as the female giornea – you just fold it over and there it is. But male giornea were often quilted with organ-pipe folds (very popular fashion trend of the period) and belted at the waist. So the attire formed a very slender silhouette, and very colorful. It's also rather feminine. 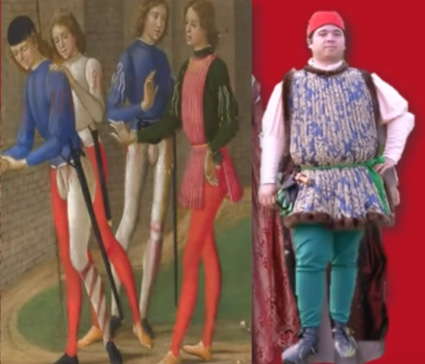 Over all of this, came cioppa. This was a cape, basically. And again, it was often padded and split. But note that the lining was a different color.

This often happened in the Quattrocento – the linings being different colors due to the main fabric of the garment. This trick was used to give dynamism, to give color to the outfit. Another feature of the period is that a lot of clothing in the Quattrocento was trimmed in black.

But what were people wearing on their feet? Well, men were wearing little booties, but ladies were wearing high heels. These are called “chopines” and they're basically platform heel wedges.

A lot of people think that high heels started in the reign of Marie Antoinette or something. But they didn't. In the West, they started in the 1400s, although people had been wearing high heels in Asia for far longer.

Let's look at hair and headdresses in the Quattrocento.

Here is a wonderful profile image. This hairstyle is called “coazzoni”. 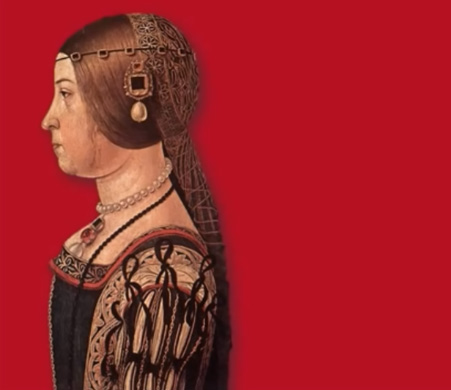 The hair was center-parted and smoothed to the head with a long (probably, often false) braid at the back, often incorporating ribbons or netting. The hair was smoothed down by some kind of product, probably olive oil was used to keep it very smooth, very flat, and very shiny.

Then, the lenza. This was a leather cord worn around the head, sometimes bejeweled. Probably, it served the function of keeping the hair flat and keeping the trinzale in place. There were no hairpins yet. The metal hairpin would be invented in the mid-1500s, so ladies didn't have long to wait, but for now, no hairpins. So the lenza was probably used to keep all of this stuff in place.

Another rather strange thing women did with their hair was this. It was called “hair taping”. They would use long strips of ribbon to secure their hair, to tape it into the most extraordinary shapes. Sometimes, another element was added – pieces of a very sheer cloth were interwoven into the hair. They could even cover the lady’s ears. These pieces of cloth were called “bendas”. 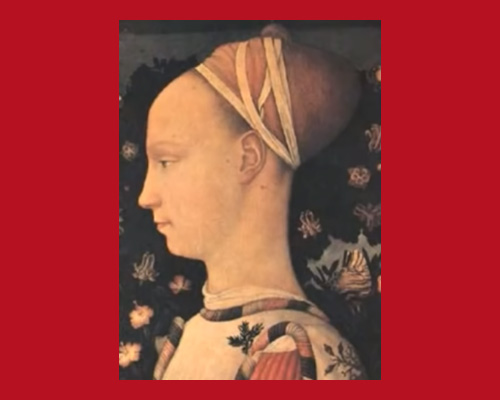 And here you see hair taping being used quite extraordinarily. Look at all of these curls and these braids, and it's all so complicated she has to tie it under her chin. Presumably, a lot of this hair was false. 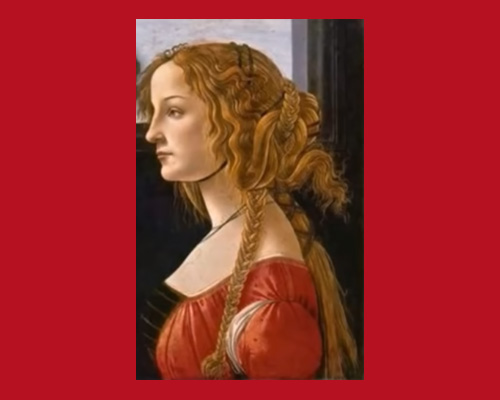 Men’s hair. This was strange. In the Quattrocento, men wore pageboy hairdos, which they would curl under with curling tongs – a very odd look.

Or they would let their hair be a little bit more natural. Men's hair usually was long, it was shoulder-length in the Quattrocento in Italy.

The headdress. It would change shape in the 1500s but called the same name. The preferred hat for ladies was called a “balzo”. And this is how it was constructed: it was made out of balsa wood or wicker; this kind of basket-weave frame over which you would place cloth.

Balzo headdress from the 1400s. Photo from Pinterest.com

You may have noticed that there was a decorative detail on a lot of these garments. This was a little craze that started in the 1400s but would continue all the way through the 1500s, called “slash and puff”. 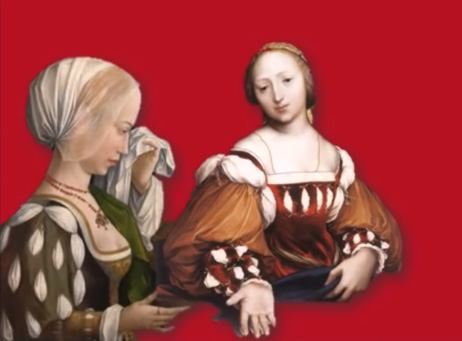 Look at her sleeve. Basically, the outer garment is slashed – have little cuts in it – and then the inner garment, the small chemise or the shirt would be pulled through, puffed out.

It explains why undergarments, these simple smocks or shirts or chemises, were so billowy and voluminous – you needed a lot of fabric if you were going to puff it through the slashes.

Let’s briefly throw a spotlight onto the Quattrocento palette because the use of color and the color combinations were so completely unique and so instantly recognizable. Here are several pieces of the Quattrocento art.

Take a look at that palette. All of those reds, dark crimson reds, a lot of gold, but also a lot of earth tones, a lot of clay tones, and touches of blue. It was really a very unique palette.

Let's do an anatomy of the 16th-century Italo-Spanish costume. This is the costume from Italy and Spain because they were the dominant cultures. When we talk about Italian fashion art and culture in this century, we talk about the Cinquecento.

You can see that the silhouette has changed. It's become quite enormous. 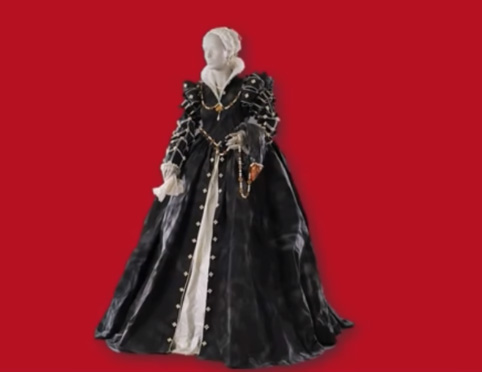 Here are some images that show you how big everything got, for men and for women. With huge sleeves, big skirts, and awful lot of billowing satin. 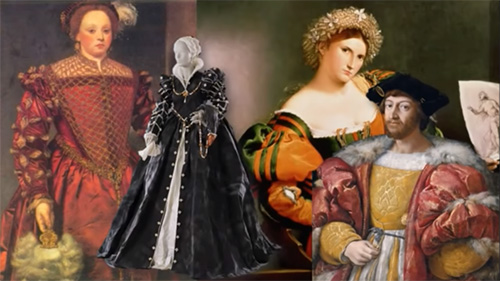 Basically, we're really working with the same layered idea. You started with your smock.

And then, we meet something new, it’s not exactly a corset, it's something called a “busk”. It was made out of whalebone, and it didn't pull you in at the waist, as corsets in the later centuries would do, it sort of flattens you out and stiffened your torso to give you a very firm scaffold, on which to hold all of this heavy fabric.

Over that, went your sleeveless gown with detachable sleeves. These detachable sleeves with all of this ruching at the top, are called “baragoni sleeves”. They're large, decorative puffs at the top of sleeves. Sometimes they would be attached to the top of a dress, sometimes they would be attached to the top of the sleeve. Why were sleeves detachable? Because sleeves get dirty very easily, and it was a big deal to launder one of these gowns. So it was easier to have a bunch of sleeves you could replace every day or every couple of days, without having to launder the whole dress. 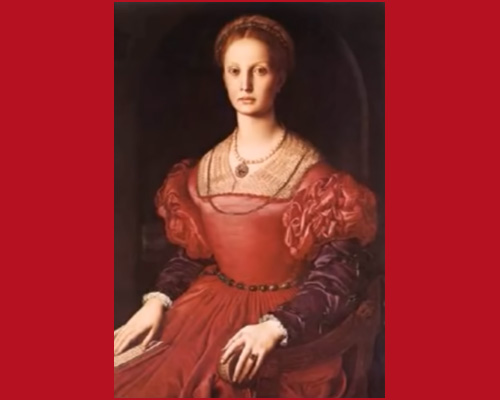 And then a balzo again, but it's taken on a very different shape. Instead of being sort of conical at the back of the head like in the Quattrocento, now it's like a big donut. 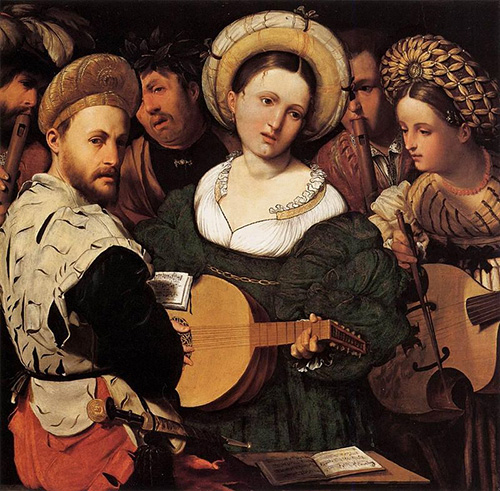 Balzo headdresses from the 1500s. Photo from Wikipedia.org

Another part of a female costume is the colletto. This was a sheer piece of fabric (sometimes lacy, sometimes it had pearls on it or beads) that was either pinned into the neckline of the gamurra, the dress, or at the beginning of the 15th century, it was pushed into the neckline, a bit like a shawl.

For men, we are getting a new piece of attire in the 1500s – the jerkin. It was a close-fitting, short-sleeved jacket worn over the doublet (although sometimes, it could be worn directly over the chemise for more casual wear or for sport). Jerkins were often made from leather, but fabric was also used.

The Spanish court had a very different flavor. It was still big but less voluminous and much more dramatic. Let's take a quick look at Spanish court fashion. 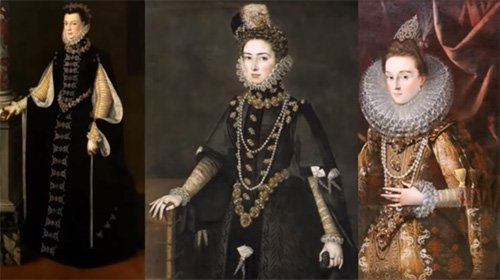 An awful lot of black velvet, black satin, and a lot of gold, black and gold together. This really marked Spanish court fashion.