The national costume of Slovenia looks pretty European. Locals call it “Narodna noša”. It was established and unified in the 19th century. Until then, there were many regional Slovenian costumes with their unique features. Some areas used their folk clothing until the World War II. But nevertheless, today, Gorenjska (Upper Carniola) folk costume is considered the national dress of Slovenia. And Slovenians around the whole country use it.

Slovenian traditional clothing was worn mostly for special occasions and holidays in the 18th-19th century. Nowadays, it is used by folklore singers and dancers, or for ethnic festivals, celebrations, to entertain tourists, etc. Very seldom, these outfits are worn by ordinary people in everyday life – mainly, in the rural areas.

It consists of a white shirt, long underwear pants, leather breeches, a vest, a scarf, long leather boots, and a hat.

The shirt is usually plain, without any embroidery or openwork. It has long sleeves. The underwear pants are white, cotton, and also plain. They are long and often have straps at the bottom to tie them to the ankle. 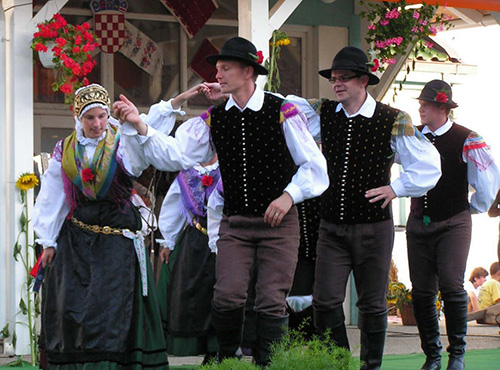 Slovenian dancers in the folk costumes. Photo from Keywordteam.net

Leather knee-length breeches are worn over the underwear pants. The breeches are similar to the Austrian or German ones, but in those countries, men never use underpants. When high leather boots are worn, the white underwear trousers are sometimes hidden. But it is common and normal if they are seen between the breeches and boots.

Male vest used in Slovenia is called “lajbič” or “telovnik”. Usually, it is red or black but other colors are also used. The vest can be made from different materials (depending on the wealth and status of a wearer): velvet, cotton, wool, etc. But almost always it is embellished with embroidery or prints; floral patterns are the most common. Rich Slovenian men used vests with silver buttons.

Man and women in the traditional clothes. The woman at the left is wearing an avba headdress, and the women at the right are wearing starched kerchiefs. You can also see the sklepanec belts. Photo from Fashion-history.lovetoknow.com

Male headdresses usually are black felt hats with flowers or feathers as a decoration. Some adornments are really beautiful and look very noble.

And the last men’s accessory in Slovenia is a scarf. The most interesting thing about this item is the way of wearing. It is worn on top of the shirt but beneath the vest. So, you can see only the ends of the scarf on the shoulders of the wearer.

It consists of a set of undergarments, a dress or chemise, an apron, an optional jacket, a belt, a headdress, a kerchief, and shoes.

The set of undergarments includes a blouse, bloomers, and petticoats. All of the items are cotton, plain, and white. The cuffs and collar of a blouse are often gathered and sometimes are decorated with lace, a small amount of embroidery, or cutwork. In some regions, women wear long shirts as an undergarment. But the established Slovenian national costume must include the mentioned set. 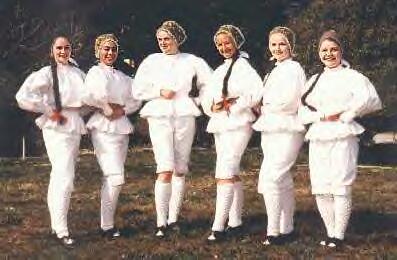 Slovenian women use a dress: long skirt and bodice sewn together. Some older variants of the folk costume have a separate short bodice but it grew out of use in time. Today, the bodice has a normal length, to the waist. The dress is bright-colored; everyday garment is made from calico fabric and festive ones – from silk, or other expensive fabrics.

An apron is worn with a dress or chemise. For a day-to-day usage, females choose linen or cotton aprons; festive garments are made from silk, brocade, or damask. The most widespread festive apron is not very wide, made of fine black fabric, and decorated with black lace around the edges. But there are various kinds of aprons made in different colors.

A jacket is used for colder weather or by older females. Sometimes it could be worn by young girls, too. For example, when she was going to the church. 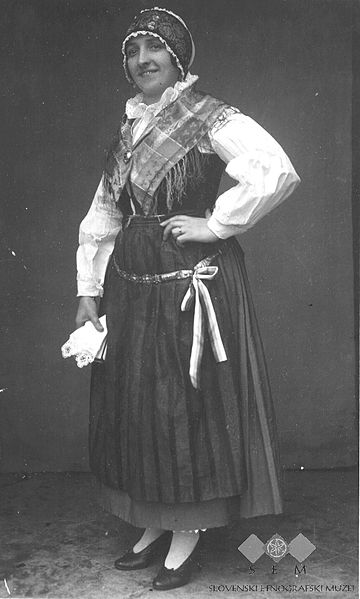 A large kerchief is worn by women around the shoulders for holidays and special occasions. Usually, it is made from silk or cotton, with beautiful floral prints and patterns. A pin holds it in place.

One of the interesting Slovenian accessory items is a belt called “sklepanec”. It is an ornate metal belt. Its length is much bigger than the waist of a woman, so it is worn at an angle on the hips. A large ribbon bow is often tied to the belt.

But the most extraordinary piece of the traditional clothing in Slovenia is a women’s headdress. Though, it is usual for European countries to use large and oddly-shaped headgears. Slovenia is no exception. Some females use simpler bonnets or kerchiefs tied around the head. But the traditional headdress is called “Tjehl”. It can be smaller (closer to the head, made from less amount of the fabric) and called “zavijačka” or larger (pretty high and wide) and called “avba”. In the past, young girls used smaller tjehls and married women preferred larger ones. Though, today this headdress is seldom seen because it is hard to make. So, these days, mostly, people who are totally fond of the folk dress wear tjehl. 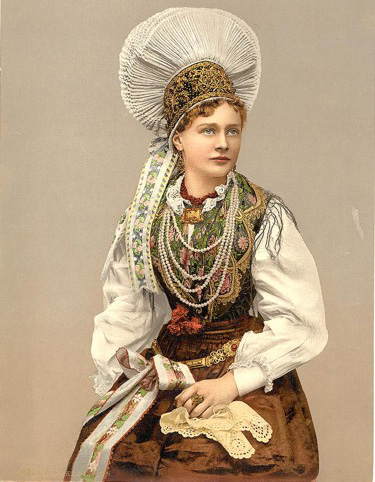 Slovenian festive and very beautiful women’s costume. You can see the avba headdress up close. Photo from Folkcostume.blogspot.com

In some areas of Slovenia, tjehl is replaced by a large starched kerchief. It is white and decorated with “white on white” embroidery. This kerchief is tied in an intricate way – the knot is at the top of the head and the ends stick up.

Slovenian females use white stockings with relief structure and black or blue shoes.