There are really curious footwear pieces in Montenegro, including not only shoes but also socks and leg wrappings. As Montenegro is one of the Slavic countries, its shoes have analogs in neighboring territories (Bosnia and Herzegovina, Ukraine, Poland, Serbia, etc.), but some features of Montenegrin traditional footwear are unique and cute. For instance, the dense lacing made from dried goat skin cord. The national costume of Montenegro is lovely and the same we can say about the local folk shoes. Come and see them here! We will share some great info about Montenegrin shoes as well.

The people of Montenegro are attributed to the South Slavic ethnic group, so their folk costumes have some common features with other Slavic clothing. For example, its similar footwear. Montenegrin traditional shoes may look pretty weird, with those turned-up toes and dense but delicate lacing, but such a design has a particular purpose. And also, there is a certain charm about these leather shoes – they’re just cute. Especially paired with thick hand-knit socks adorned with nice and colorful patterns.

In general, there are several different traditional shoes worn in Montenegro. They are opanci (the most popular folk footwear, peasant shoes), slippers, shoes, and pasamage. Most of them are worn over woolen knit socks. Men also added cute woolen leg wrappings. 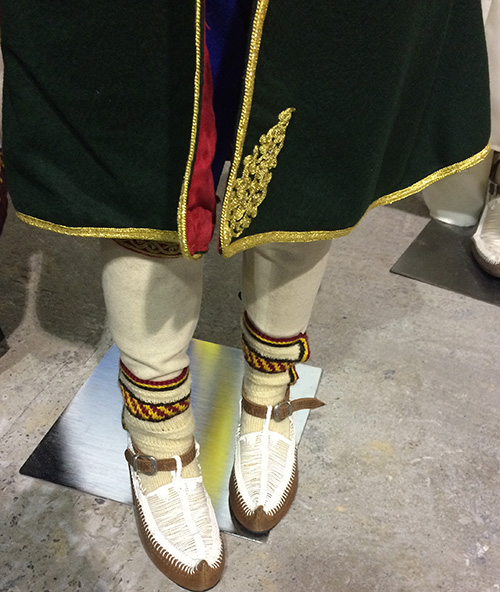 Leather footwear was put onto hand-knit socks because, otherwise, it hurt the foot during long walks. Montenegro is a mountainous country, so people had to walk a lot and their paths were rough and complicated. The shoes at the time weren’t as soft and comfy as they are now, so they needed something to protect their feet. Also, it was warmer this way.

These knit socks were of various length – below-the-knee, mid-calf, or above-the-ankle. The upper part (bootleg) was usually adorned with patterns, while the part on the foot was knitted plain. Another interesting feature was a small slit, opening, on the inner side of the socks.

If to talk about leg wrappings, they were a widespread piece used by Montenegrin men. The traditional male trousers are sort of breeches, just below the knee length. So, the men needed to cover the calf to keep themselves warm. That’s where leg wrappings step in. They are warm, woven from wool, and often decorated with embroidery. Usually, Montenegrin leg wrappings are white, though other colors can be seen as well. They have special hooks and eyes to fit them tightly around the calf. And they have a very folk vibe to them, these pieces add a great deal of local traits to the outfit. 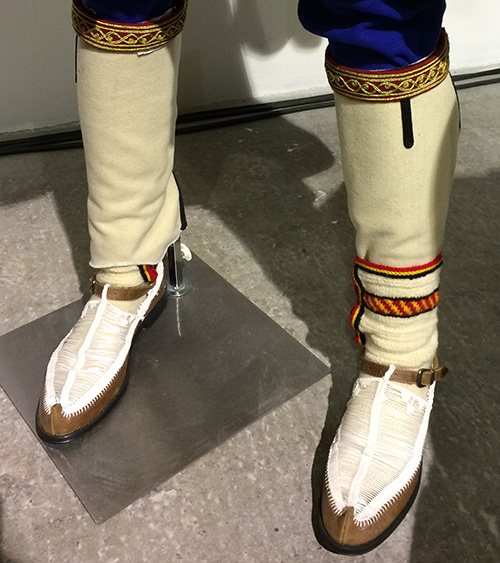 Ok, let’s get to the Montenegrin traditional shoes.

The most popular and famous among them are the so-called “opanci”. They are low leather shoes similar to “postoly” (traditional footwear worn in Poland, Ukraine, Romania, etc.). The opanci are made from cow leather, they have turned-up toes and don’t have heels. Interesting fact: for summer opanci, people used salted cow leather, and for winter opanci, unsalted leather. The top part of a shoe is densely laced with cord or leather strips. There is also a leather strap to tie the opanci to the feet because they have to fit tightly. The locals put a soft sole inside this footwear to make it comfier. In the past, the lacing cord was made by Montenegrin men at home – they dried and stretched goatskin, removed the hairs, and cut it into thin strips, which were afterwards used as the cord. 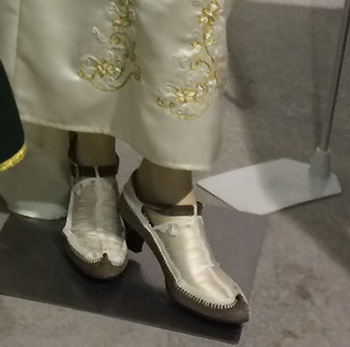 The traditional Montenegrin slippers are called “nanule”. They have a wooden sole and leather upper part. This footwear has Oriental origin. Similar shoes we can find in Bosnia and Herzegovina, Serbia, Syria, Turkey, Lebanon, and many other countries around the world.

The pasamage shoes are another variant of folk Montenegrin footwear. They are simple shoes, similar to slippers. Unfortunately, we couldn’t find any more info about these shoes, so let us know if you can share with us any knowledge you have. 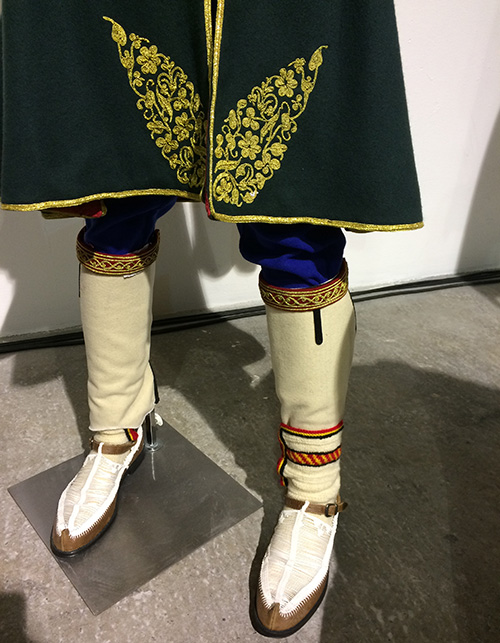