There is no single national costume in Malaysia. But all of the outfits can be divided into several main categories: Malay, Chinese, Indian, and Aboriginal dress (Orang Asli). Malaysia is a country where different cultures mix and intertwine. But the more interesting it is to learn about the clothing traditions of Malaysia. There is a wide variety of folk costumes used by the locals and the descendants of the immigrants from other countries: from simple outfits made of the natural materials to intricate attires adorned with complicated needlework.

Malay men wear a loose tunic, trousers, a sarong wrapped around the hips, and a headdress. The tunic is called “baju melayu”. The sarong is called “sampin”; its ends are sewn together. Malay male outfits are usually made from bright-colored cotton or silk.

As a headdress, a cap called “songkok” is used (it has a shape of a truncated cone). Another popular Malay headdress is called “tanjak” or “tengkolok”. It is made from a long songket cloth (traditional Malay handwoven fabric with gold or silver threads) folded and tied in a special shape. 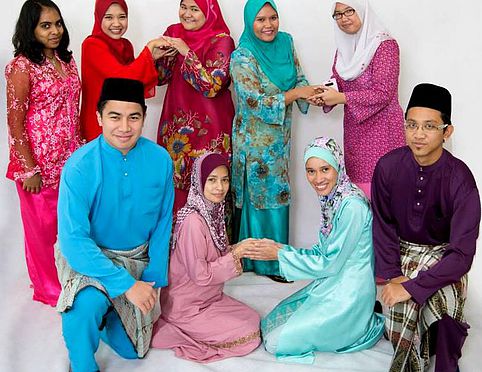 Malaysian Chinese men (the immigrants from China and their children) traditionally use a short- or long-sleeved shirt, trousers, and sandals. The trousers are made from light fabric. In the hot and humid climate, such pants are comfy. The shirts are made from the same fabric as women’s cheongsam (the attire of Malaysian Chinese women) but the buttons are on the front part.

Malaysian Indian men are the descendants of the immigrants from India. So, their traditional costume looks much alike with the Indian folk clothes but it has some features of the Malaysian dress. The traditional attire of Malaysian Indian males usually includes a kurta, a lungi, a sherwani, or a dhoti. The kurta is a knee-length cotton or linen shirt. It is ornate, adorned with embroidery and patterns on the fabric. It is worn with baggy trousers. The kurta is a formal garment and the most popular one among Malaysian Indians. The lungi is a sarong; it is wrapped around the waist. The light fabric helps men in Malaysia stand the hot and humid climate. This garment is informal, used in a day-to-day life. The sherwani is a light long (below the knee) coat; it is often worn over the kurta. The dhoti is a long (4.5 meters) piece of cloth wrapped around the waist and legs so that it forms a kind of baggy trousers. The sherwani and dhoti are used less frequently in Malaysia than the kurta and lungi, but still, all four garments are in use. 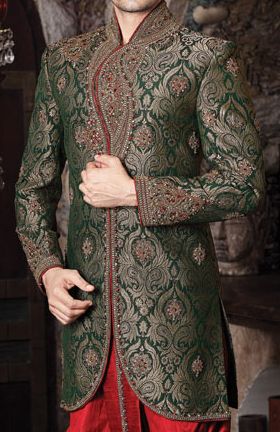 Orang Asli male dresses are the costumes of aboriginal tribes of Malaysia. There are 18 such tribes in this country. Each of them has its own ancient clothing traditions. But there is the main feature typical for all of them: Orang Asli outfits are made mostly from the natural materials (grass, tree bark, palm fronds, and etc.). Aboriginal people of Malaysia are very skillful with such materials. The shapes and ornaments of the garments are passed down from one generation to the next.

Malay women. Before Islam became popular in Malaysia, local women wore sarongs tied just above the chest – they were called “kemban”. Later, Malay females replaced the kemban with more modest garments: a knee-length blouse, a long skirt, and a scarf or shawl. The blouse is called “baju kurung”, the skirt is called “kain”. The shawl – sarong – is colorful and bright. There are several ways of draping the sarong depending on the outfit and the needs of a woman at the moment. For example, the sarong can be used as a baby sling – the name of this shawl is “selendang”. When sarong is worn as a headscarf (it is called “tudung” or “tudong”), it covers the hair, neck, and ears. The face is left open. In Malaysia, tudung is a formal headdress used in offices, schools, other institutions, and also, for the formal occasions.

Another Malay folk garment is a baju kebaya. It is a tight-fitting two-piece dress. Kebaya consists of a dress and a blouse, made from light materials (silk, nylon, polyester, or fine cotton) and decorated with floral patterns. Kebaya is often worn with a sarong. Usually, this attire is considered less formal than the baju kurung. It is often used by Malay women in day-to-day life.

The traditional Malaysian outfits are often made from locally produced fabrics called “songket” and “batic”. The songket is a handwoven brocade fabric; the cotton or silk threads intertwine with gold or silver threads. This fabric has a striking shimmering effect. It looks really gorgeous with all the patterns woven into the cloth that are gleaming in the sun. The batik is a fabric made using a special technique of wax-resist dyeing. It is covered with great prints and looks beautiful. Thanks to these fabrics, Malaysian folk clothes look ornate, expansive, and festive. 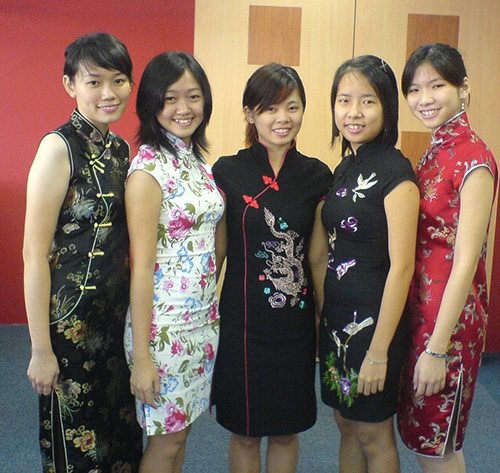 Malaysian Chinese women are the descendants of the immigrants from China. They keep some of their traditions but adopt a lot of Malaysian features and peculiarities. That’s why their folk costume is not fully Chinese or completely Malay. They wear a dress called “cheongsam”. It is a tight-fitting gown, also used in China. The material is always very fine: silk, satin, or other similar fabrics. The dress is usually long, with slits on both sides. It has a stand-up collar and a few buttons on a shoulder.

Another traditional costume of Chinese immigrants in Malaysia is called “Baba Nuonya” or “kebaya Nyonya”. It is a beautiful outfit with complicated openwork on the fabric. It consists of an undergarment, a jacket and a sarong as a skirt. There are several brooches that keep the material in place. Nice handmade beaded slippers called “kasot manek-manek” complement the costume. Kebaya Nyonya is usually adorned with a complicated needlework. The technique is called “tebuk lubang” (the translation is “to punch holes”). The floral patterns are embroidered on the fabric, and the insides are cut off. The result is similar to a fine lace. 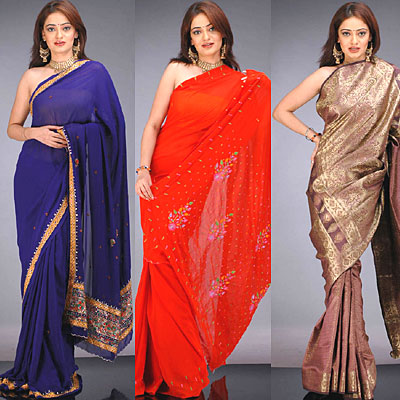 Malaysian Indian women, of course, wear sarees. It is a very popular garment in India, Sri Lanka, Pakistan, and other Asian countries. Sari is a long piece of ornate cloth (0.6-1.2 meters wide and 4-8 meters long) that is worn wrapped around the body of a woman. There are hundreds of ways of draping sari. In Malaysia, the descendants of the immigrants from India wear sari with a petticoat and a blouse called “choli”. The pallau of the sari (its richly embroidered end) is draped over the left shoulder. The sari is winded tightly around the body and reaches the floor. This garment is multifunctional – it is used either as a formal dress or as an everyday outfit. Sari is suitable for any occasion.

Another traditional costume used by Malaysian Indian females is a salwar kameez or a Punjabi suit. It consists of a long sleeveless tunic, trousers, and a shawl. All the pieces are made from silk and richly embellished with embroidery, patterns on the fabric, gold and silver needlework, gems, etc.

Folk clothing of Orang Asli people. Photo from Wikipedia.org, the photographer is Pogadaev

Orang Asli female dresses are the costumes of aboriginal tribes of Malaysia. There are 18 such tribes in this country. Each of them has its own ancient clothing traditions. But there is the main feature typical for all of them: Orang Asli outfits are made mostly from the natural materials (grass, tree bark, palm fronds, and etc.). Aboriginal people of Malaysia are very skillful with such materials. The shapes and ornaments of the garments are passed down from one generation to the next.