History of Japanese national apparel. What did the Japanese wear before kimono?

Today, everyone knows that a kimono is a traditional costume in Japan. It’s hard to find a person who has never seen a kimono at least in the photos or in movies. But surprisingly, kimono isn’t the oldest Japanese attire, as well as silk isn’t among the first fabrics originally used to make clothes in Japan. So, what material was popular before silk? And when did people invent the first kimono? These are curious questions we’re going to answer right away. And more fun facts about a kimono are ready to amaze you.

According to archaeological finds in Japan, ancient Japanese outfits were made from hemp and had a simple cut, which seems pretty obvious.

Around the 1st millennium B.C. (3,000 years ago), cotton and silk clothing in Korean-Manchurian style came to Japan. This type of attire was popular among the local people for a long time.

Later, in the 6th-8th century A.D., Japanese fashion got under the influence of Chinese traditional clothes. During this period, Japanese and Chinese garments looked practically identical. But everything changes, and fashion changes as well.

In the Heian period (794-1185), the first prototype of a modern Japanese kimono was created. And it quickly became favored and beloved among the people of Japan. Sure, it changed and evolved throughout centuries, but the main idea remained the same.

In the 13th-15th century, the major features of a kimono were formed. Particularly, they differentiated the attire used by different social classes.

The next era, around the 17th-19th century, brought more simplicity to the cut and design, and also added more decorative features to the appearance of a traditional kimono. That’s how a modern variant of Japanese kimono gradually acquired the look we know today.

Unfortunately, in the second half of the 19th century, the Westernization of a local folk dress started. And the traditional kimono was almost absolutely forced out of Japanese fashion. These days, we can seldom see a kimono in the streets of Japanese towns and cities. Only folk festivals and traditional ceremonies still can make the tourists and locals alike feel delighted and excited to witness authentic kimono worn by all the rules.

The traditional cut of a kimono is very different from that of European folk attire. The kimono accentuates the shoulders and the waist of a wearer, hiding all the other curves. The silhouette is flat, with simple straight lines, because that’s how the Japanese consider the idea of beauty. While Europeans loved corsets, bustles, and curvaceous figure, the Japanese people used to adore a flat silhouette. 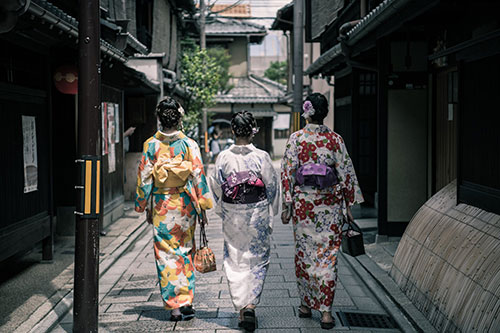 The fabrics used to make a kimono are usually inelastic. The sewing patterns are rectangular and simple. This, by the way, helps to save on the fabric because very little waste is left after the cutting of a garment.

The threads used to sew a kimono should be soft to avoid the damaging of the cloth. The fabric was very expensive in Japan (actually, it was costly all around the world up until recently, when synthetic cloth was invented), so people estimated it highly and treated it carefully. Unfortunately, the usage of such delicate threads meant that a lot of vintage kimono garments were destroyed with time. 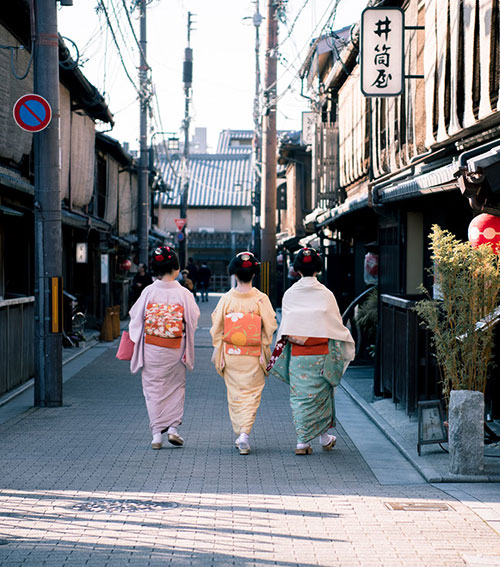 The kimono belt called “obi belt” was traditionally made of fine wool. Its function was not only functional but decorative as well. The belt adds a bit of bulk to the outfit. The obi is always ornate because it’s a very important part of the costume. Its length can reach 3 m and more. The knot of the obi belt in the past determined the woman’s social status and more, but today, women are able to use any knot they like.