Japanese people have been producing, exporting, and using silk fabric for hundreds and hundreds of years. Traditionally, the process of making silk fabric for the kimono is handmade. It requires a lot of hard work, skill, and fondness. Today, we’d like to introduce a fine technique of hand-weaving the silk cloth to you. It is called “Yuki-tsumugi” and it is one of the crafts included to the UNESCO’s List of the Intangible Cultural Heritage of Humanity.

Yuki-tsumugi – a fabric produced using the most traditional method of silk-weaving. This technique is still being preserved to this day in Japan. Every single threat to be used is soft and non-twisted. Each thread is delicately spun from silk cloth by hand. It then undergoes the tedious process of tying tens of thousands of spots according to the design. And, finally, it produces a design with a technique which Japan proudly recognizes as unsurpassed.

Every step of the production of Yuki-tsumugi is carried out by hand. It is a form of Japanese art, hidden inside its simplicity and elegant design. Yuki-tsumugi represents the beauty of Japan itself.

Yuki-tsumugi pattern. One of many

Yuki-tsumugi is a product of an area that extends 20 kilometers along the Kinu River, which runs through Ibaraki and Tochigi Prefectures. The name originates from Yuki City of Ibaraki Prefecture. It, once upon a time, was a castle town of the Yuki family, which flourished as the center of economic prosperity of this region.

The ancestors of sericulture are enshrined at the Okuwa Shrine of Komori district in Yuki City. For a long time, people working with Yuki-tsumugi have shown a strong devotion to the shrine. During the annual festival held in spring, they dedicate Kagura – Shinto ritual dance and music.

During the 6th century, Ashiginu – the origin of Yuki-tsumugi was presented to the Imperial Court as silk cloth of high quality. Today, it is still being preserved at Shosoin, the Imperial storehouse of ancient times in Nara. 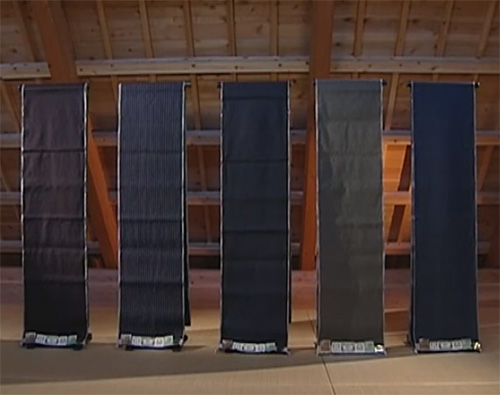 Later on, it was favored by samurai as the textile for their kimono. In the 17th century, it became known throughout Japan as Yuki-tsumugi. Eventually, it became popular among tradesmen and artisans in kimono and established its reputation. 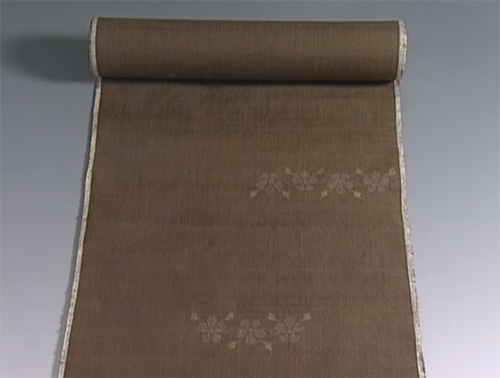 Toward the end of the 19th century, the method of weaving splash patterns called “kasuri” prevailed, and they were produced in mass quantities. However, when western clothes were becoming standard, Yuki-tsumugi was favored as high-class fashion kimono.

Secrets and peculiarities of this weaving technique

Now, we will introduce the process of Yuki-tsumugi production.

First, remove cocoons of poor quality. Boil your remaining cocoons with baking soda for 2 hours to remove the scum. This is called “mayuni”. 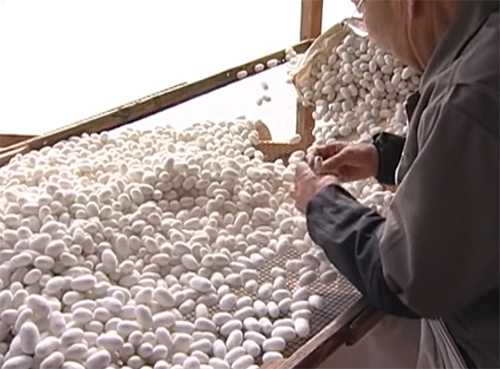 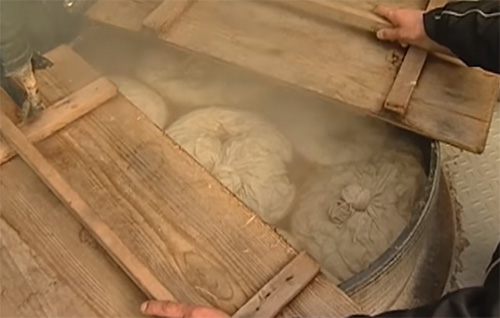 In a tub of lukewarm water, the craftswoman softens the cocoons and expands them into a sack-like form by hand. After that, she leaves it to dry in the shade to make a silk floss. This process is called “mawatakake”.

Expanding the cocoons into a sack-like form 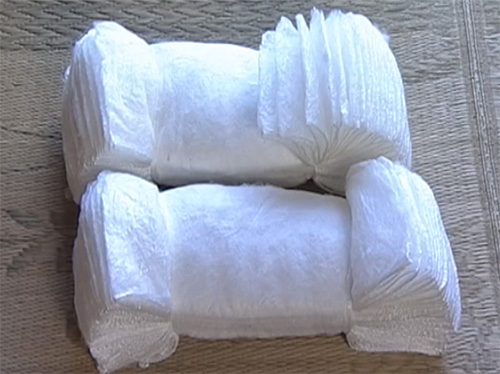 Spin the silk floss. This process is called “itotsumugi”. Normally, at this stage, the thread is twisted for reinforcement. However, in Yuki-tsumugi, the thread is spun without twisting. This is called “munen-shi” and this type of thread is not found anywhere else in the world. This gives Yuki-tsumugi its distinctive style and softness. 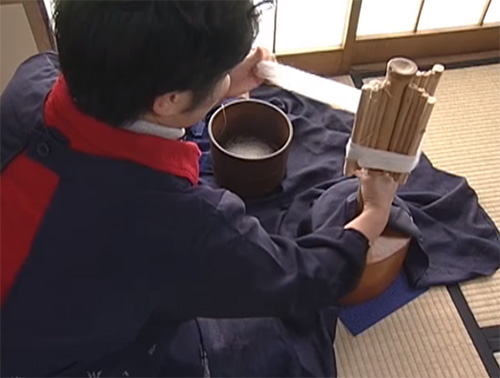 Itotsumugi – the process of spinning the silk floss

It takes 2 to 3 months to spin the amount of thread, necessary to make one cloth.

The main feature of Yuki-tsumugi is using the diligently spun thread for both horizontal and vertical way.

Wrap the thread around the board and set the number in the length required to be one roll. Then, separate them into upper and lower thread. This process is called “seikei”.

Warping the threads to measure the needed length

Next, conduct kasuri-kubiri (a technique of tying the threads) onto the thread to make a pattern. First, set the third onto a frame and draw splash patterns using Japanese ink according to the design. Kasuri-kubiri is a process which prevents a tied-up area from soaking up the dye. 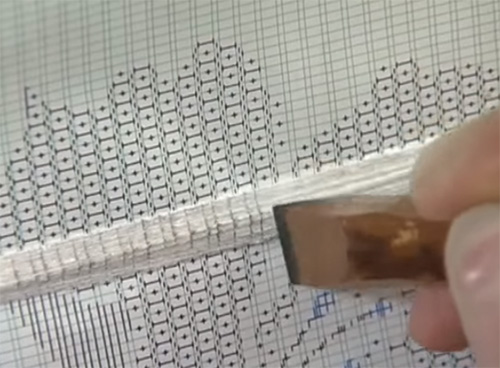 Drawing splash patterns on the threads

The patterns of Yuki-tsumugi was simple in the past. However, kasuri-kubiri requires a more precise process, as the designs are diversified into stripes and splashed patterns.

Put the kasuri-tied threads around the end of a pole, beat it on a platform with the dye to make the color penetrate. This process is called “tatakizome”. This dyeing method is unique to Yuki-tsumugi. 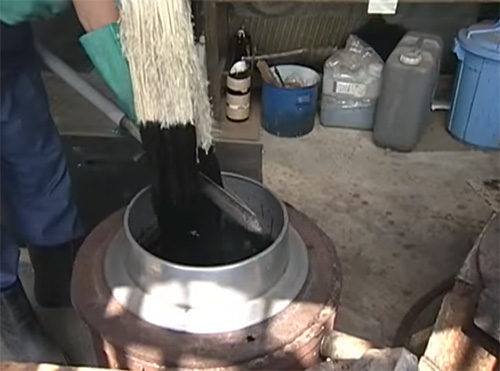 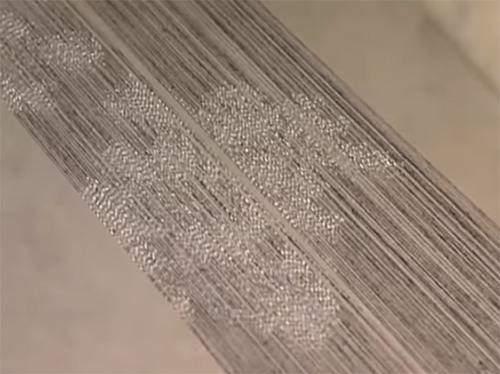 Finally, Yuki-tsumugi is woven, using the most primitive loom called “jibata”. Another name for it is “izaribata”. The mechanism of the loom remains the same for 1,500 years. The weaving takes much time and labor – the weaver releases the right amount of tension to create a light, warm, and durable fabric. The texture is specific to Yuki-tsumugi. It takes a month for even an experienced artisan to weave a roll of cloth. It may take over one year for high-quality products with complicated designs. 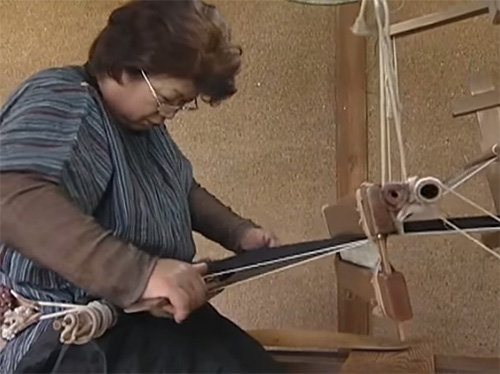 The process of weaving

Only when you slip your arm through and feel the fabric on your skin, can you fully understand its magnificence. The completed product is surprisingly light, yet warm. The more it is worn, the better fit it becomes. The kimono is durable and can be worn across three generations.

Yuki-tsumugi has been recognized for its artistry. In 1956, it was designated as important Intangible Cultural Property by the government. The skillful handiwork, endurance, and the subtle sensibility of heart, as the Japanese, furthermore, the sense of beauty, genetically inherited in ethnicity – the sophisticated technique justifies it all. The artisans spare no labor in every step of the process. 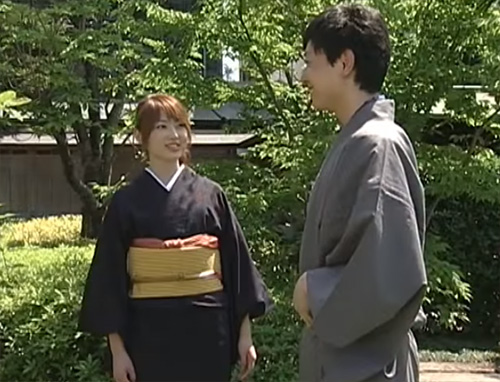 Kimono made from Yuki-tsumugi fabric

It is indeed a product made with every effort. The fabric, woven with loving care – that is Yuki-tsumugi.

#1 Daisuke 2019-06-27 08:18
I think the most striking point on Yuki tsumugi is its non-twisted finger spun silk thread. And, thanks to that, its texture becomes amazingly soft and light as if silk cocoon itself.
Historically it had originated from famers' wear made by famers themselves, making use of wasted cocoons. Considering its ethnical origin, I wonder resemble traditions could be found somewhere in the world, but I cannot find so far.
So do you know about resemble tradition that making a non-twisted thread by hand-spun?
Quote
Refresh comments list