American Civil War fashion gave us beautiful garments – floating skirts, delicate fabrics, elegant decorations, and so much more. This period of American history is meaningful and complicated, while the female dresses used at that time are pretty simple but extremely graceful. Here are several women’s and girl’s dresses (typical for the 1860s) exhibited in the Kent State University Museum, the US. They can tell us a lot about the Civil War fashion and lifestyle.

The effect of the Civil War on fashion cannot be thoroughly explored without focusing on cotton. The impact of the war was global in scope owing to the centrality of cotton to manufacturing around the world. Fashions of the 1860s continued to feature the cotton fabrics that played such an important role in the American political economy. 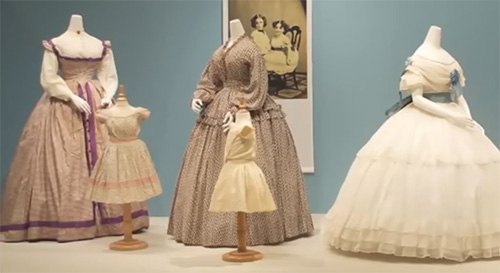 The pieces on display attest to the range of quality and texture that were available during the period. One remarkable aspect of many of these cotton fabrics was their lightness.

This white dress demonstrates how sheer these fabrics could be. 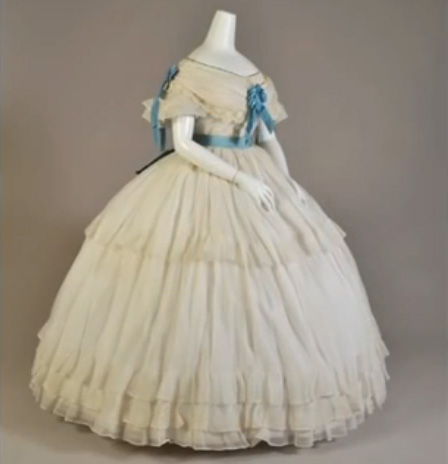 The blue and white striped cotton of this dress is also extremely sheer. This dress is also remarkable for the print. Rather than simple solid stripes, the gray is created through an intricate pattern of intersecting lines. Indeed, many of the cottons in this exhibit have been printed. 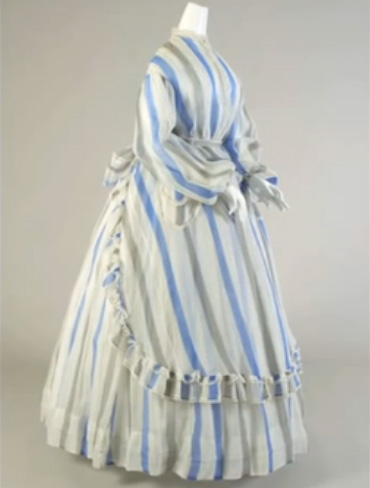 This dress with plum-colored zigzag stripes demonstrates the complexity and abstraction of some of these prints. 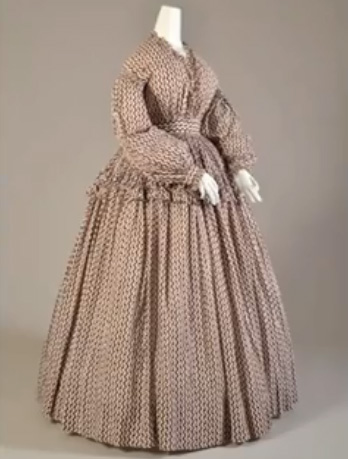 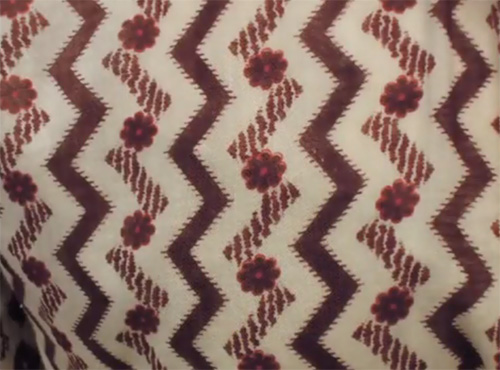 This blue dress shows a slightly more traditional motif. This fabric has been dyed with indigo, the natural means of achieving a blue color. The resulting color is deeper yet less intense than the blues achieved with newer synthetic dyes. The yellow and white floral sprigs are applied in areas, that have not been printed with blue, in a technique called “resist printing”. These undyed areas must be treated with a substance, such as wax, that resists dye. 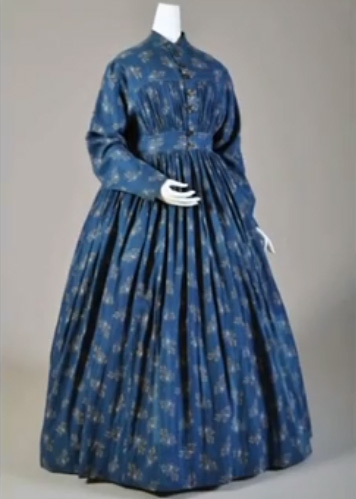 The patterning on this girl's dress appears to be more conventional. The closer look reveals some of the patches in the fabric. Clothing during this period was very precious and garments that have been worn out or damaged couldn't simply be thrown away. A number of the pieces show signs of having been patched and darned. 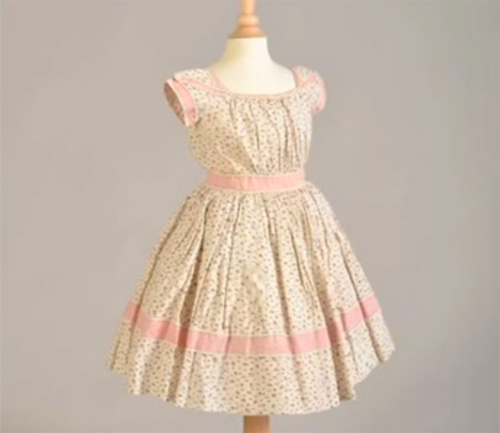 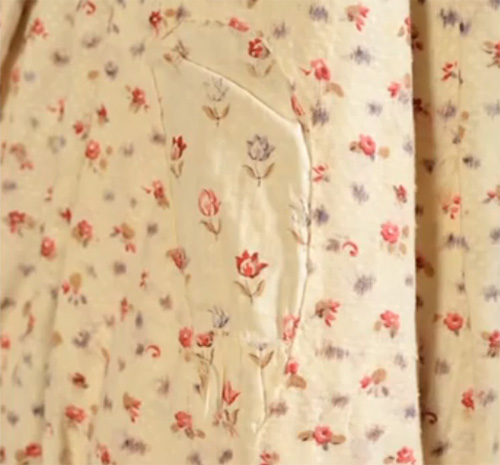 While the blue day dress and this little girl's dress are more modest garments, cotton was actually used in formal wear as well. 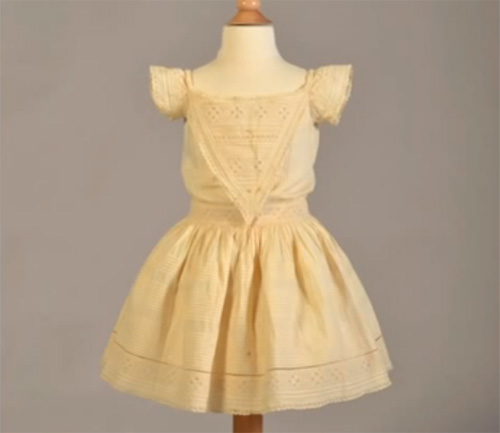 In addition to this white dress with the blue sash which could have been worn as an evening dress, this ivory dress with green stripes would have been appropriate for the evening. The fabric is a very fine and sheer weave, known as “tarlatan”. It's a stiffened cotton that was highly priced. 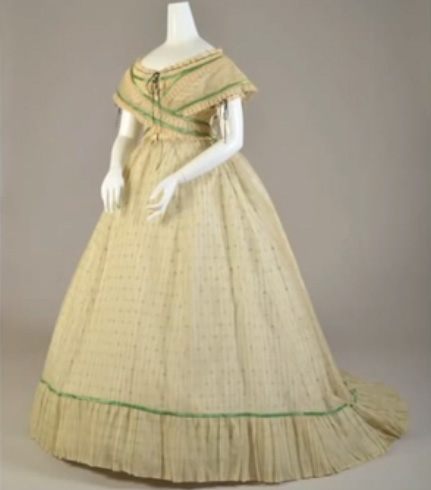 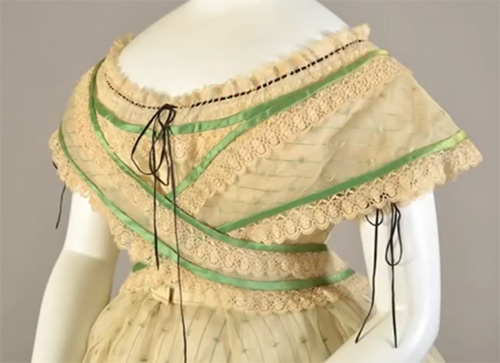 Cotton could even be used for wedding gowns. This beautiful dress, worn in 1868 by Louisa Johnson Smith, is composed of layer upon layer of sheer white cotton. The trimmings around the hem of the skirt are made of rows of gathering. The almost weightless cotton achieves a striking effect. When costumes are presented in museums on mannequins, they lack movement – which is such a critical component of clothing. When walking down the aisle in this dress, the bride must have seemed to float. 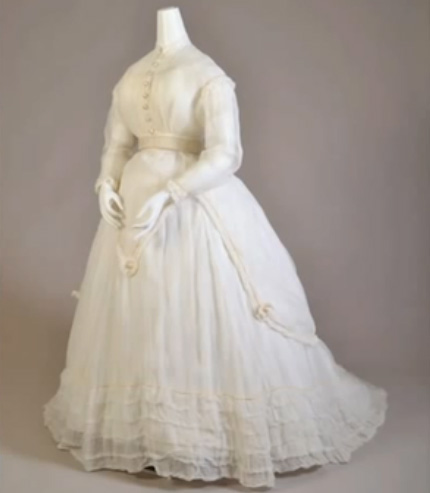 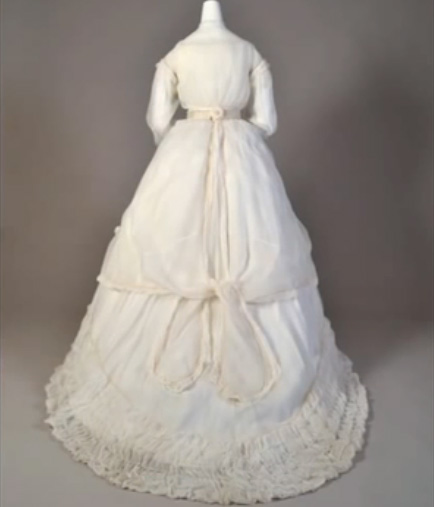