Peruvian women love these adorable and eye-catching skirts. They’re so bright! Though such full skirts aren’t very flattering to most female figures, somehow they suit the local women just fine. Moreover, Peruvian ladies even wear up to 10 polleras one on top of another to make the silhouette look ampler. Believe it or not, plenty of polleras used in Peru today are handmade, with a hand-woven border to embellish them. Despite industrially-produced clothes being so available these days, Peruvians continue to honor their old clothing traditions.

These traditional Peruvian skirts called “pollera” are voluminous and colorful. Actually, the skirt itself is typically black and adorned with a bright woven border, but still, the skirt looks colorful and festive.

Polleras are usually thick and warm because they’re made from hand-woven wool. And in the mountainous Andean region, it’s the perfect garment. Of course, these days, some women prefer cheaper industrially-made skirts (of the same cut and design). But many Peruvian ladies still wear handmade polleras. Some of them even make their skirts themselves, which is no simple task – you have to know how to sew and weave and how to create beautiful patterns on a loom. 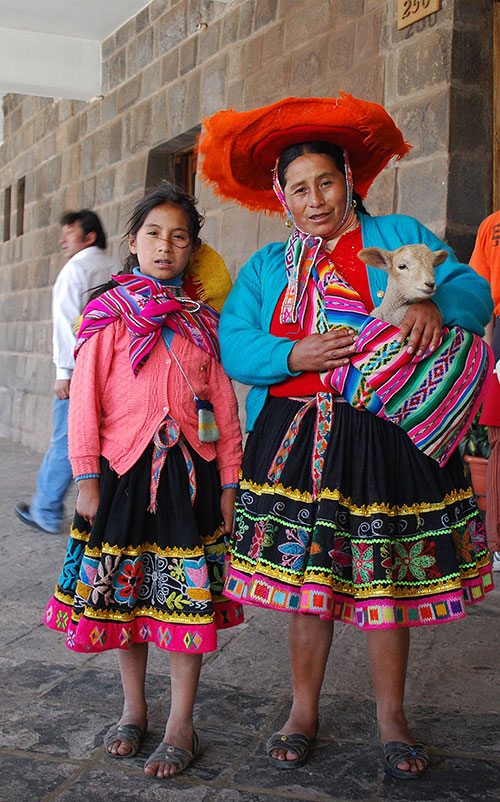 The colorful border on a pollera skirt usually is a separate piece. It is called “puyto” and is attached to a wide black skirt. Sometimes, women weave or order a puyto – basically, a strip of colorful patterned cloth, and sew it to the hem of a purchased skirt. This colorful border can be very different – narrow or wide (it can be as big as half of the skirt and bigger), created from only 2 colors or extremely multicolored and bright. The most widespread colors are red, pink, yellow, and green.

The ornamentation of a puyto depends on the region of origin of a woman or simply her taste. In the past, you could tell where a woman was from by her pollera, but today, females don’t have to follow the tradition as strictly, so they often buy or make a puyto they like.

Peruvian women can wear polleras in daily life, but the most spectacular view is created for special occasions, when they put on up to 10 or even more skirts one on top of the other. It creates the effect of wealth and opulence.

The pollera skirt is so tightly knit into Peruvian clothing tradition that one could think it’s an indigenous garment for this region, but the history of a pollera is not that ancient. It first appeared in South America during the Spanish colonization. And the local women fell in love with a long and voluminous Spanish skirt, so they adapted it to Peruvian culture and made it their own unique garment. Peruvians came up with the name “pollera” because they called a birdcage so and the round shape of this skirt is very similar to a birdcage.

This skirt is more popular in the rural areas of Peru, where it can be seen in the street, worn by ordinary women on a daily basis. In the urban areas, females use their polleras during the national holidays, folk festivals, or dancing. But in recent years, pollera skirts even made their way into the fashion industry – some fashion designers made them a trend.