The outfit that is considered a Cuban national attire today originates from the 19th century and is a lovely mix of European and African fashion with a combination of slave, carnival, and gypsy features. Sure, before the 1800s and the arrival of white and black people to this land, Cuba was populated by the local aboriginal tribes who had their own folk dress styles and clothing traditions. But today, those native outfits are almost forgotten and aren’t used in daily life, unlike the more recent 19th-century traditional garments that gained the status of Cuban folk costumes. So, we’ll mostly talk about these outfits in this post.

A typical Cuban male attire consists of a guayabera shirt, trousers (practically any style can be worn with a guayabera shirt), a neckerchief, a straw hat, and shoes. The apparel is rather simple and modern-looking.

The most distinctive element of this costume is the guayabera shirt, also called a “Havana shirt”, “Mexican wedding shirt” or “cigar shirt”. Cubans claim that this garment has a local origin, but many other South American and even some Asian countries disagree in this matter. No one can say for sure where and by whom a guayabera shirt was invented. But it is charming and comfy, so men love it. 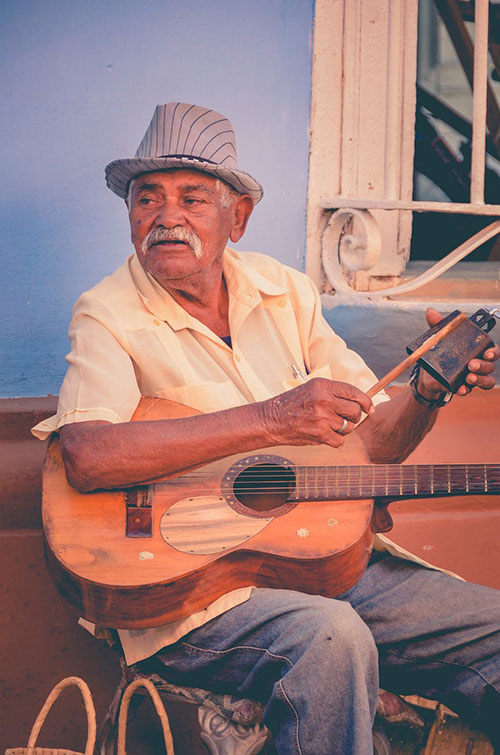 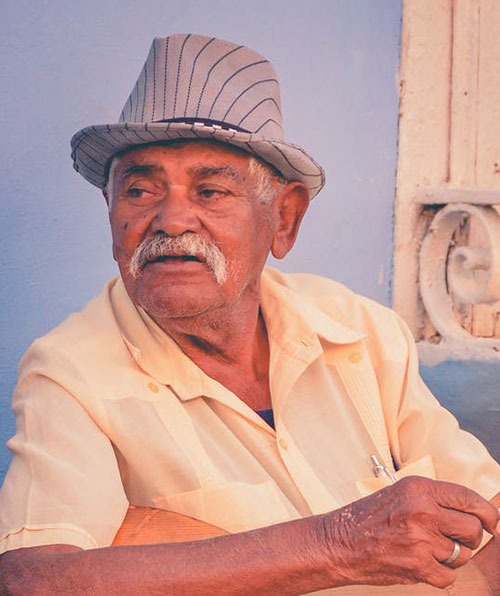 The design of a guayabera shirt is elegant and cute. It is cut similar to a dress shirt, it is a button-down shirt with two groups of closely spaced vertical pleats on the front and back, and it has 2 or 4 front pockets. There are short slits on the sides of a shirt, and the guayabera shirt is always worn loose. The fabric is light and breathing, typically made from white or light cotton or linen – for men to feel comfortable in the hot Cuban climate.

There is another typical Cuban shirt called a “guarachera shirt”, but it isn’t worn in day-to-day life, only for folk dancing. That’s because the design is very eye-catching and non-practical. This shirt has wide sleeves with a lot of flounces, often colorful. So mostly, a guarachera shirt is only worn by folk dancers during their performances.

To protect the head from the hot sun, Cuban men wear straw hats, usually shaped like a cowboy hat. This accessory is widespread among both ordinary people in the street and folk dancers.

Women in Cuba wear much more opulent, colorful, and dramatic folk clothing than men. Their dresses are multicolored and ruffled, with long wide skirts and intriguing off-shoulder necklines. The style was adopted from Spanish flamenco dress in the 19th century. But Cuban outfits aren’t fully Hispanic, they’re a mix of Spanish and African trends. Cubana dresses are often made from the fabric with floral motifs or stripes, or checkered prints, or even a combination of all mentioned patterns. Lace and ribbons can be used for trimming.

These gowns are perfect for dancing, so they’re widely used by Cuban folk dancers, as well as ordinary local women.

And Cuban headdresses are typically African in style – colorful head ties intricately draped around the head, although, they’re usually monochrome colored or with floral patterns, while African head ties are embellished with multicolored African patterns. 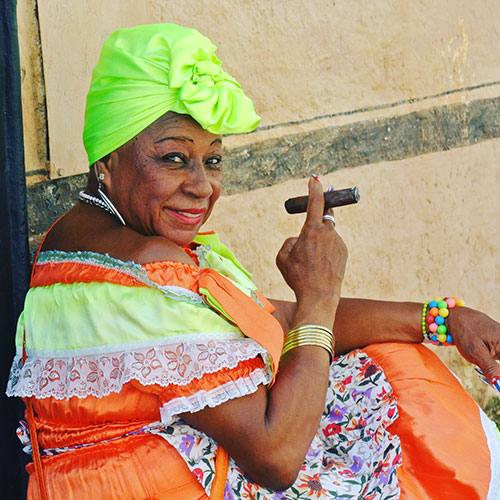 The Cuban love for guayabera shirts can be seen in a modern female equivalent of this garment – a guayabera dress. It is a simple summer button-down dress adorned with the same pleats that occur on male guayabera shirts. This is perfect attire for daily life in the hot and humid Cuban climate – it’s light, simple, with no excessive fabric, attractive but not vulgar. And while guayabera shirts are typically white, guayabera dresses can be of any color.

Such an accessory as a hand fan is a friend of a Cuban lady, so you can see many different fan designs. They add a nice touch to the look and help to cope with the heat.