South Africa is a multicultural country with a long and complicated history. Its clothing traditions are very interesting because they are so diverse. We can’t name just one official national costume of South Africa. Every ethnic group in this part of the world has its own folk dress, heritage clothing, traditional accessories, etc. So, let’s look at the traditional outfits of the biggest local ethnic groups – Xhosa, Ndebele, Zulu, and Venda.

Xhosa traditional attire is colorful and eye-catching. It is characterized by printed fabrics, beadwork, animal fur in male costumes, and embroidered garments.

Xhosa men wore comfortable garments that didn’t restrict movements as daily wear because they originally were hunters and warriors. Their attire was often adorned with animal skins and fur. Festive outfits included bright embroidered skirts, tunics and/or rectangular pieces of fabric thrown over the left shoulder, and beaded necklaces.

Xhosa women dressed in long skirts and aprons made from colorful printed or embroidered fabrics. Embroidered capes and blankets were worn around the shoulders. The look was complemented with a lot of beaded jewels (necklaces called “ithumbu”, bracelets, and anklets). Also, married women wore a headscarf called “iqhiya”.

The main and most popular Ndebele traditional garment is an apron. Both men and women wear special aprons, though they look different. Other characteristic features of Ndebele folk clothing are intricate beading and geometric patterns (geometric shapes can be seen in beading, embroidery, and prints). 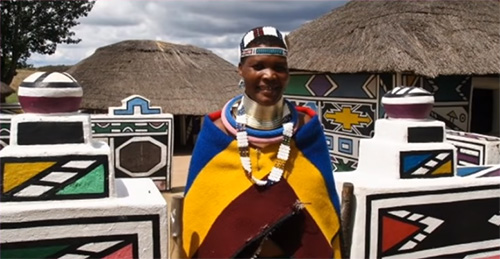 Married women exchange their isiphephetu aprons for leather aprons embellished with geometric designs. Married women continue to wear isigolwani and add other folk jewelry pieces to the pile – copper rings called “idzilla” around the neck, ankles, and arms. Also, they start to cover their chest with colorful striped or beaded blankets.

Interesting thing about Zulu traditional attire is that only their royals are allowed to wear leopard skin because this animal is considered the king of all predators.

Zulu men traditionally wear clothes made from animal skins and feathers. The lower body is covered with two aprons – “isinene” apron in the front and “ibheshu” apron in the back. The males also wear tufts of a cow’s tail called “amashoba” on their upper arms and below the knees. Married men also use a headband. 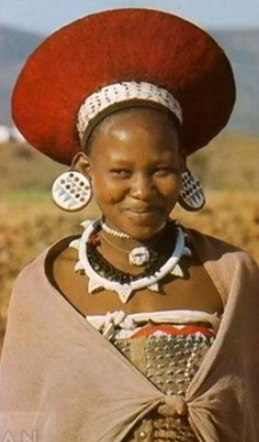 Zulu women dress differently according to their age and marital status. Young girls wear short hairdo and dress only in short grass-reed skirts with beading. Engaged women start to grow their hair and cover their bust. Married women cover their whole body – they wear thick cowhide skirts, a cloth to cover the breasts (but today, more and more women replace it with cotton vests or beaded bras), and beaded necklaces. Also, Zulu women like to wear a large and intricate beaded headdress.

Venda men originally wore a loin-cloth called “tsindi”. It has a triangular shape, is made from animal skin, and is worn sort of like thongs. To warm up the body when the weather was colder, Venda males added a cloak to their attire. In modern times, men of this ethnic group dress in trousers and shirts made from nwenda cloth.

Venda girls wear a small apron called “shedo” and some beaded jewelry. Later, when girls become older, they add a wrap-around garment called “nwenda”. It is a colorful striped piece of cloth worn at the waist or around one shoulder. Of course, the folk outfit is complemented with beaded necklaces, bracelets, headbands, and other adornments.