Types of weaving looms. Choose the one for you

Weaving fabric is one of the oldest folk clothing crafts that exist. People did it millennia ago and continue to do it today, although our modern fabrics are industrially woven for the most part. But some artisans and enthusiasts make hand-woven cloth these days as well. If you would like to try, the first thing you need to know is what type of weaving loom to choose. There are several basic types of looms, and we’ll discuss their peculiarities here.

The process of weaving is interlacing vertical and horizontal threads of yarn to create a solid piece of cloth. The vertical or longitudinal threads are usually called the “warp” and the horizontal or lateral threads are the “weft”. To create a wide strip of fabric, you need many warp and even more weft threads, so people invented a tool that helps organize all these threads – a weaving loom. Usually, it’s a wooden construction, more or less complicated, depending on the type of loom.

The first looms used thousands of years ago were a lot simpler than modern devices. But just imagine how a woman created a loom and wove on it, say, 5,000 years ago! Here’s one of such looms – it’s a reconstruction, of course, of an ancient vertical weaving loom used by people of the Cucuteni-Trypillia culture (appr. 4800-3000 B.C.). You can see simple loom weights made of clay that served to hold the warp threads taut on a loom. Also, a stick serves as a shuttle. The loom is very primitive, but it works, and that’s all that matters. This reconstruction is exhibited in Ukraine, in Vinnytsia Regional Museum of Local History. 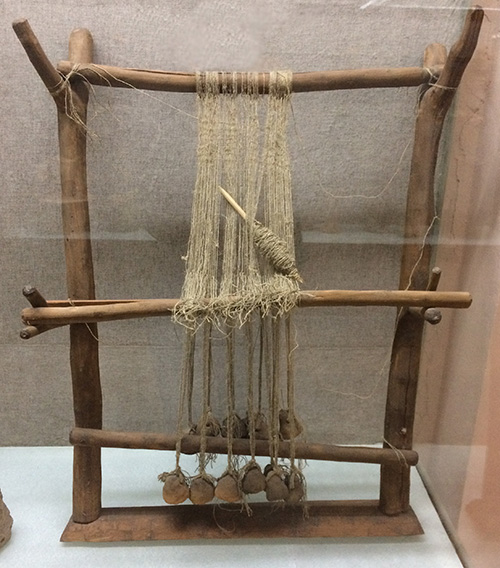 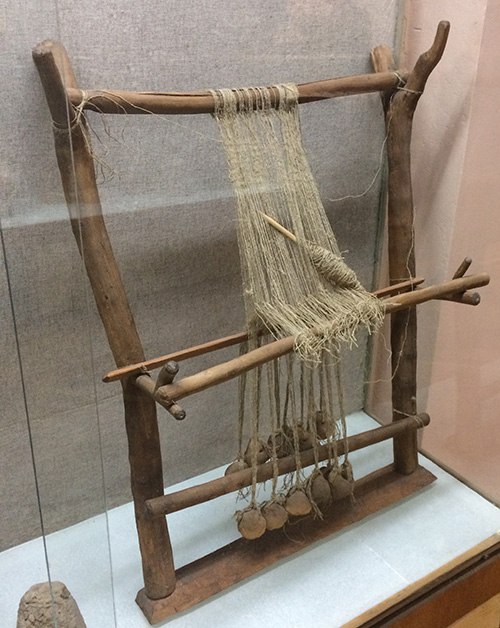 And this is another reconstruction of a similar weaving loom from Ancient Greece. Exhibited in Berlin, Germany. 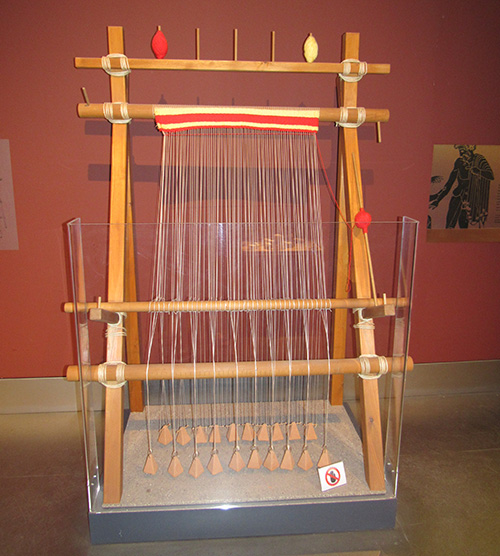 So, let’s look at various types of weaving looms. Who knows, maybe you’ll fall in love with one of them.

The simplest weaving loom is the backstrap loom. It’s great because the construction is rather primitive, it’s portable, so you can easily carry it with you, and it doesn’t need a specialist to set it up. Although weaving on a backstrap loom is not as simple as it might seem – you’ll need some time to learn to use it and some experience to do everything right. One end of the loom is attached to something – a tree, a post, etc, and the other end is tied around the weaver’s body to create tension for the threads. This loom can produce long but not very wide strips of fabric. And the complicity of a pattern depends only on the skill of the artisan. A backstrap loom is popular in South America and Asia. 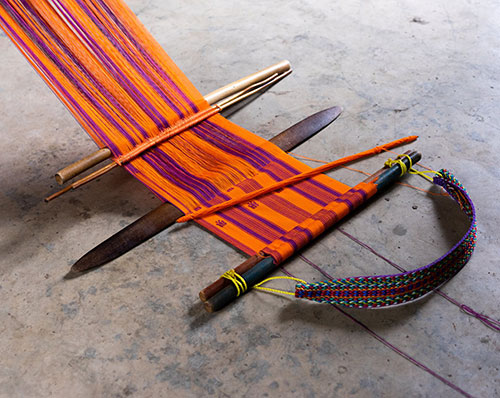 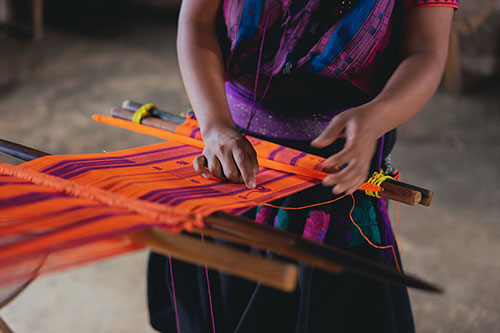 This type of weaving loom is also very simple. Most tapestry looms don’t even create a shed – an opening between some of the warp threads where a shuttle goes. It’s a minimalist frame loom with warp threads tightly attached to the frame, and you push a yarn needle or even a thread (weft) using only your fingers between the right warp threads to create a pattern. You don’t have to run the weft threads all the way across the warp, only across a specific segment where this color is meant to be. This method of weaving allows to use many different colors of yarn easily, without any shuttles or other instruments. 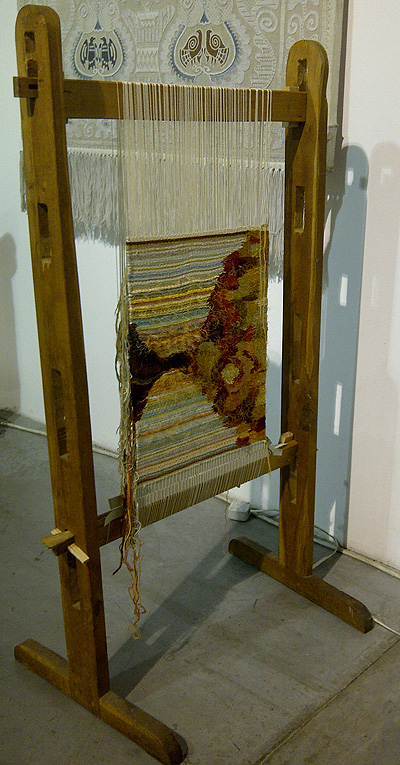 This loom is portable and very handy. It is perfect for creating narrow strips of cloth, like belts, bag handles, decorative borders, etc. You can’t make a wide piece of fabric with this loom. But you can carry an inkle loom with you in a handbag and start weaving in just a second after taking it out. Beginners often start weaving on this type of loom, but experienced artisans also use it, they can create much more complicated patterns on it.

This is a portable stand weaving loom, good for beginners. Although, it can be used without a stand as well. It has 1 or 2 rigid heddles (a heddle is a set of looped wires or cords in a loom, with an eye in the center through which a warp yarn is passed before going through the reed to control its movement and divide the threads) that allow to weave simpler or more complicated patterns. If you’re an inexperienced weaver, this device might be a good start for you.

These looms are called so because they are comparatively small and are put on the table or stand for weaving. They are smaller than floor looms but more complicated than a tapestry loom or inkle loom, etc. It’s like a tiny version of a floor loom. Most table looms have 4 or 8 shafts. You can make narrow strips of fabric on such a loom but wider than on an inkle loom. And it takes some learning and getting used to this type of loom.

These weaving looms are large, sometimes 2-3 meters wide. They stand on the floor and are good for creating wide pieces of cloth. These looms can be simpler and hand-manipulated or more complicated, electronically controlled. They are used by pro artisans and factories. And floor looms are used practically in all corners of the world for centuries now. They’re the most complicated and multifunctional looms and require some skill. 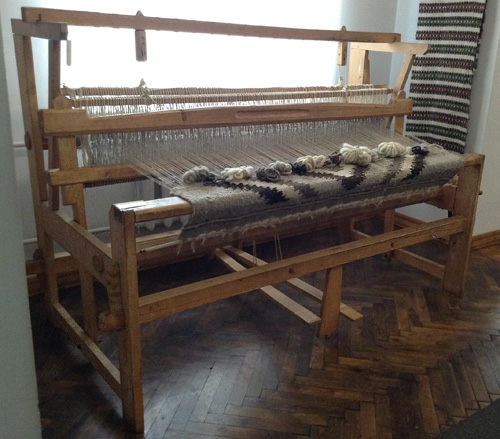 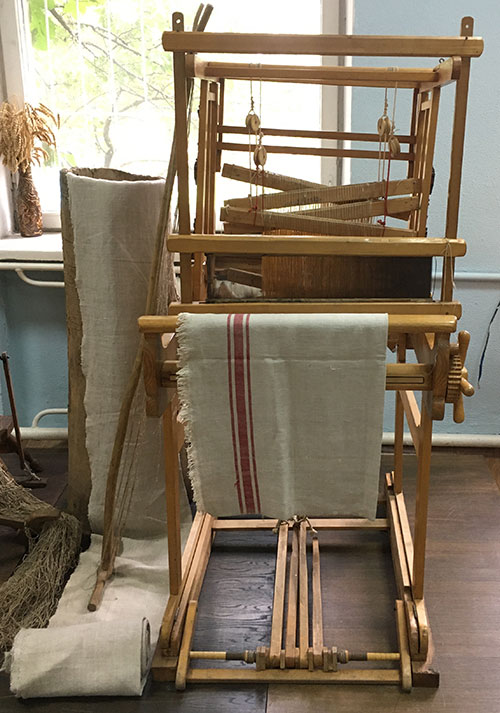