Russia is trying to exterminate Ukrainian culture along with people. Europe is next. Save Ukraine – save yourself

Tomorrow will be the 100th day of Russian-Ukrainian war. 100 days of fighting for freedom, 100 days of loosing people we love, 100 days of tears, fear, and anger, but also, 100 days of survival and heroic efforts to protect our land, our culture, and our honor. Are you sure you’ve personally done enough to help Ukraine defend European values and security? Because if Ukraine fails to hold back and fight down Russia, your cities will be bombed next, your houses will be destroyed next, your children will be raped and killed next. That’s for sure, even Russian government itself admits it, so make sure this global world’s enemy is stopped in Ukraine and war doesn’t get to your country.

Ukrainians are doing our best to stop Russian invasion and drive out the enemy from our territory. We realize that we’re at the forefront of the war between Russia and the Western world, civilization and degradation, evil and good. It’s our soldiers and civilians that die every day in this war, so we understand the price we have to pay. But we accept our role in this global counteraction and try to do everything we can so that other European countries wouldn’t go through the same horrors of war. We are ready to protect you and your families along with our own, but we need your help. Ukraine can’t win this war by herself – well, we could, by sacrificing millions of our people in unequal battle, but that would be a win-win for Putin.

Everybody, including your governments, understands that if Russia destroys and annexes Ukraine, it won’t stop. Poland, Lithuania, Latvia, Estonia, Finland, Czech Republic, and other countries will be next. These barbaric soldiers who kill, rape (even little girls and boys and elderly women), rob, torture, execute civilians for fun, and do unimaginable crimes here, in our cities and villages, will come to your land. Some doctors from hospitals in Poland already know what Russian soldiers did to children under 10 years old. Do you really want to live through what Ukraine does every day? 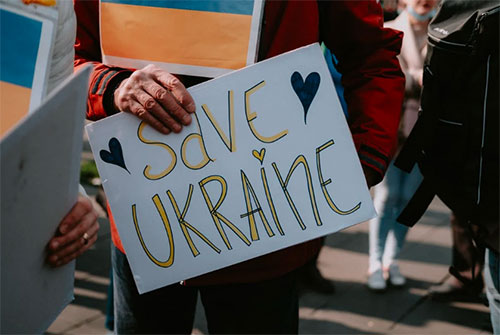 We don’t ask for NATO troops. We’re more than motivated to fight. But we need more weapons, offensive weapons – artillery systems, including multiple rocket launchers, air defense systems, tanks, planes, tactical vehicles, man-portable anti-tank systems, and, of course, lots and lots of ammunition. And we need all this asap. Not because we’re greedy or plan to start another war after defeating Russia, but because we have to protect ourselves and save as many lives of our soldiers as possible.

When some European or American politicians suggest we just give Russia some of our territories to achieve piece, they don’t understand that Ukrainians still live in those occupied cities and villages. We can’t leave them and we can’t evacuate them safely, taking all their belongings from them. Would you agree to give your town to some invader without fight? The land where your ancestors’ graves are? Where your children were born and raised? Besides, Russia doesn’t want just our land – they have plenty – they want to exterminate all Ukrainians and aren’t shy to say so. They want to destroy our culture, lifestyle, democratic values, history, etc – everything that makes Ukraine Ukraine and us Ukrainians.

If you want the civilized world to stand and Russian-Ukrainian war to stop, support Ukraine – financially, by sanctions, by providing weapons, politically. Make your government support Ukraine, demand from your politicians to give Ukraine heavy weapon, donate to Ukrainian volunteer organizations. You can influence the world’s future and your own future by being active and doing even the smallest thing to tilt the scales in our favor. Don’t be indifferent or war might come to your door. Save Ukraine – save yourself.

Over 2,280 rockets Russia launched towards Ukraine.

At least 262 kids died and 460 got various injuries, some of which are limb amputations.

There are dozens of cases of child rape and torture registered. We don’t have an exact number but such cases are known in Bucha, Irpin, Mykolaiv, Kherson, etc. The youngest child we know about is 2 months old.

Over 2,000 Ukrainian children were forcibly moved to Russia. These are orphans, kids moved together with their parents, and even separated from their families.

About 256 hospitals and other medical institutions were shelled, including maternity hospitals.

Mariupol mayor says that estimated number of people killed in this city since February, 24 is about 20,000-25,000.

Over 400,000 tons of grains were stolen and transported to Russia from Ukraine.

Over 350 cultural heritage sites were destroyed in Ukraine by Russian rockets and troops, including museums, monuments, historical sites, etc.

Thousands of valuable exhibits were stolen and transported to Russia from museums on occupied territories.

But Russian soldiers, surprisingly, don’t just steal pricey objects, gold, and money, they steal washing machines, tv sets, clothes, kitchen appliances, pickled veggies, used women’s underwear, even dog houses! They take jewelry off dead bodies of Ukrainians to give their own wives and mothers. They throw away ammo from their tanks and infantry fighting vehicles to free up some space for all that stolen goods. You can’t even imagine how different Russian soldiers are from civilized Europeans.

How can you help Ukraine?

If you want to donate money or help Ukraine somehow, here are several trusted volunteer organizations in Ukraine you can contact or donate money to.

Paypal: This email address is being protected from spambots. You need JavaScript enabled to view it.

Pay Pal: This email address is being protected from spambots. You need JavaScript enabled to view it.

paypal: This email address is being protected from spambots. You need JavaScript enabled to view it.

Or you can use any charity foundations you know about and trust.

We would like to thank everyone for your support, care, and understanding. We feel that Ukraine isn’t alone in this fight and it gives us strength and confidence in our future. Thank you.