Layers of typical 17th-century women’s attire in England. What did ordinary women wear?

Today, we’re lucky to have a wide variety of fabrics, types of clothing, accessories, comfy undergarments, and a whole lot of useful and functional items we apply to dress ourselves on a daily basis. But women in the 17th century didn’t have as many options, so they had to be inventive, patient, and hard-working to clothe themselves and actually work in those outfits. Not an easy task when you have layers over layers of clothes, sharp pins keeping some accessories in place, no sewn-in pockets, and a lot of ties and lacing to fasten your garments.

Read also: All the articles about 17th-century fashion in one place for your school and college assignments

The first layer – closest to the body – is a linen smock (also called “shift” or “chemise”). It was a basic underwear item in the 1600s. A linen smock is durable, washable, and comfy to the body. It protects the main garments from body oils, sweat, and grease.

Another part of female undergarments is the stockings held in place with garters tied under the knee. They weren’t usually very high and reached to above the knee.

And the last part of the underwear set is a linen coif that covers the hair and is easily washed as well. Coifs protected the hair from dust, smoke, and other things that might come in contact with the hair during the daily chores. Women could wash their hair a lot less often thanks to the coifs.

The next layer of clothing is the basic main garment called “petticoat” or “kirtle”. This piece is typical for the 17th century. And it consists of a bodice and a skirt sewn together to form sort of a dress. Women at the time mostly wore woolen kirtles (at least the bottom part), and many of them were red because this color was believed to be good for the female nether regions. Besides, people considered this color to be warmer than others, so red clothes were supposed to better protect a person from the cold. 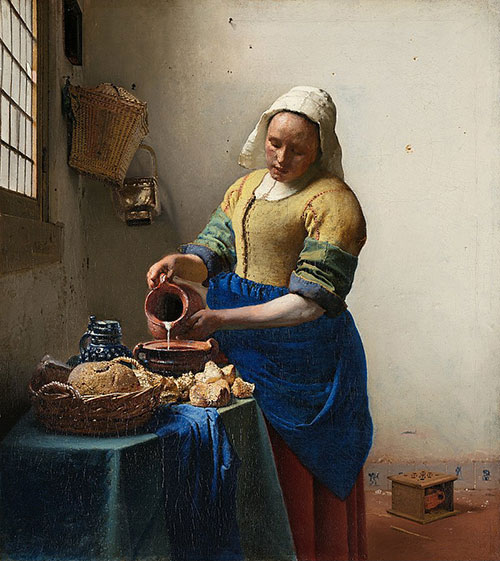 The bodice of a 17th-century petticoat is laced in the front. It’s easy for women to lace their own bodice, which supports their chest and back. In the 17th century, there were no tight corsets with boning yet, they were invented later, so these bodices were rather comfy and didn’t deform a female body. A 17th-century bodice uses several layers of fabric (instead of boning) stitched together to make a stiffer supportive frame. In such a bodice, women could freely bend, move, and do all the work.

The shoes were rather simple and sturdy when we’re talking about ordinary working women, not high-class ladies. The sole was flat or had a low and wide heel, comfortable for walking. Shoes were tied on top – no long lacing involved, just 2 holes and a short cord.

On top of a kirtle, working women put a partlet, a sleeveless garment worn over the neck and shoulders. It covered their decolletage – for modesty and warmth. A partlet was usually kept in place with ties and pins (pinned to the bodice).

The next item was an apron. In most cases, working women wore linen aprons that were cheap and easy to wash. For daily chores, linen was natural off-white or dyed blue.

Ladies often added a tie-on pocket to their apparel because there were no sewn-in pockets in women’s clothes and they needed something to carry small items. So, detachable pockets or pouches were tied around the waist or attached to the belt.

A light and fitted woolen waistcoat could be added on top of all the mentioned garments if needed – when a lady went to the church or the market, when the weather was a bit cooler, etc. 17Th-century females often used undyed wool to make outerwear because such fabric was cheaper. Interesting thing is that such waistcoats could be fastened with hooks and eyes, which is a lot more convenient than any ties and rather reliable.

Sometimes, a cap or hat was added to the attire if a lady was going to the public.

This was a typical outfit of an English ordinary working woman worn in summer. Winter apparel had even more layers of clothing.