Every fashionista has at least a couple of hats in her wardrobe and knows how to match her headdresses with other clothing. Still, fashionable headdresses aren’t an obligatory item for a lady anymore, like they used to be in the 18th, 19th, and even early 20th century. A huge variety of hat designs switched each other for years and years, each of them more unique, catchier, and prettier than the previous one. Just take a cartwheel hat – huge, round, and almost flat. It must’ve been a nightmare in windy weather!

A cartwheel hat is a curious and cute accessory. It came into fashion at the turn of the 20th century and lasted until the 1950s. It has very wide brims and a circular shape; the crown of this headdress is usually also round and shallow. Some of the vintage cartwheel hats were shaped like a pancake on a saucer – with a very large and very low crown that almost matched in size the brims. Surprisingly, such hats look pretty good and not as weird as you’d think.

Ladies loved to wear their cartwheel hats at an angle to show off the top of the hat. And they looked truly charming that way, sort of flirtatiously peeking from under the large brim.

Vintage cartwheel hat made from straw, 1911. From the Museum of history of fashion in Ukraine. It looks chic even today, imagine how fancy it appeared 100 years ago

Women were so fond of this headdress that they often chose it for their wedding look. Many brides wore cartwheel hats in the 1930s.

The material used for creating cartwheel hats was diverse – from simple straw to textured felt to exquisite silk, velvet, or taffeta. And the decorations of the crown were also different but usually elegant and simplistic. For example, it could be a ribbon with a small bow, a bunch of artificial flowers or feathers, a velvet trim, a floral print on the inside or outside of the brim (because of the angle at which the hat was worn, both sides were visible), a veil or lace covering the upper side of the hat, etc. 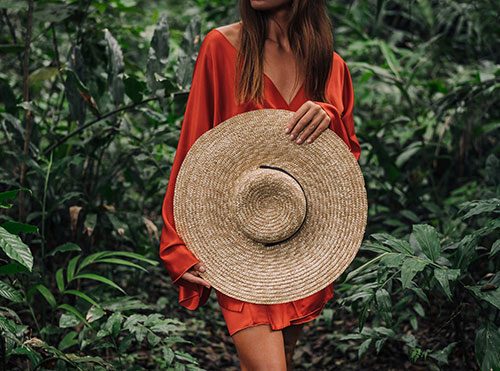 Of course, the shape and design of a cartwheel hat required some means of attaching this headpiece to the woman’s head. Otherwise, it would fly away after the first slightest blow of the wind. So, cartwheel hats were often equipped with a ribbon or band under the chin, a rubber band inside, various clips, and other devices to keep the hat firmly in place. But even with them, it was a chore to wear such a huge and wide-brimmed hat barely sitting on your head. Although, a lot of ladies would say that all this only adds to the charm of a cartwheel hat.