Medieval attire of the Bocksten Man, 14th-century Swedish mummy from a bog

Actually, the Bocksten Man is not a mummy, rather a skeleton, but fully dressed and with a generous mane of hair – looks bizarre, by the way. Why these human remains may be so interesting to fashion historians, reenactors, and people who are fond of the medieval era that the Bocksten Man became famous all over the world? Because many of his garments survived over 600 years and can be studied today. His tunic even is among the best-preserved medieval tunics in Europe. Not to mention his hood with a 90cm-long liripipe.

Lebanese 13th-century mummies in cross-stitch embroidered tunics. You can even determine the patterns

The world’s oldest clothing. Ancient garments right from the tombs

The remains of a man named later “the Bocksten Man” were found in 1936 in a bog near the Bocksten farm, Varberg Municipality, Sweden. Soft tissues of the body haven’t survived, obviously, but the bones, pieces of clothes, and some other belongings have. The remains are dated around the mid-14th century but it’s nearly impossible to determine the exact date because being in a wetland and the conservation process influenced the bone and fabric structure. 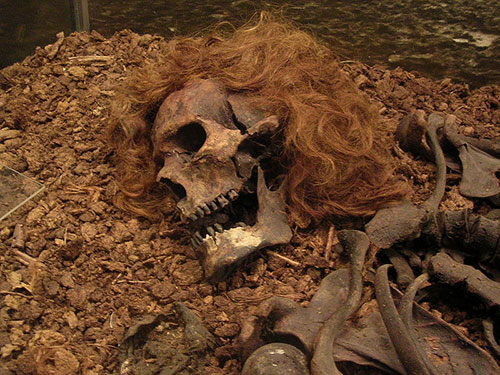 But do you know the most bizarre thing about this body? It was pinned to the bottom of the bog with 2 poles. One pole made from oak impaled the heart of the man, another pole made from beech went through his back. A horrible way to bury your dead – of course, we usually don’t bury our dead by throwing their bodies in a nearby lake. There is even a legend that says the body was staked to the lake bed after his ghost started to haunt people.

Although, we’re more interested in facts than legends and the Bocksten Man’s attire than his ghost form. So, let’s find out what we can about his medieval clothing.

Today, the body is exhibited in the Halland Museum of Cultural History in Sweden. They made replicas of his clothing items. And in 2006, scientists even created the reconstruction of this man fully dressed, so we can see his face, hair, clothes, and body type. 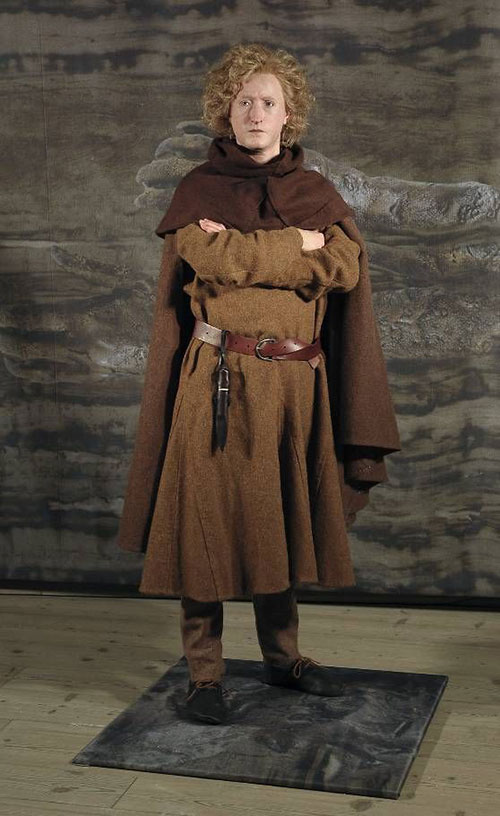 Reconstruction of the Bocksten Man

The Bocksten Man was dressed in a tunic, 2 pairs of hose, a gugel hood, a cloak, two leather belts, leg wrappings, and leather shoes. Most probably, he also wore a shirt and braies, but they didn’t survive because linen fabric disintegrates a lot quicker than wool. Still, men of the period used underwear, that’s why we say that, most probably, this man had them on as well. 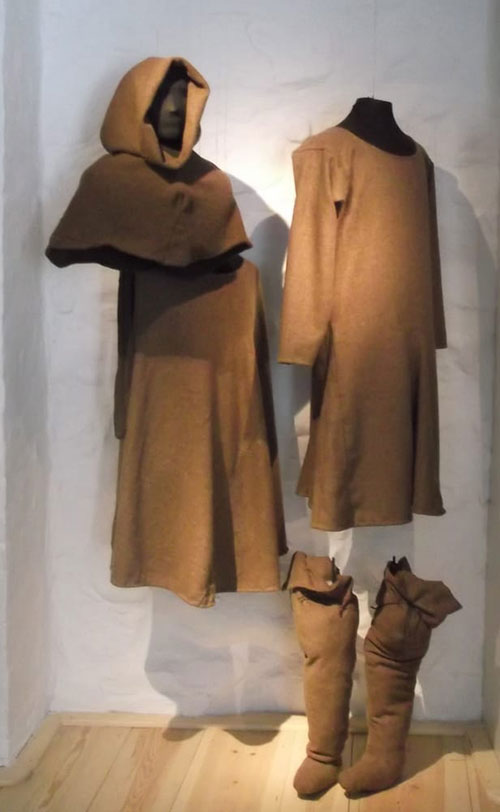 Replicas of the Bocksten Man's clothing

The Bocksten Man had with him 2 small knives and a tiny leather pouch (its function is unknown).

The tunic is made from wool. It probably was originally dyed red or reddish-brown, but after being in a bog for several centuries, the fabric turned brown. The sleeves are long and fitting, the neckline is round, and the bottom part is widened with the help of inserts. Another curious fact about this tunic is that all of the details are uneven and don’t match other corresponding details. For example, there are 4 underarm gussets, and each differs from the other 3 in shape.

Actually, the remains of this man experienced the raking through with a harrow and were badly damaged, so some of his garments were ruined.

The skeleton had two leather belts (a narrower one and a wider one), so some people assume that the narrower belt was used to keep braies in place, while the wider belt was worn over the tunic. A small knife in leather sheath was attached to the belt. There was another knife near the body, but its sheath were in worse condition and there was no sign that this knife was also attached to the belt – maybe it was carried in a bag. Although, the was no bag anywhere near the Bocksten Man – either it didn’t survive or he had none with him at the moment of his death.

The hose are two separate pieces made from wool in stretchy weaving. They didn’t fit the leg perfectly but stretched a bit to make it easier put them on and walk in them. Fun fact: the Bocksten Man’s hose differ in design (as far as we can see on the photo), so they weren’t made as a pair. Maybe he replaced one hose with a new item when it became outworn. The Bocksten Man’s hose have a complicated fastening system – leather straps and holes are involved. Usually, hose were just tied with a single garter or strap around the leg, but not this pair. These hose look more like women’s suspender stockings. 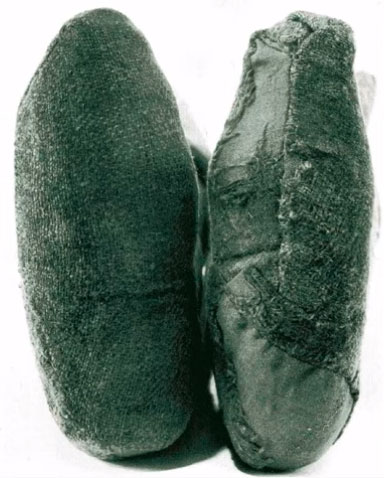 Aside from two pairs of hose, the Bocksten Man wore leg wrappings made from pieces of old clothes.

The shoes of the Bocksten Man are as unmatched as the other items of his wardrobe. The soles of his shoes differ a bit from one another. And the upper parts also aren’t identical in design. The shoes are fitting, sewn from leather, and tied with short shoelaces. 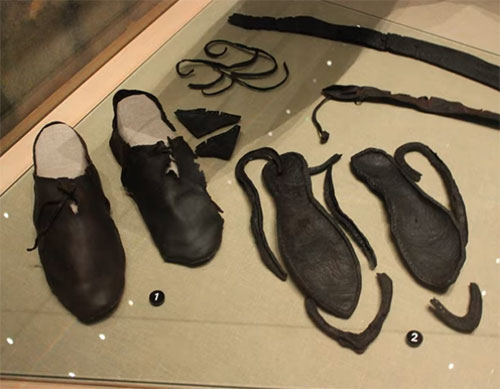 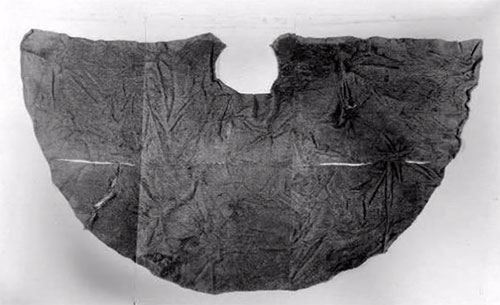 The Bocksten Man had a gugel hood on. Underneath it, there had to be a linen cap, as men used to wear this item on daily basis in the 12th-14th century. The hood itself was made from thick woolen cloth and had a long (90 cm or 35 inches long) simple liripipe. Such headpieces were a fashionable item, often worn by middle-class and high-class men.

Who was the Bocksten Man, when did he live, and how did he die? This man was around 35-40 years old when he died. His height was 170-180 (5 ft 7 in – 5 ft 11 in). The scientists and historians still argue as to who he was and when he died. We know for sure that he was killed – he has multiple head injuries. No one can tell when exactly he lived, but his outfit is dated around the mid-14th century (some say 1330s, others – 1340s-1360s or 1370s). There were many radiocarbon dating tests made – of the bones, clothes, wooden poles, etc – but the results show a rather wide time frame. Some historians think that this man was a soldier recruiter or tax collector, others consider him a priest. Although for a tax collector, his attire is too cheap and poorly made. At the same time, the tests showed that this man was well-nourished and worked little, so his status must have been above average. Also, a hood with a liripipe was a typical accessory of higher classes. According to this, the man wasn’t some poor farmer, but he wasn’t wealthy enough to buy high-quality clothes or didn’t bother. That’s why the versions of soldier recruiter or religious brother seem suited. But further tests and analyses might give us more info in the future.

Lebanese 13th-century mummies in cross-stitch embroidered tunics. You can even determine the patterns

The world’s oldest clothing. Ancient garments right from the tombs