Some of you probably have already seen people dressed in medieval clothes at some historical reenactments, medieval fairs, or even in theater/movie/museum. But can you name all of the garments and tell how many of them a person has? The Middle Ages is a period when the climate was cold, synthetic fabrics not yet invented, and people dressed modestly and elegantly. So, let’s specify and describe a typical everyday look of an ordinary working woman, not wealthy, without any fancy trinkets in her attire, just a set of clothes she needs in daily life.

The first layer of any 14th-15th-century attire – no matter male or female – was a shift or chemise. Women didn’t wear bras and panties yet. The shift was closest to the skin, usually made from natural linen, cotton, or hemp fabric. It protected one’s clothes from body oils, grease, and dirt, and you could easily wash it.

To keep the feet warm, a working woman would wear a pair of woolen hose, which reached appr. to the knee. The wool was thin and as soft as you could manage to have. Wealthier people could afford silk or made from very fine wool hose, but working women wore something much simpler and cheaper in daily life. The weave of such hose was specific to allow the fabric to stretch a bit. Of course, it wasn’t like our modern stretch fabrics, but still, it was comfier than the usual weave of clothing. The hose were dyed brown, yellow, blue, red, etc by natural dyes or the natural coloring was left.

The hose were tied under the knee with ribbons or garters so that they didn’t slide down. That garter can’t compare to the elastic bands we have on our socks and stockings, but it was better than nothing.

The shoes were made entirely from leather. Low flat-soled shoes were the most common. Often, leather ties served to keep the shoe in place.

When all these layers of clothes were on, a working woman would wear her kirtle. It was the basic dress, typically made of woolen cloth to keep the body warm in the colder late-medieval period. The fabric was rather expensive at the time, so people tried to use every strip or leftover of the cloth they had when sewing their clothing. The kirtles of working women often were created from scraps along with fine rectangular pieces of fabric.

A kirtle is usually tight-fitting – at least as much as you can afford without any zippers, buttons, and elastic bands. This dress was pulled over the head and down the body, which wasn’t always easy with fitting woolen garments. But the weave was a bit similar to that of the hose, so it allowed some stretching. 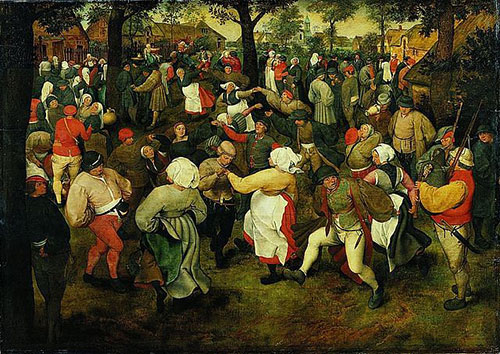 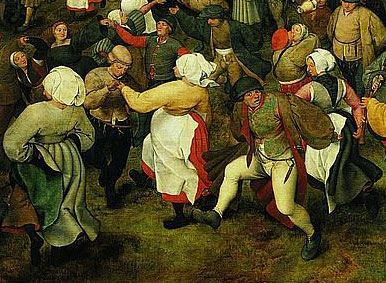 Illustration from the book “Dancing plagues and mass hysteria” by John Waller. You can see clothes worn by ordinary peasants in the late 14th century

Sometimes, women wore 2 kirtles in the late 14th – early 15th century to keep their bodies warm. During the Middle Ages, if you wanted warmth, you added another layer of clothing, especially when you were a random working woman and couldn’t afford furs. The cut of the upper kirtle was pretty much the same as of the underkirtle.

What garment has been used by women for centuries when they’re working? Of course, an apron. It was a cheap and simple item, easily switched when dirty, and it protected the kirtle perfectly. Aprons were usually made from linen, so one could wash it often and with ease.

Married women wore headdresses, which is only logical when you work a lot and your hair keeps falling into your face. But also, the hair was considered sacred and something to keep strangers away from, so only the woman’s family saw her hair loose. Many folk cultures worldwide kept this tradition for centuries after the late medieval era. So most probably, married women braided or tied their hair, put on a coif of some kind or tied a piece of cloth around the head, and added a veil or wimple on top. The cut and design of veils were diverse, women used different amount of fabric and decorations, depending on their status, wealth, age, region of origin, etc. The veil was secured with pins. Often, it covered the neck as well, going under the chin.

That’s all. An ordinary working woman would wear the mentioned garments every day.