History of hand fan from Renaissance to Rococo

Hand fans were an obligatory accessory for court ladies and wealthy women for a few centuries. And they were extremely trendy and popular. Of course, the variety of fans was huge, the fashion often changed, and fan makers had plenty of work to do, as all of the hand fans were created by hand only. What do we know about Renaissance, Baroque, and Rococo fans? Let’s look at the history of hand fans in the 16th-18th century.

The article is based on the video by Natalya Skornyakova: https://www.youtube.com/watch?v=cNo_TsRqXFM.

This lovely accessory came into fashion in Europe around the 1530s. And the first country to spread this trend was Italy.

At first, fans looked like a bunch of feathers tied together. A bit later, flag-shaped fans appeared. Women used what materials they could for their fans. But very soon, in the 1540s, merchants brought folding fans made of silk fabric from Japan. Such folding fans were awfully fashionable throughout the rest of the 16th century. Still, ladies loved feather fans as well. And flag fans remained popular in Italy until the mid-17th century, especially among Italian brides.

Feather hand fans in the 1500th were usually made from ostrich feathers – white, red, black, orange, etc. Sadly, none of them survived to our day. We can only find authentic metal handles without feathers in museums.

Hand fans were carried attached to the belt so that the lady could easily reach it and use when necessary. Everybody did this – from a courtesan to a middle-class woman to a royal.

Fun fact! Folding hand fans exported from Italy in the 16th century were scented. This made them unique among European fans.

If to talk about the material used to make hand fans, the most typical choices were feathers and fabric. But other options were also available. For example, here is an intricate leather fan. And one of the oldest surviving folding fans, too. It is dated the end of the 16th century. This hand fan is made from the thinnest leather cut into beautiful patterns. What a marvelous work! And also, the artisans soaked such leather with aroma oils, so the fan would smell deliciously for years. 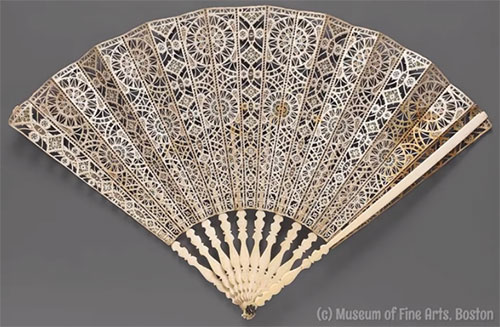 Feather fans remained trendy until the end of the 17th century. Like this vintage multicolored and elaborately-made fan. 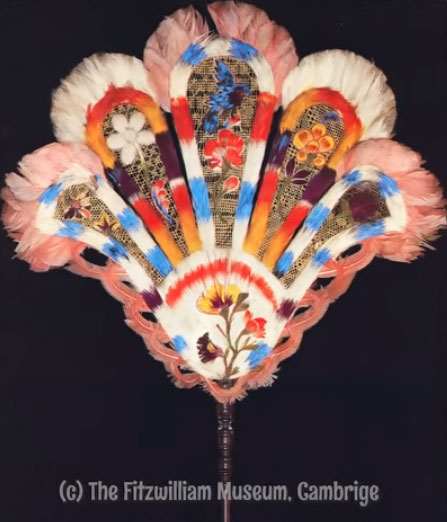 Of course, their design changed throughout the years. For example, feather fans gained a long handle. How do you think what purpose it had at the time? Mothers punished their disobedient daughters with these stick-like handles.

But feather fans lost their popularity partially because they couldn’t give their owners the advantage provided by folding fans. To be precise, ladies couldn’t have their feather fans painted with intricate images. At the same time, many famous artists in the early 1600s worked on folding fans and created gorgeous scenes or ornamentation on the front side of the fan. There were sometimes real masterpieces put on the fabric of folding hand fans. And when you unfolded your fan, people around you could see the painting clearly.

There were even elaborate fans with hand-painted mica-glass inserts set into the frame of the fan. They looked striking – a bit like stained-glass windows – and, surely, were expensive. Unfortunately, such 17th-century accessories didn’t typically survive to our day, only the metal frames can last that long. 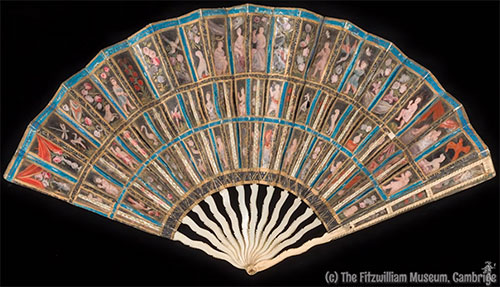 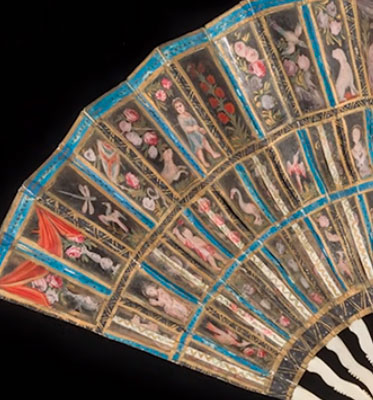 So, who made all these beautiful hand fans in the Renaissance and Baroque period? At first, fans were simply imported from Asia, mostly China. Later, merchants brought only frames, and European artists created the mount part. In the late 16th century, leather makers and gilders started to make fans in Europe. At last, in the mid-17th century, the French Fan-making Guild appeared. These artisans created various hand fans in Europe, and they often used Italian hand-painted fan mounts. The plots on these fans were diverse – religious scenes, pastoral images, ancient motifs, and even day-to-day situations, etc. 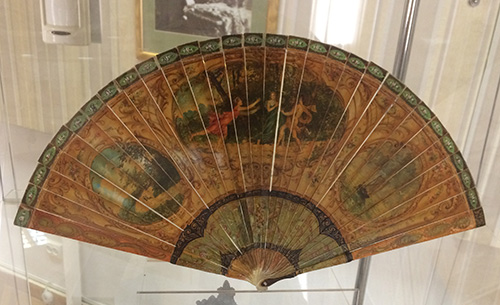 It took a lot of time and effort to create a hand fan. Sometimes, up to 10 people worked on one fan.

Fun fact! You’ve probably heard about the language of the fan used by court ladies, but actually, it’s a myth invented by late-19th-century merchants, a marketing move of sorts. Still, there were rules one needed to learn before using a fan, especially at court. For example, court ladies weren’t allowed to open their fans in the presence of the queen, it was her prerogative alone. No one could outshine the queen’s fan.