Most interesting warrior helmets from different corners of the world

In different periods and different countries, warriors wore some kind of protection in battle – armor. A very important and noticeable part of any armor is head protection. A huge variety of helmet designs exist, their styles changed throughout human history, new materials were invented, new decoration techniques appeared, new warrior fashion trends emerged. And, of course, we see the cultural peculiarities of various helmets because every one of them was handmade by some craftsman who used his skill, knowledge, tradition, etc. So sometimes, warrior helmets are extremely different from one another. Like these helmets, we’ve found for you.

There is a wide assortment of different helmet designs. Here are a few of them.

Spangenhelm (4th-11th century) – one of the oldest helmet styles used from the late antique era to the early medieval period. It was typically made from iron, with metal, leather, or horn plates inside.

Nasal helmet (late 9th-13th century) – helmets with a nose-guard. The shape and design of such helmets could be diverse, but they always had a special metal piece that protected the nose of the wearer.

Enclosed helmet (late 12th – early 13th century) – it is an early variation of a great helm, it covered the whole head and face (sometimes even the sides and back of the head). Still, it didn’t provide truly reliable protection yet.

Great helm (late 12th-14th century) – a very popular helmet style. It covered the head fully and sometimes the neck as well. Early examples had a flat top that later turned into a pointed top. This helmet protected the head rather well but wasn’t too comfortable. It had narrow slits for the eyes and ventilation for breathing. Warriors often wore it over another, lighter helmet and took the great helm off when the battle became not as harsh.

Cervelliere (late 12th century) – simple skull-cap made from steel. This was the type of helmet typically worn underneath the great helm.

Bassinet (early 14th – early/mid 15th century) – this helmet was worn for double protection underneath the great helm at first, but later replaced it. Early examples didn’t have a visor but had nose protection. Later, the visor was added.

Sallet (mid-15th century) – was often the helmet of choice in England, Italy, and Germany in the mentioned period. The design varied from country to country and region to region. But usually, a sallet had a metal tail (short or long) that protected the back of the neck. This helmet covered the head and was often paired with a bevor – neck armor that covered the neck and lower jaw.

Barbute (15th century) – close-fitting one-piece helmet with a Y- or T-shaped opening for the eyes and nose. It was inspired by ancient Greek helmets.

Armet (15th century) – a bowl helmet that protected the entire head. It was very popular in Italy. This helmet had hinged cheek plates.

Close helmet (15th-16th century) – a bowl helmet with a movable visor. It was very similar to an armet but, instead of hinged cheek plates, it had a movable bevor (neck armor that covered the neck and lower jaw).

Burgonet (early 16th century) – a bowl helmet with open face. It protected the neck, head, and cheeks. It was sometimes equipped with a buffe – a special visor that lowered rather than raised. Also, this type of helmet had a specific comb at the top that differed it from other head armor items.

These are by far not all of the existing helmets used throughout human history, but these are among the most popular and typical ones.

And now, let’s look at some of the oldest, rarest, and most curious helmets exhibited in The Metropolitan Museum of Art in New York.

Spanish sallet, the late 15th – early 16th century. This is the only known example of armor from the Nasrid period in Spain (1230-1492). It is made from steel, covered by a layer of gold leaf, and engraved with symbols made in enamel. It’s a very rare and beautiful helmet. 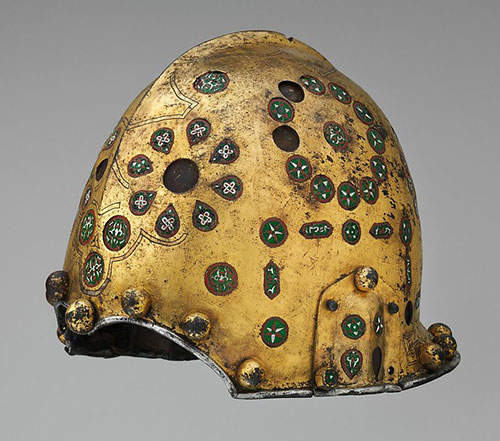 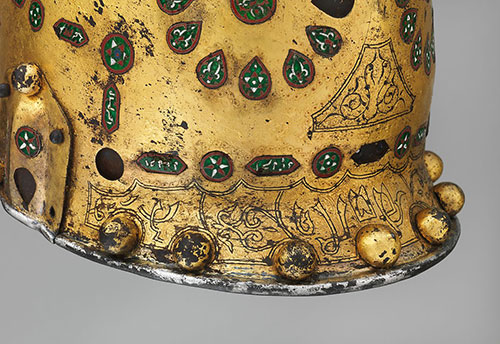 Mesopotamian or Iranian helmet, the 4th century. It is made from bronze bands, iron plates, and silver scaled sheets. A real masterpiece. And so old! 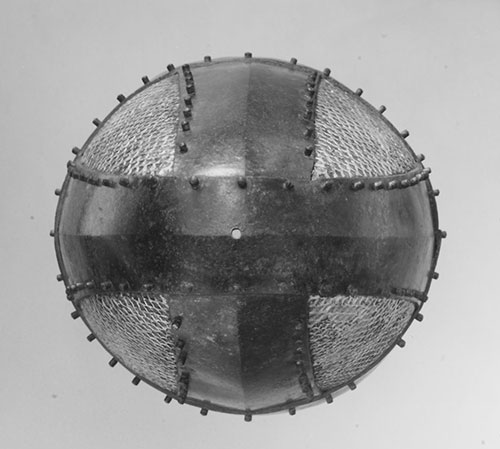 Indian helmet, the 17th century. The shape reminds of a traditional Indian turban. This helmet has a nose-guard and protection for the sides and back of the head. Also, there is a phrase in Arabic written on a steel plate, “There is no hero like Ali and no sword like dhu'l-faqar”. The dhu'l-faqar is a Prophet Muhammad’s sword and Ali is his son-in-law. 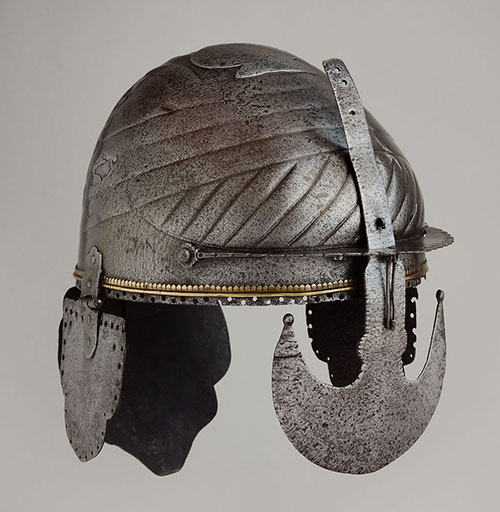 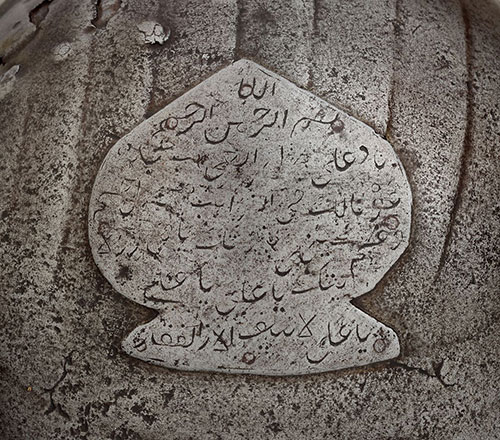 Greek bronze helmet, the late 7th century B.C. It is very decorative. The image on this armor piece shows 2 winged men with two entwined snakes. They are probably creatures of the local, Cretan, folklore. 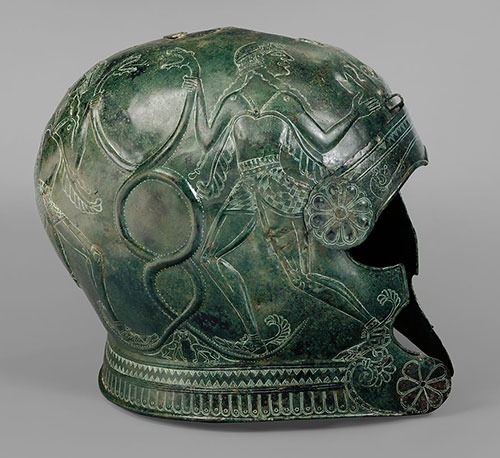 Belgian helmet, about 1575. The style was inspired by French helmets. But this particular armor was produced in Belgium and is signed by the armorer. 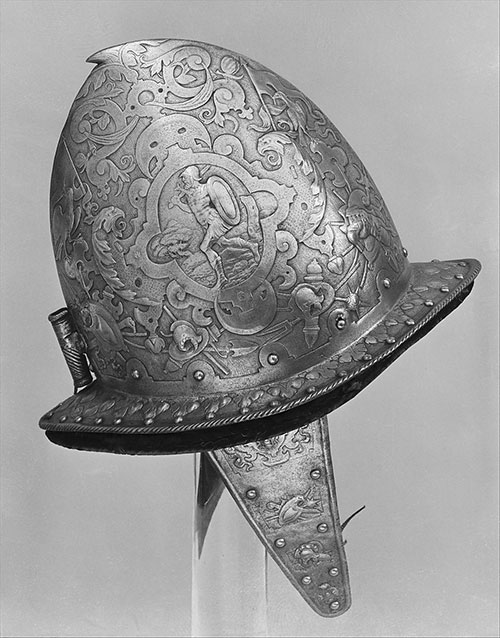 Japanese helmet of a curious shape, the 17th century. This kawari-kabuto helmet depicts a crouching rabbit, and it probably belonged to some Japanese samurai. The item is made from iron, embellished with gold and silver, and the inside part and tail are made from leather and silk. 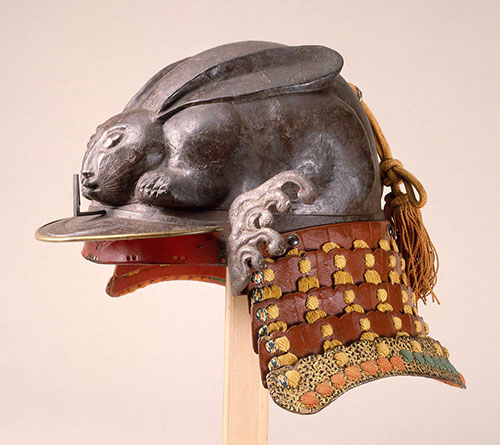 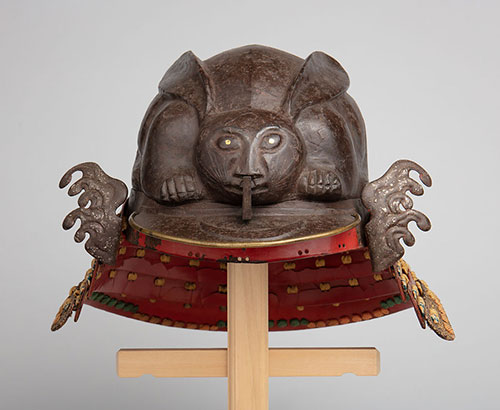 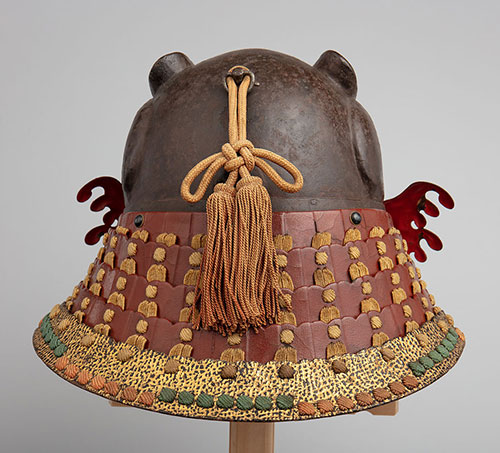 German close helmet, about 1510. It is made from steel and has few decorations. This one is functional rather than pretty.

Indian helmet of unusual design, the 17th century. It is made from iron and gold-plated. This head protection looks more like a hat than a helmet. 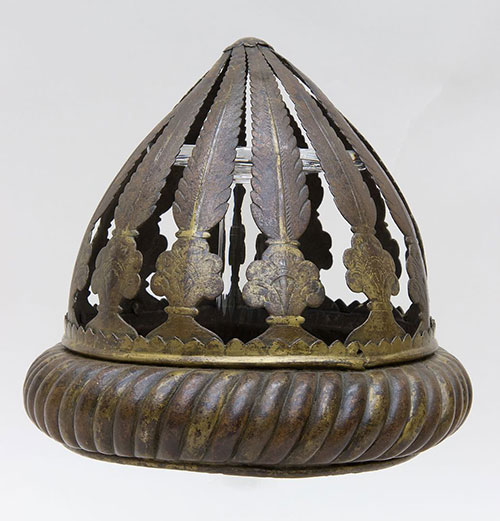 Italian beast-shaped close helmet, about 1550. Its visor is shaped like a griffin’s head (mythical creature). It also has an unusual comb at the top. The helmet is made from steel, plated with gold and silver. 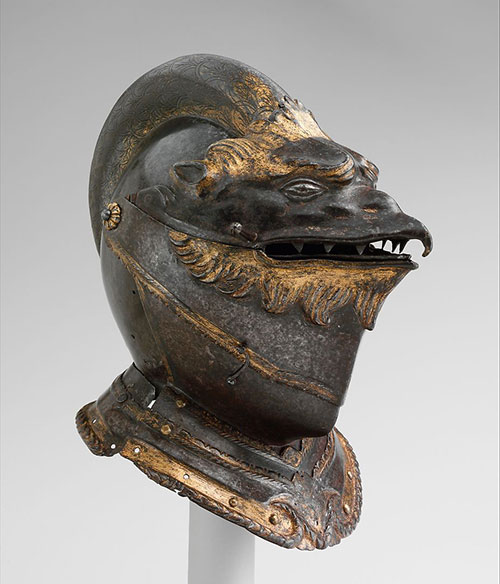 Bascinet, about 1375-1425, possibly French. The helmet is made from steel and has a cute shape. 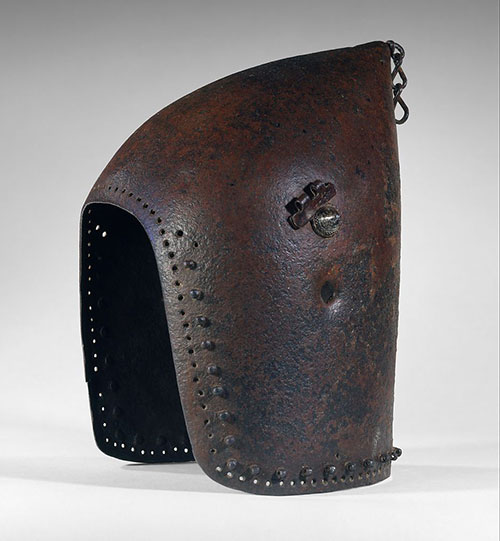 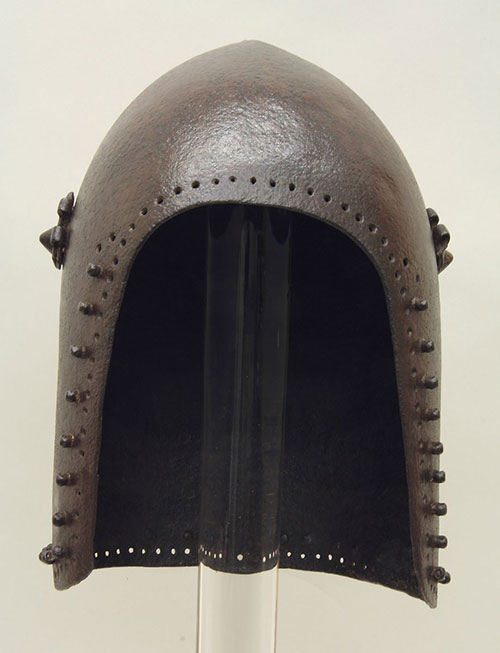