Spatterdashes and gaiters – what’s the difference between these footwear accessories?

These two shoe accessories are very similar – they cover the leg and the footwear and protect them from mud and moisture, but they’re not the same. Spatterdashes and gaiters were used as a military uniform item for a long time; civilian men and women commonly wore them as well in the 19th-20th century. Besides, they were very stylish and fashionable accessories. Let’s look at the vintage spats and gaiters, compare them, and find the differences.

The spatterdashes (also called “spats” or “spatter guards”) are accessories for outdoor wear. They’re short, they cover the instep and the ankle and protect this part of the leg from the mud and water. They’re more of a trendy status accessory. They protect the foot but not very well, as they’re rather low.

The gaiters are a similar accessory, roughly with the same purpose, but they’re higher, they cover the leg sometimes up to the knee. And they provide better protection, so they’re more of a functional item than fashionable.

Both spats and gaiters were originally made from leather or canvas. Modern gaiters are usually made from waterproof membrane fabric or some other high-tech material and used for hiking, sports, traveling, in the military, etc. Modern spats are more of a fashionable piece (often made from leather or sometimes knit) than a protection item; they’re more common among women, although, male fashionistas sometimes use chic spats. 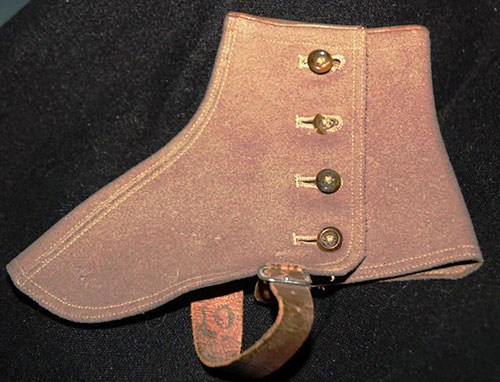 Vintage sample of felt spats. This is the left spat with leather strap and 5 buttons

The spats and gaiters, especially vintage ones, usually have a loop that goes underneath the foot and holds this shoe accessory in place. Also, as there were no stretchy fabrics in the past, spats and gaiters were buttoned-down (at the side) so that they fit the foot perfectly. Sometimes, we also see buckles added to buttons if the gaiters are high. As spats were low, there could be about 4-10 buttons, while gaiters could be equipped with 15 or more buttons or high lacing.

Among civilian men and, rarer, women, these footwear accessories were popular in the 19th – early 20th century. In the army, gaiters were widely used since the 18th century and even earlier. Often, you could see spats on fashionable gentlemen. But also, they were used for horse riding, hiking, and other outdoor activities. Remember that roads were either paved or simply dirt roads, so people were looking for some protection that would keep their shoes, socks, and pant legs clean and tidy. 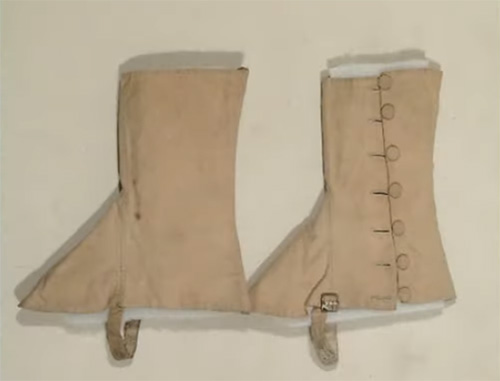 The typical materials for spats and gaiters were leather, felt, and linen.

Basically, the spats and gaiters are similar footwear accessories. They differ in size – gaiters are a lot higher. Also, their purpose is a bit different – gaiters are a functional item and spats are a fashionable piece with only some level of protection.