Charming carrick or garrick traveling coat from the mid-19th century. What’s so special about it?

In the mid-19th century, there was a specific fashionable style of overcoats. It is called “carrick” or “garrick” and it really looks charming. But what’s so special about it? What unique feature does this coat have that differentiates it from other greatcoats used in the same period? And did it have female equivalents or was it entirely male outerwear? Let’s do a little research.

A carrick or garrick is an overcoat or greatcoat popular in the 19th century (the peak of its popularity falls on the 1860s). This coat was used by gentlemen and ladies while traveling or horseback riding. It was a long double-breasted lightweight coat with one interesting feature – 3-5 cape collars that lied on the shoulders of the wearer. The coat also had a high stand-up collar to better protect the person from the cold and wind, as it was winter wear and fall outerwear. 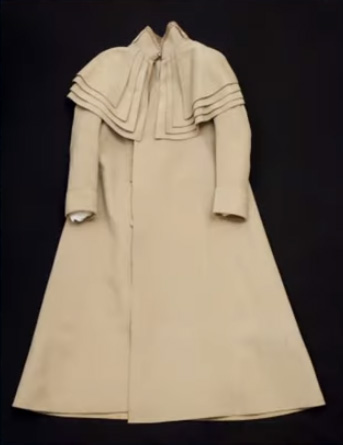 Wool pelisse with multiple cape layers from the Snowhill Wade Costume Collection. The coat dates between 1820-1830

These large cape collars or capelets that lay on the shoulders of the wearer and sometimes reached the waist (though, there were much shorter collars as well that just covered the shoulders) are a unique feature of carrick overcoats. They add a charming and elegant vibe to a simple duster. It’s a great decorative element. But maybe it had a practical purpose, too – several layers of the fabric on the shoulders and upper back could protect a person from the falling rain and snow. When you’re traveling or riding, the weather can worsen and you aren’t able to hold an umbrella. In the 19th century, there were no synthetic waterproof fabrics invented yet, so people used whatever they could to protect themselves from precipitation.

Most fashion historians consider the carrick overcoat to become trendy somewhere around the 1860s, but there is some evidence that it existed a bit earlier, at the beginning of the 19th century. For instance, here's an illustrated example of a French gentleman's carrick greatcoat from an 1811 fashion plate. 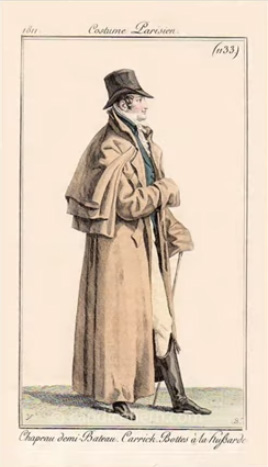 A carrick could be used by both men and women but it gained more popularity among gentlemen. At first, it was more of a men’s garment, women started to wear coats with capes later, in the Empire period. Ladies sometimes wore pelisse coats with cape collars even before the carrick appeared but they didn’t typically have multiple cape collars, only one.

Carrick coats were typically lightweight outer garments. The most common materials used to sew it were thin wool, linen, cotton, and their blends. Winter carricks were warmer and could be trimmed with fur.