Kids’ footwear in the Western world in the early-mid 1800s was a prerogative of wealthy or at least middle-class families. Many poor children went barefoot, especially in rural areas, or wore cheap and coarse shoes, which they had to use for years, so such footwear usually was very worn and didn’t survive to this day. But wealthier families bought lovely shoes for their little ones, often rather costly and fine items. A lot of them are now stored in fashion museums, folk museums, and private collections, so luckily, we’re able to see them up close.

Most kid shoes were made from leather or leather combined with fabric, though, infants often were dressed in canvas footwear (velvet, silk, etc) because it’s softer.

At the beginning of the 19th century, low-cut shoes were more common among both children and adults. Closer to the mid-late 1800s high-top footwear became trendy – boots, high laced shoes, and so on.

If to talk about the color, 19th-century people weren’t shy to use rather brightly toned footwear. The very common look of this period’s shoes is two-colored (black&pink or brown&pink) design.

Here are two variants of such vintage duo-toned kid shoes from The Met.

Tiny American black&pink kid shoes from around 1860 with button closure. According to The Met, such children’s footwear in the 19th century was usually fastened with a tie, while button closure is rarer. Besides, the buttons here are very decorative. 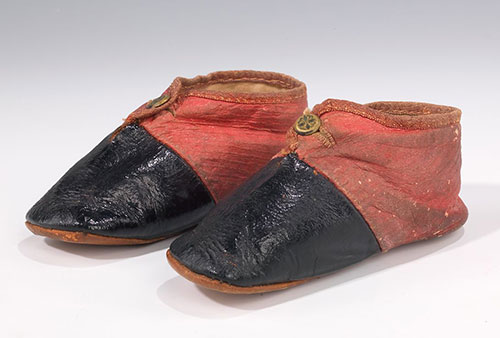 Another pair of two-colored child’s shoes – brown&pink leather shoes. These are also from America and dating 1832-1833. This pair is laced. Another interesting thing is that these particular shoes were used by a boy. In general, red and deep pink were considered male colors up until the beginning of the 20th century, so boys often wore similar pink shoes, which is unusual for a modern eye. 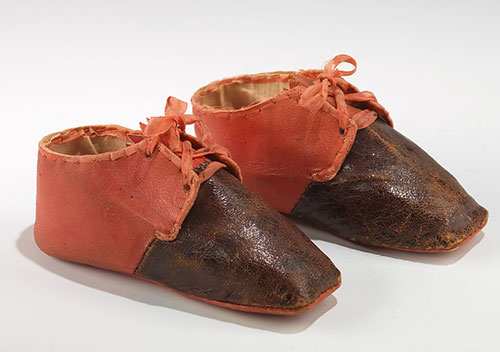 But not only these shades were popular, brightly colored footwear was rather common – red, pink, blue, canary yellow, forest green, and other shades that might seem a bit too vivid for a modern eye were very widespread. But probably the most popular color was copper or bronze.

Here are red&black boy’s laced boots. These are from Europe, 1885. They are made for a 6-7-year-old boy. This footwear really looks bright and chic, with lacquered toes, high lacing, and brightly-colored fabric. This accessory is from a private collection of Marina Ivanova (private Museum of history of fashion in Kyiv, Ukraine). 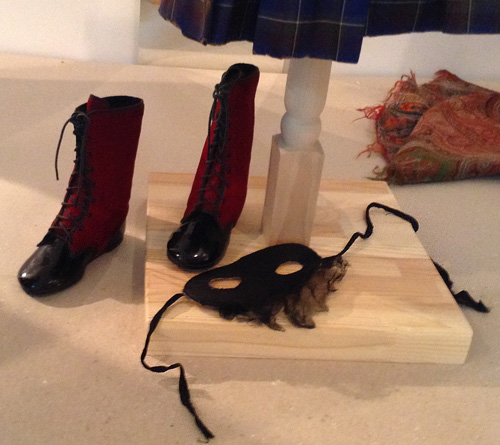 But not always kid shoes were red or pink. Very often, they were made from black leather or dyed so-called “bronze kid” (copperish or purplish-brown color) and skillfully adorned with embroidery, cutout, bows, lace, etc.

A very typical feature of the 19th-century kid shoes is an ankle strap, usually secured with a button. On the next pair of infant shoes, we see such a leather ankle strap. This kid accessory actually required some skill and effort to produce. There are a lot of decorative elements – a snowflake-shaped cutout on the toe, a bow tied through metal eyelets, white topstitching on the seams, and a decoratively-cut serrated tongue. This kid footwear is American, from 1880-1885. And it’s from The Met. 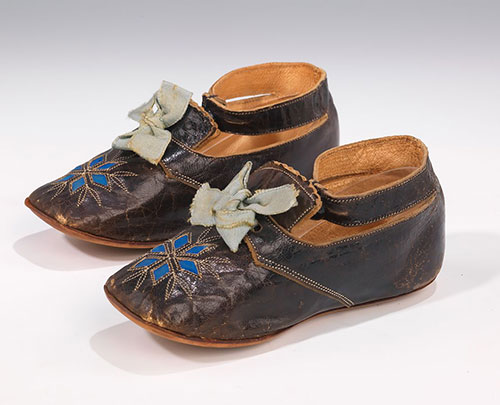 This pair of child’s shoes are of a bit simpler design, but they’re high-quality, produced from fine leather. They’re from Europe, 1850-1869, stored at The Met. They are equipped with a delicate ankle strap, though, these shoes are not for an infant but for an older child. The design is very similar to women’s shoes of the period, with the exception of the mentioned ankle strap. There are only two small decorative elements – teeny-tiny bows and metallic-painted buttons. 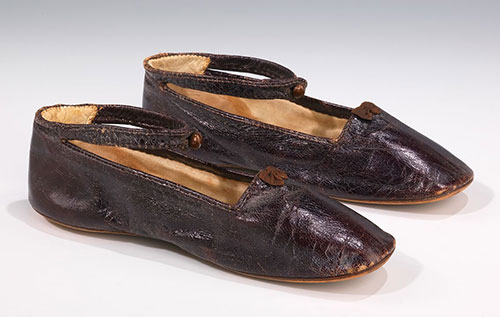 And the last pair of kid shoes for today are 5-year-old girl’s leather slippers. They are French, dated 1866, from The Met. The design of these shoes is very typical for 19th-century women’s footwear, especially the decorative chain-stitched cutout pattern. These are morning shoes, not festive footwear. They look really soft and comfy. 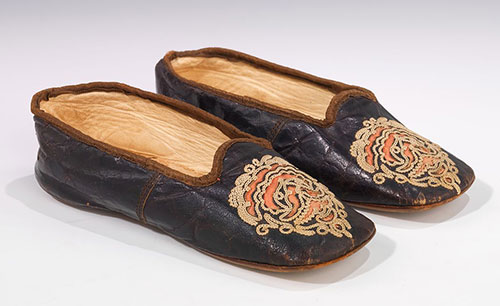 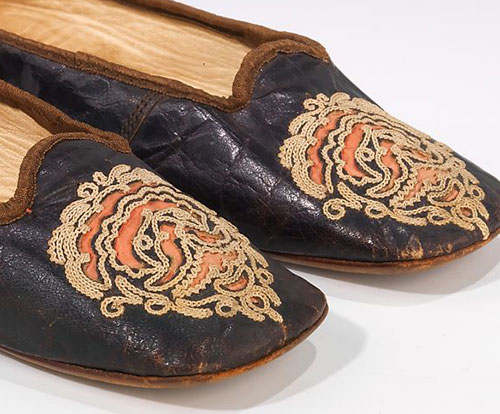 All the kid shoes shown here look wonderful. Of course, these are by far not the only kid footwear designs common for the 1800s. But we chose these examples to show you because they are rather typical for the period and have a lot of specific features seen on the 19th-century children’s shoes. Note how modern kid shoes designs are similar to these – for example, ankle straps are still popular today.