Have you ever heard about clothing made from fishskin? That’s right. It’s possible. And many Arctic ethnic groups often used such an odd material to create waterproof clothes and accessories, like pouches, bags (even rather large ones), mitts, shoes, etc. These items look bizarre and unusual. And also, just imagine how hard it is for museums to preserve, mend, and exhibit fishskin folk garments. Obviously, very few vintage fishskin pieces of clothes reached our time.

The indigenous Arctic peoples (Inuits, Aleuts, Eskimos, Chukchi, Evenks, Yupiks, etc) who live in the most northern parts of the world – Alaska, Greenland, northern regions of Russia, Finland, Iceland, etc – originally had a very limited assortment of natural materials that could be used to make clothes. In the past, there were no artificial fabrics, like fleece or membrane fabric or synthetic cloth, so people could only use what they found in their surroundings. While ethnic groups who lived farther south used plant fibers, northerners didn’t have such a luxury. Most of available for them materials were animal skins, leather, and fur.

Soon, they found a way to expand their choice of materials by adding fishskin (most often, it’s king or silver salmon skin, but not only that). Maybe you would be surprised, but fishskin is sometimes used to create clothing and accessories even today in the so-called Circumpolar North. 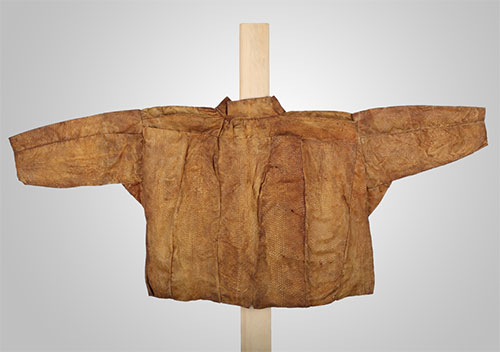 Aleut fishskin kid’s jacket from the 1880s. It is now stored in The Seweryn Udziela Ethnographic Museum in Kraków, Poland

Some aboriginal Arctic people created real masterpieces from fishskin. Among them, waterproof fishskin parkas and jackets, bags and pouches (called “kellarvik” and “qemaggvik” by the Yupik people), mittens and shoes sewn from fishskin, and some other objects. There are known and preserved items made somewhere in the early-mid 19th century.

How to make clothing from fishskin?

First of all, the fish must be large so that its skin was bigger and stronger. The meat is divided from the skin, the extra fat is removed as well. Then, the clean skin is soaked in urine to remove fat and oil and to prevent decay. After some time, the skin is removed from urine and rinsed. It can be oiled with fish oils or animal brains to make it waterproof and more flexible. Then, the skin is left to dry. The skin is also kneaded by hands for a long time to make it softer.

Sometimes, the skins are smoked or freeze-dried, which also changes the color of skin – smoked skin is darker and freeze-dried skin is paler than the natural color. Different shades of color help create a pattern on the ready item to make it more decorative, not just functional.

By the way, such processed fishskin is rather waterproof – this material is naturally created to be in the water and the oil makes it even more water-repellent. 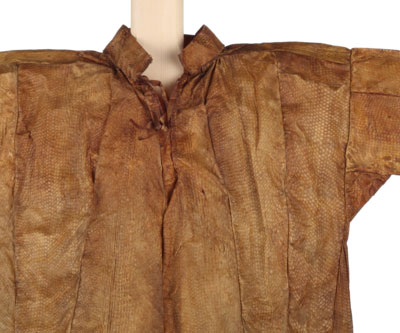 The fins on fishskin are removed and the holes left after that stitched closed. Of course, you would need several skins to sew a jacket, so animal or fish (beluga whale or reindeer) sinew was originally used as threads.

Usually, the skin is turned scaly side facing outwards (but note that there are no scales anymore, they’re long since removed), so you can see a beautiful scaly pattern on the surface.

How did they use fishskin clothing and accessories?

Waterproof fishskin parkas, shirts, and jackets were worn over fur parkas and other clothes made from leather and fur. They were the uppermost layer because they didn’t give any warmth, just protected from wind and rain/snow. Even children were dressed in small fishskin parkas when they went outside to play and work. 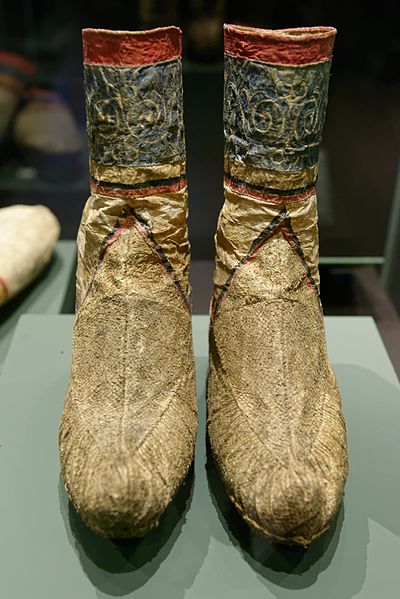 The fishskin bags were used for both storing things inside of a dwelling and to carry things when going outside, for example, berries could be gathered in such pouches or water could be carried in it (that’s how waterproof they were!). By the way, the thickness and flexibility of a fishskin bag were different – those for inside usage often were much softer and thinner, while the ones for outside usage were coarser and thicker.

It’s amazing how indigenous Arctic people used even such strange materials to suit their needs. And these vintage clothing and accessories found in different museums around the world sometimes are so decorative and delicate that you keep wondering, how they were able to create something like that?!