Top-10 most offbeat traditional shoes around the world

Every part of the national costume of any country was created according to the traditions, beliefs, and environmental conditions. And shoes aren't an exception. In fact, they are often the most demonstrative piece of a traditional outfit. There are plenty of extraordinary and even odd shoes that are being used by millions of people for centuries, no matter how inconvenient and strange such footwear can be. We chose for you 10 most unique and offbeat traditional shoes in the world.

This footwear was used in China from the 10th century till 1945. These shoes are very special because only women who practiced foot binding could wear them. Foot binding is a practice of deformation women's feet to keep them very small. Because of tight binding, the feet of young girls stopped growing. It is a very painful process; still plenty of females traditionally did it. At first, only noblewomen were binding their feet and wore such shoes, but in time millions of women all around China began to do the same in an attempt to imitate the upper classes. Lotus shoes were designed to resemble a lotus bud. They were tiny shoes made from cotton or silk. Some lotus shoes had a flat sole, and other variants were with heels or wedge-shaped soles. But this footwear was always richly embellished (with embroidery, gems, needlework etc), including the sole. Many lotus shoes were handmade, but there were also factories that produced such footwear. 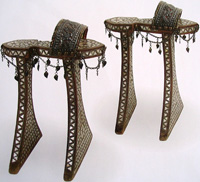 Such footwear was popular in many countries that were under the Ottoman rule (Lebanon, Turkey, Syria etc.). Some scholars consider that the origin of kabkabs is Lebanese. They appeared about the 14th century. Kabkab shoes were invented to protect the feet from the dirt on the streets. Also, such footwear was used in public bathhouses to protect the feet from hot water, dirty and hot stone floor, and runoff from other people having a bath. Kabkabs were usually wooden, richly embellished with mother-of-pearl, silver/gold or intricate carving; they also had straps for the feet (made from leather, silk or velvet). The name "kabkab" was given to such shoes because of the sound they made on the marble floor. This is female footwear but men sometimes used such shoes in baths.

These are different names of similar shoes. They are made completely from wood and worn over thick socks not to injure the feet. It may be hard to believe but such shoes are rather comfortable to wear and very safe (they protect the feet from sharp objects, very hot and cold surfaces, and even acids). They are also easy to put on and off. Such footwear is used even today by some farmers and gardeners, but mostly clogs are produced as souvenirs for tourists. They are used by folk dancers as well. That's why clogs are often very beautifully painted and embellished with carving. Of course, wooden sabots were handmade during centuries, and often the craftsman carved clogs individually for each customer. But at the beginning of the 20th century, clogs started to be machine-made.

These shoes have very elongated toes (sometimes up to 5 feet or 1.5 m), curled up toward the knees. They became popular in Mexico around 2009. Mostly musicians from electronic music bands used them, but quickly Mexican pointy boots found their fans all around the country. Such shoes are festive and ornate. They can be decorated with sequins, flashing LED lights, tinsels, disco balls, mirrors and other similar elements. Mexican pointy boots are still used by music bands and dancers in Mexico. Such footwear looks rather grotesque and very unusual. 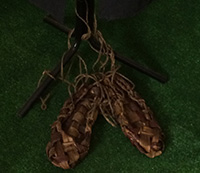 This kind of shoes was very popular among the poor people of Europe and Russia. They were widespread in those countries with thick forests. Bast shoes are handmade from the bark of a birch tree or linden tree. There is a special technique of weaving them but it is rather simple. People liked such shoes because they were easy to make, very cheap and relatively comfortable. Though, one pair of this footwear last only for 1 week. Bast shoes were worn over the cloth foot wraps not to injure the feet of the owner. Nowadays, they are still used by some people in the backwoods of Russia, Finland, and some other countries but they are very rare. 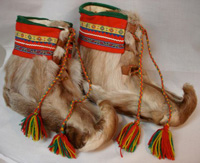 These shoes are made from reindeer fur. They keep owners feet warm even in a very cold Finnish climate. Saami reindeer boots usually have pointed and hooked toes which are useful for skiers (in Northern countries people often use skis to travel through deep snow). To make Saami reindeer boots, craftsmen use forehead skin from the reindeer's skull for the soles and skin from the forelegs and legs for the upper part. Sinews are used as threads. The shoes are tied to the leg by colorful ribbons. The color and pattern of these ribbons can be various, depending on the gender, native region of the person and so on. But the most popular colors are red and blue. Such shoes look very festive and unique.

These shoes are traditional in Greece. Today they are widely used by the Greek guards known as Evzones. It is a part of their uniform. Also, many folk dancers wear such footwear. But tsarouhi were very popular in all regions of Greece untill the 19th century. These shoes look festive and a little odd. Tsarouhi are leather moccasins with a small hill or without it. They usually have pointy noses. But the most unusual element of tsarouhi is a large woolen pompon situated on the toe of each shoe. Very often there is also embroidery or embossing on leather to decorate the footwear. Tsarouhi are very comfy shoes, in comparison to other traditional footwear around the world.

These are extremely beautiful and delicate mostly women's shoes. They are interesting because there is no difference between the right and left shoe, so you can wear them interchangeably. Another unusual thing is that there is no exact size. They are handmade without a model. You just try several pairs on until you find the one that fits. Khussa shoes are made of leather and very richly embellished. Gems, ceramic and metal decorations, beads, mirrors, embroidery, embossing on leather, cutting and many other decorations are used to make this footwear look ornate. Sometimes mojari shoes have a very narrow sole at the heel, which makes them look delicate and very feminine. Khussa shoes are worn in many South Asian countries since the 17th century and till today. 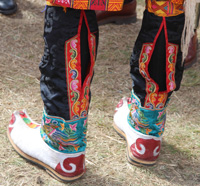 These are very beautiful shoes. For a long time, only wealthy people in Bhutan wore shoes at all. Most of Bhutanese walked barefoot. The traditional footwear of this country is called "tshoglhams". These are the knee-length woven boots with upturned toes. They are richly embellished with colorful embroidery. Tshoglhams usually consist of three parts that are made individually and then sewn together. Such materials as leather, cotton, and brocade are used. The lower part is usually white with leather appliqué; the middle part is made from brocade and richly embroidered (images of dragons, phoenixes, flowers etc.), and the color of this part shows the class and occupation of the owner; the upper part is long, made of silk brocade or woolen material with patterns on fabric. Tshoglham boots are very comfy and look gorgeous.

These traditional shoes are pretty modern – they were invented in the 20th century. Tabi boots are based on traditional Japanese split-toe socks called "tabi". Actually, jika-tabi can be worn with additional thonged shoes, but usually, they are separate footwear. Tabi boots are usually tight-fitted, the upper part is made from fabric or leather, and the sole is rubber and rather soft. Such footwear is very comfortable, quiet, and – you won't believe – their shape helps the wearer to use his feet as an extra pair of hands (for example, he can hold objects between the toes). Jika-tabi are favorite boots of farmers and gardeners in Japan. Such footwear is very unique and unusual, it definitely draws attention.