Traditional clothing in Ancient Rome. What did they wear?

Most people have heard at least something about the typical clothing of Ancient Rome. The word “toga” is familiar, isn’t it? But if you think that a toga is just a bed sheet wrapped around the body, then you absolutely must read this article. You’ll find out that the Roman clothing tradition is much more complicated and entertaining. For instance, did you know that fashionable hairstyles changed so frequently that Roman marble busts of women sometimes had removable hair so that the hairdo could be kept up to date?

We can’t overemphasize the importance of a tunic in Ancient Rome, and this would prevail throughout the Dark Ages, the Middle Ages, and etc.

Both men and women in Ancient Rome wore tunics beneath either their togas (men) or their stola (women). Do not confuse the Roman look with that of Ancient Greece, where men could wear the himation as an achiton with nothing underneath. The Romans wore togas, which were structured differently, and they wore a tunic underneath it.

But, of course, when we think of Roman fashion, we think of togas. Togas were worn by men. And they were not just a rectangular piece of fabric like the himation – they were structured.

The Republican toga (which is what the patricians would wear) would be 12-14 feet long and 6 feet wide. However, Caesar the Emperor and his male family members would wear a toga that was longer, wider, had more fabric, and was just more spectacular.

How do you put a toga on? First, you wore a tunic. And then, you wrapped a toga around your body – actually, you usually needed a slave to help you get into one, to wrap it around. The toga goes over one shoulder, then it is wrapped around and pulled around the waist, and then the flap that you're working with folds over your arm.

But you had to be a Roman to wear a toga, nobody else was allowed to use it.

Variety and meaning of toga

There were so many varieties of toga and meanings behind them. This was really using fashion as such a significant article to show who you were, when you were living, and what you belonged to.

Let's look at the main different kinds of togas.

The toga virlis. This was worn only by young men when they first came of age (14-16 years old). It was also worn by lower members of the Senate. It was a whitish toga, a natural color of the fabric, not bleached.

The toga praetexta. This was worn by boys before they came of age and by slightly higher members of the Senate.

The toga picta. This was worn by triumphant generals or people who are presiding over gladiatorial games. Sometimes it was embroidered.

The toga candida. This was the bleached white tunic that was only worn by higher members of the Senate.

The toga trabea. This was only for the emperor and select members of the royal family because of its color.

There were many other different kinds of toga for very specific occasions: days of honoring a particular god, wedding, etc.

From the 2nd century B.C., it was illegal for Roman women to wear togas. Although, weirdly, if you were a prostitute, it was okay.

Only emperors and members of the royal family were allowed to wear purple. The color was very hard to find and very expensive. Before it was synthetically manufactured, purple (“tyrian purple”) was only available from a mucous secretion of the murex sea snail. This made it incredibly valuable and rare.

Here is this sea snail, and in its mucous gland, comes the dye that makes tyrian purple. 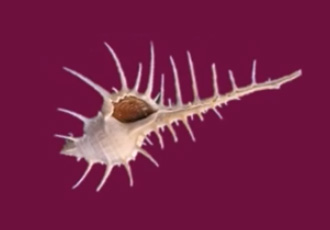 As a consequence of its rarity, it was only worn by royalty, both in the days of Rome and for centuries beyond. This reddish-toned purple is also known as Imperial Purple, Royal Purple or Tyrian Purple.

Let's look at Roman female attire. Again, as with the Greeks, it is based on three articles of clothing that were worn at the same time: a tunica intima (an intimate tunic), a stola, and a palla. Then, the whole ensemble was belted. 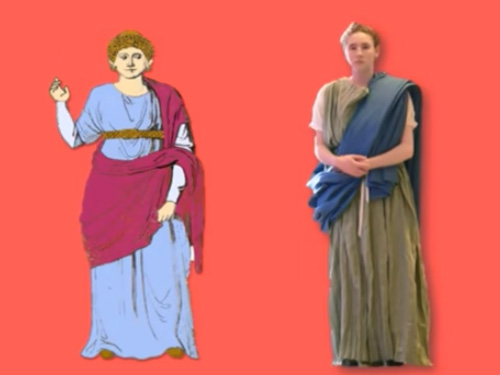 The tunica intima was a long- or short-sleeved tunic that was worn beneath the stola.

The stola was a long linen dress, usually with three-quarter length sleeves. There was a lot of pleating in it, a lot of draping.

The palla was a rectangular mantle or cloak of varying textiles and weight (depending on weather and occasion), which you would wrap around the stola. The palla was put on in the same way that a Roman man would wear his toga.

The attire was usually made of linen or, if you lived in a colder climate, wool. If you were rich, it would be made of silk, acquired along the Silk Route, and embroidered. The outfit in the picture is probably a plebeian dress.

The hair in the Roman period was very done up. One of the key hairstyles was called “titulus” (the strands of hair were pulled into a top knot at the back). Another hairdo was called “severan” (a lot of this hair was probably made with wigs and hairpieces). And one more popular hairstyle was called “flavian” (this pile of hair mounted on top of the head was, most likely, a hairpiece). 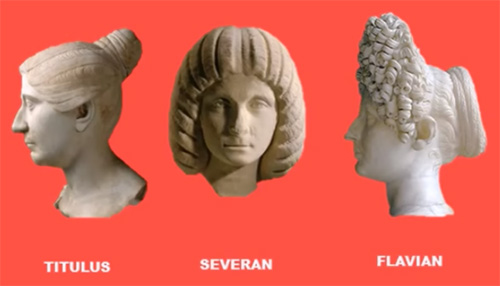 Hair was extremely important to the Ancient Roman women, it was the erogenous zone. The hairstyles and fads and hairdos were so important and the trends in hair changed so frequently that Roman marble busts of women sometimes had removable hair so that the hairdo could be kept up to date.

But if to talk about the Ancient Roman men, their hair wasn’t so important. These were serious people, these were military people, so the most popular haircut was a short hairdo with bangs, brushed forward and cut short.

Guess what, gladiators did not wear gladiator sandals. In fact, Romans didn't wear sandals very much at all. They wore shoes.

Here are actual Roman shoes that have survived. They were found in York, England, where was a big Roman Empire settlement back then. These shoes are made from leather, they have soles, and they would be laced to hold them in place. 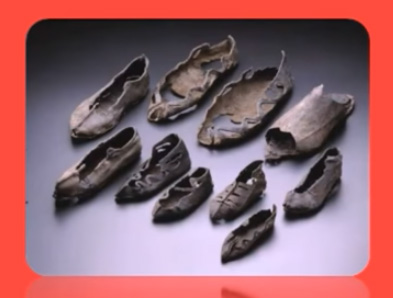 This is another genuine pair of Roman shoes. 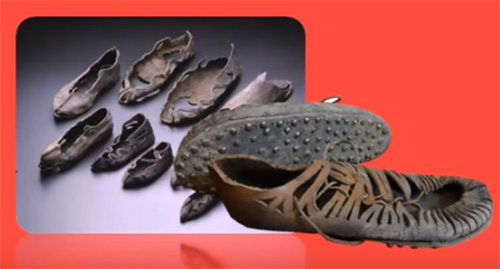 Gladiators did not wear gladiator sandals. They wore shoes and then they had these leg protectors, sort of like a hockey player, tied around their lower legs. Usually, they were made out of leather.