Navajo traditional costume and jewelry. Each element represents something significant

Here is the traditional outfit of a Navajo woman. It includes several significant pieces that have a deep sacred meaning. Local Navajo girls will tell us a little bit about their folk costume and what each element of the attire represents. This Native American culture is really interesting and unique. The Navajo people have their beliefs, myths, gods, and spiritual knowledge – all of that is shown in their traditional dress and jewelry. So, let’s find out more.

Navajo are a Native American people of the Southwestern United States. It is the second largest federally recognized tribe in the U.S. They have the largest reservation in the country. The Navajo culture is rich and symbolic.

These are Navajo moccasins. They are called “ke ntsaai”. The bottom part (sole) of the moccasins represents the “father sky”, the top part represents “earth”, and the wraps represent “rainbow and sunbeams”. 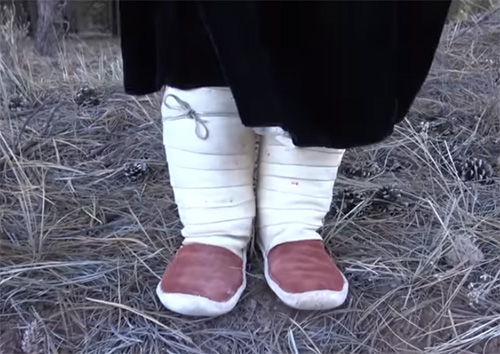 This type of moccasins is only worn by females.

There is another type of moccasins called “kelchi”, which is just a plain moccasin without the wraps.

The Native Americans don’t wear their moccasins with jeans or other modern clothing articles because it doesn’t look appropriate. Their ancestors never wore it like that.

Now, this is a rug dress or it's called “biil ee’” in Navajo. The whole biil ee’ represents the “universe”. Most rug dresses had a line on them, which represents the “rainbow” and the “sun ray”. So, that's what these purple lines represent. 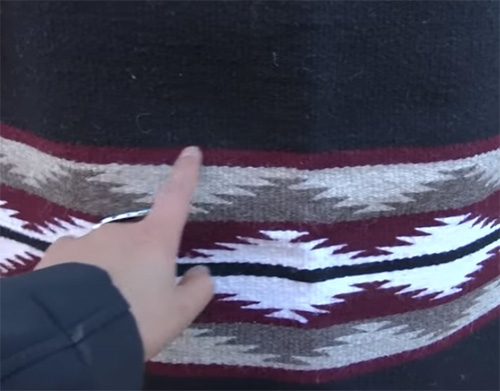 The notched (or jagged) designs represent the “sacred mountains”. The ancestors of Navajo tribe lived near the mountain peaks of New Mexico, so mountains are traditionally considered sacred or blessed. That's why this woven garment has such designs on it.

Also, on any type of rugs and on the biil ee’, they have these – I guess you can call it “fringes”. They are situated on the edges of the rug dress. This represents the “female rain”. 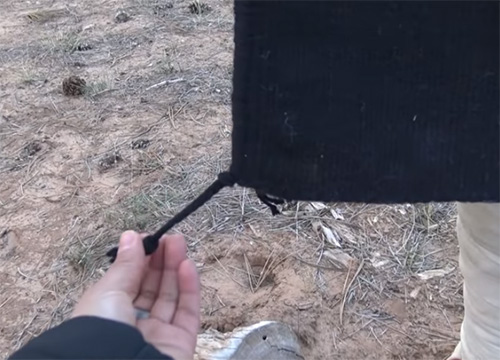 The outfit the woman is wearing here is not so traditional, it was kind of adopted. Back then, the Navajo people wore mainly sheep wool and buckskin. This type of material – velveteen, satin, any other type of material – is adopted from the Spaniards. So, this is kind of a Spaniard type of clothing, but this is what the Navajo adopted from them and started making clothing from these fabrics. But it's still considered sacred as well and they still wear them to this day. Though, the biil ee’ rug dress and any type of buckskin is more sacred and is more valuable for the Navajo people.

This traditional woven belt is called “sis lichi’i”. It also represents the “universe”, and the lines on the bottom represent the “rainbow”. If there are designs on the belt, those would represent the “sacred mountains”. 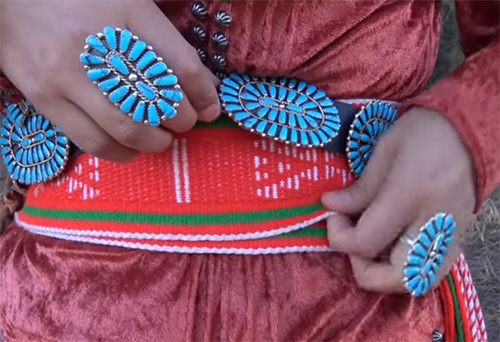 And these sort of ropes on the side represent the “female rain”. Also, these ropes represent the “sacredness of the menstrual cycle for females”. That is why only females should be wearing the sis lichi’i. This belt can also be used to pull on when the woman is giving birth. 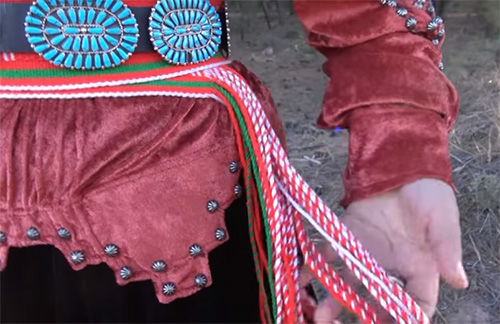 Here is a medicine bag that Navajo girls wear. It's worn on the right side because it's their “warrior side” and the bag is used for protection. Inside, there are herbs and different minerals. The Native American Indian women don’t show them to others – they’re also considered sacred. They only bring them out for praying and ceremonies. 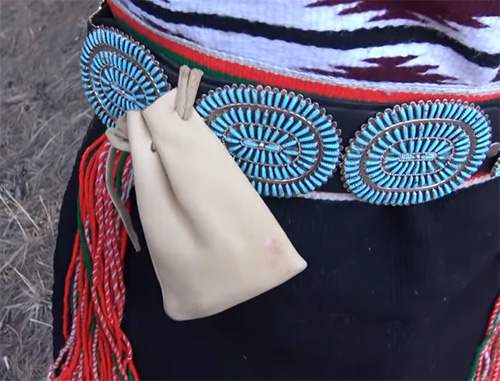 Let’s move on to the jewelry part of the girl’s outfit. This is the jewelry item called “sis ligai”. It's worn for the protection of female internal organs. It’s like an amulet of some kind. 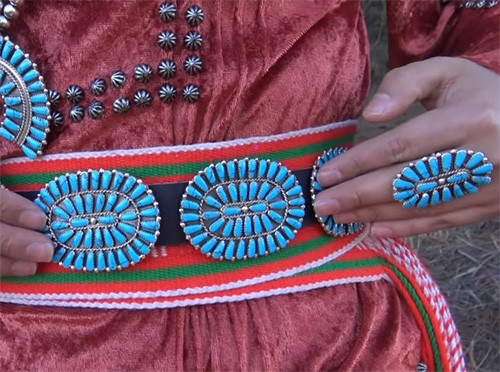 The necklace is called the “yoo’”. What does this necklace mean? It starts on one shoulder and then goes all the way around to the other shoulder. This represents your lifetime. 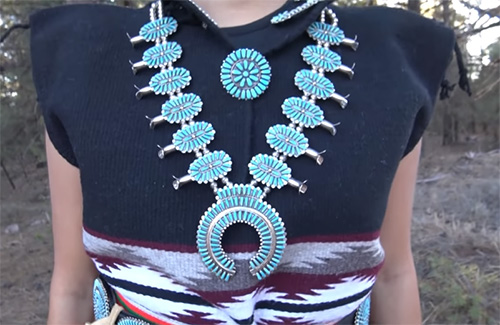 The centerpiece of this necklace that hangs down near your belly button represents your umbilical cord, thus your connection to your mother.
This necklace is kind of protection for a person as well.

Another jewelry item is the pendant called “yoo’nilchini”. This represents the “sun” and the “brightness that comes from the sun”. And it also represents White Shell Woman (Native American goddess), this is her heart and her soul. So, women wear this pendant for White Shell Woman always to be with them. 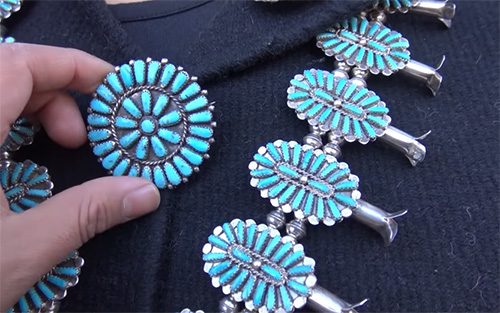 The earrings match the pendant. They are called “jaatl ool”. These earrings represent that you only hear good things, they keep all the bad and the evil away from your ears. Jaatl ool protect the person like an amulet. 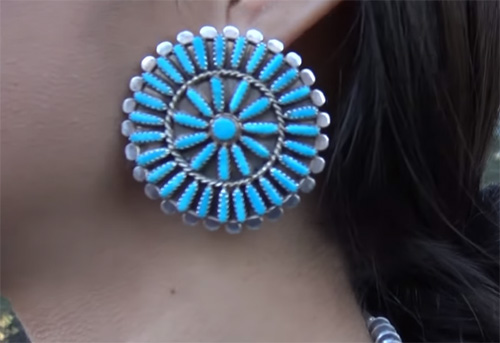 The bracelet is called “latsini”. It is like a girl’s version of a shield. Native American men also have a similar bracelet but they can only wear it on their left hand, while females can wear on both hands. 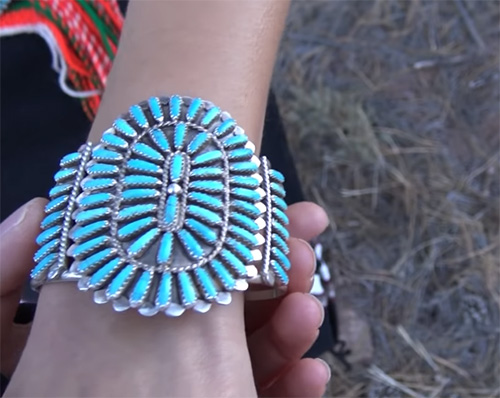 This bracelet represents protection as well. It is a women’s version of a bow guard or shield that protects them from any type of evil or danger in the world.

Let’s move on to finger rings. They represent the guidance in life, that a person can follow the right path. Rings protect Native Americans as well.

Actually, any type of jewelry that Native American Indians have, represents protection. As does everything that they wear and the stones that they wear.

Here we have the “tsiiyeel”, the Navajo hair bun. The strings that hang down represent the “sunbeams” and the hair represents the “rain”. Hair also symbolizes your knowledge and your teachings – that's why Native Americans don't cut their hair short. When they tie the hair up like this, it symbolizes that they keep their knowledge, their teachings, their wisdom all together. 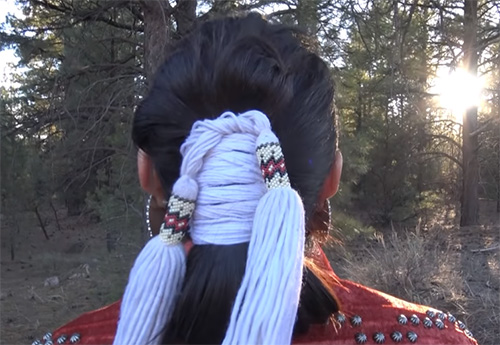 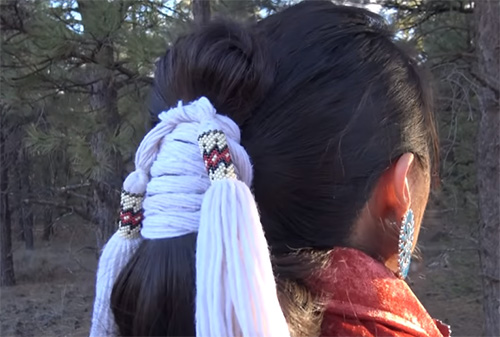 Also, when the hair is tied up like this, it symbolizes the medicine man's bundle and whatever they collect from the sacred mountains and use for ceremonies.

So, these were the most significant pieces of a Navajo women’s costume. I must say they are not only symbolic but also beautiful.